While here at INN we have endeavored to cover the events of this war as they occur, we wanted to take a step back and give readers a sense of the broad sweep of this war. This is Part One of what will be a series of posts covering the conduct of the war so far, in as comprehensive a manner as this author can cover it.

Like many wars throughout human history – and that of New Eden – it is difficult to pinpoint exactly when this one began. In one sense it started just over two months ago when the Imperium officially aligned with Legacy Coalition, formed the Imperial Legacy, and embarked on its current offensive across Fade and Pure Blind.

In another sense, it started earlier, when Pandemic Legion – motivated by the desire to take advantage of the changeover to faction Fortizars – engaged in an invasion of Providence that bogged down and ultimately turned sour as Legacy Coalition defended the space, drove PL out, and settled into a sustained conflict with local PanFam allies.

In still another sense, it is a natural outgrowth of the lesson first learned the hard way by Triumvirate earlier this year, but with implications for all of New Eden, that an onlined and operational Keepstar is not invulnerable. This war has already reemphasized that lesson many times over.

And in the eyes of many, it is merely a continuation of the last war – known as the “Casino War” by the Imperial Legacy and as “World War Bee” by Northern forces. A few of the faces since then have changed seats at the table. In particular, Circle of Two, which famously turned on its Imperial allies during the previous war, has moved firmly into the Northern ambit both geographically and philosophically. Meanwhile, TEST Alliance Please Ignore and BRAVE – which make up the bulk of the Legacy Coalition – have seen their once-friendly relationships with the North become frosty, and then overtly hostile, driving them into the ambit of their former foes in the Imperium.

That background – itself rooted in a deep tapestry of history dating back to the origins of Eve itself – brings us to the opening salvoes of what has become a two-front, global conflict between the galactic North and South. That conflict really began in earnest with the battle for 6RCQ.

Imperium leader The Mittani announced the alliance with Legacy Coalition and the invasion of the North in a fireside chat at the start of July. On July 8, the Imperium anchored an offensive staging Keepstar in 6RCQ-V, opening a new front in the conflict between PanFam and Legacy Coalition forces, and taking some of the pressure off Legacy’s ongoing war to the East. A sizeable contingent of Northern forces including Northern Coalition, DARKNESS, and Pandemic Horde formed to contest the Keepstar’s anchoring, but were unable to combat the massive combination of the Imperium’s combined shield and armor super fleets, augmented by support from Legacy Coalition in the inaugural engagement of the new Imperial Legacy. The Keepstar successfully anchored, and the Imperium had its beachhead in the North. 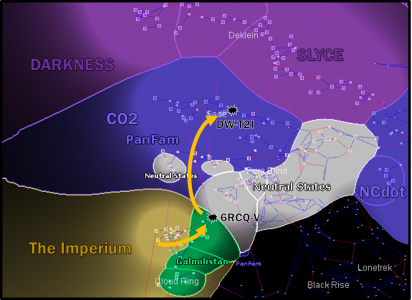 Attempting to capitalize on the momentum of its new offensive, Imperial Legacy forces attacked and reinforced CO2’s staging Keepstar in DW-T2I, with the goal of dividing the Northern forces’ attack against TEST’s Keepstar in 4-GB14, and forcing the North to fight simultaneously on two fronts. However, the Imperium offensive temporarily stalled due to Northern forces’ superior understanding of cyno jammer mechanics.

During the run-up to the fight for the DW- Keepstar’s armor timer, Northern forces installed a cyno jammer in-system. Imperial Legacy commanders were under the impression that a player-owned station (POS) could not have additional equipment installed while under reinforcement. However, while it is true that a POS containing a cyno jammer cannot online it after the station has been reinforced, if the station owner anchors a new cyno jammer after the POS is reinforced, it can be onlined due to the fact that it does not require CPU.

Imperial Legacy command failed to take this mechanic into account, allowing the North to online a cyno jammer after the Keepstar was put into reinforcement. The Imperial Legacy forces attacking the system were stymied, and the TEST Keepstar in 4-G died.

While the headline engagements were taking place in DW-T2I and 4-GB14, Legacy-aligned Provi-Bloc also took advantage of the fact that all eyes were elsewhere to anchor a new Keepstar in 9UY4-H, under the cover of cyno jammers in much the same way CO2 protected their DW-T2I Keepstar. 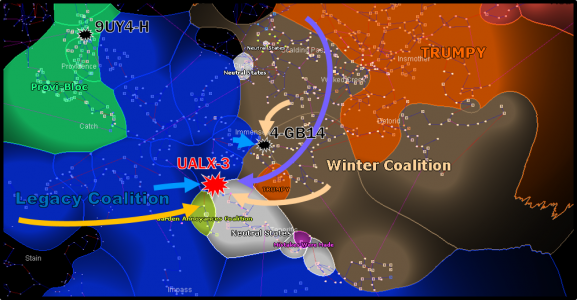 The Imperium offensive’s temporary setback in DW-T2I saw the war’s momentum temporarily shift to the East, when Legacy Coalition attempted to anchor a new staging Keepstar in UALX-3. In response, a massive call to arms by Northern forces opposed the anchoring, and Legacy Coalition’s Imperium allies came from the west to help defend, setting up one of the largest battles in Eve’s history, a twelve-hour engagement that was (at the time) Tranquility server’s second-largest ever behind the Battle of 9-4RP2 early this year.

The Keepstar did not survive the Northern assault. But the station’s strategic importance was, in fact, secondary to the importance of the massive titan fight, in which both sides committed the bulk of their resources to battle for the first time. Not all of those forces made it into the fight, however. Just as the Imperium armor supers jumped into system and before the NCdot supers were able to engage, the sheer size of the battle crashed the UALX node a mere 45 minutes before downtime.

This set up a situation in which Legacy Coalition was able to snatch an ultimate victory from the jaws of what initially appeared to be a strategic defeat. Rather than risk losing their supercap fleet en masse by logging back on after downtime, Northern forces decided to stay logged off in order to extract their ships later. Led by TEST and BRAVE, the Imperial Legacy set up a round-the-clock “hellcamp” of the system, anchoring a Fortizar at the site of the battle to prevent an easy escape, quickly tackling and destroying any enemy ships that logged on, and bogging down the Northern supercap forces for days.

After a week of seeing the bulk of their supers stuck in-system, Northern forces locked in UALX-3 finally staged a breakout. With their Northern attackers tied up, TEST quietly anchored a second Keepstar in the system during the Hellcamp without further resistance.

The stage was now set on both fronts, and the game had begun in earnest.

The War in the North: Part 2 – The Turning Point