The War in the North: Part 2 – The Turning Point

The events of UALX led to a series of smaller engagements across the galactic northeast. Perhaps sensing the war’s momentum, even as the UALX hellcamp was still underway, NCdot formed up in what initially appeared to be a defense of three Mordus Angels faction Fortizars reinforced by the Imperium before the big battle in the East. However, the supposed “defenders” turned on their own side’s structures in what observers interpreted as an attempt to deny the Imperium their killmails, fearing that MOA’s failscade left them unable to defend their structures and knowing it was unlikely they could be saved.

Back in the galactic West, in short order the Imperium destroyed two of the North’s lowsec Keepstars, one owned by Shadow Cartel in Aeschee, and another in Kinakka owned by a Pandemic Legion affiliate. Both Keepstars died virtually undefended.

This began a wave of structure bashes that saw Northern forces refining their newfound tactic of using cyno jammers to inhibit Imperial Legacy capital ship movements, as Imperial Legacy forces learned to adapt and adjust their tactics in response. The result was a number of Northern citadels of various types lost, with little in the way of fanfare or resistance. 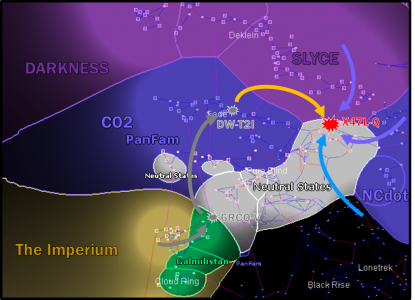 With their enemies reluctant to stand and fight, Imperial forces sought to provoke an engagement that would force their foes to defend. They settled, somewhat spontaneously, on NCdot’s staging Keepstar in X47L-Q. On July 31 an NCdot fleet formed up for a structure bash, and Imperium forces formed up in response. Instead of pursuing the NCdot forces, however, they joined with a small titan fleet to attack NCdot staging instead. NCdot formed a supercap response fleet, but stood down when the Imperium dropped another 50 supercarriers, backed up by other capital ships.

The X47 Keepstar was put into reinforcement, sparking one of Eve’s famous engagements that breaks out of the game and into the broader industry press. PC Gamer called it “the biggest battle in EVE Online’s entire history” (if not in terms of raw numbers, then at least in terms of titan deployments and kill-counts). Rock Paper Shotgun termed it “Eve’s most destructive battle in four years.”

While it took place in the West, preparations for this massive battle had striking ramifications for the war’s Eastern front as well. Pandemic Legion and NCdot redeployed capital fleets to the West to defend the Keepstar, leaving a void and forcing their Western allies to adjust. Observers viewed this consolidation as the end of significant Northern offensive operations in the galactic East.

After its initial reinforcement, the bulk of the X47 Keepstar fight was really two massive battles in one. First came the Keepstar’s armor timer. A brutal, ten-hour engagement dwarfing even the UALX Keepstar fight saw more than 600 titans deployed by the two sides, and almost 60 of them destroyed, including an Imperium Molok, the first ever downed in-game. The battle was complicated by a DDOS attack against the server as fleets were forming up, by the waves of disconnects typical of any such large-scale battle, and by the fact that the sheer number of kills overwhelmed zkillboard and made it difficult to determine the true scale of the battle until days later.

As the Keepstar was put into its final timer, it appeared that in terms of raw numbers the North had the upper hand. However, both sides stayed on the field and continued to whittle away at one another’s supercapital fleets. As more and more titans fell, KillahBee, commander of both the NCdot forces and the entire Northern defense fleet, ordered his expensive faction titans docked so that no more of them could be destroyed.

The loss of the North’s most potent weapons, as well as the Imperium’s overwhelming superiority in capital ships, meant that by the end of the battle the titan kill-count had evened out and the attackers ended up with a win overall, along with achieving their objective against the Keepstar.

That set both sides up for the fight over the Keepstar’s final timer a week later. But in the run-up to the final timer battle, NCdot leadership was already admitting that it was all but mathematically impossible for them to defend their staging grounds. Before the final battle the North evacuated much of their resources to the DARKNESS staging Keepstar in DO6H-Q and declared that their ultimate goal in forming up for the battle was not to save the citadel, but merely to exact as much damage from the Imperium as possible before it fell. In the end, they failed to do either.

In preparation for the final timer, the Imperium anchored a Fortizar near the NCdot Keepstar to provide an on-grid staging point, and both sides formed up to fight. NCdot called on their allies in Pandemic Legion to bring up supercaps for the battle, and Imperium forces made the same request of their allies in TEST.

A mix of strategic decisions, server performance, and luck meant that Imperial Legacy’s plans succeeded spectacularly, while those of the North did not. With more than 700 titans on-grid this time, another DDOS attack hit the server in the midst of the battle, throwing things into chaos and causing a wave of disconnects on both sides. Going against the oft-repeated Eve mantra never to “dual-tank,” Imperium titans sported an unusual dual-fit with shield and armor tank, which ultimately worked quite well for them. Meanwhile, an attempted HIC bomb by the North designed to try to get Imperium titans on-grid without the support of their fleet auxiliaries failed miserably, resulting in what GOTG FC Sort Dragon described as “a massive HIC feed.” There was also some question as to whether the PL titans ended up out of position on undock, possibly reducing their effectiveness against the Imperial Legacy supers.

As a result of these and other factors, things quickly turned into a rout for the defenders. The Keepstar died, along with around 20 Northern titans to only one lost by the Imperial Legacy.

The seminal engagement of the war up to this point was over, but its after-effects would continue to roil the entire galaxy in the weeks to come.