Good evening, and welcome to our liveblog of the final timer for the NC. staging Keepstar in X46L-Q. You may have seen the armor timer on July 31.  I will be covering the events until late EUTZ, so if I make any mistakes or you think I have missed something important, poke me on Discord at Rhivre#6282.

The timer is due out at 1837 UTC, and so far, both sides have begun moving their titans, supers and FAX into position ready for the off.  Goonswarm have anchored a Fortizar 1500km off the Keepstar, so they have somewhere to launch replacements from and to tether up.

The first kill for the system has come in, with a Thanatos from SLYCE dying to an Imperium Cerberus fleet. One of the pilots Rangorf Desanti got his first kill after being set up with a FYF last night and flying himself up to staging today!

You can follow the action live with commentary from Matterall, Carneros, Paramemetic, Artimus Albosa and others over on INN Twitch, and I will endeavour to keep you updated on goings on in system, as well as any tidi related shenanigans.

1815: 22 minutes until timer.  Panfam, Darkness and CO2 have Aeons in system. System has around 3310 at the last count. Adashboard local view from about 10 minutes ago is here. PL have just jumped in, and Imperium titans have just jumped in. NC have titans undocked and about to Boson a subcap fleet. 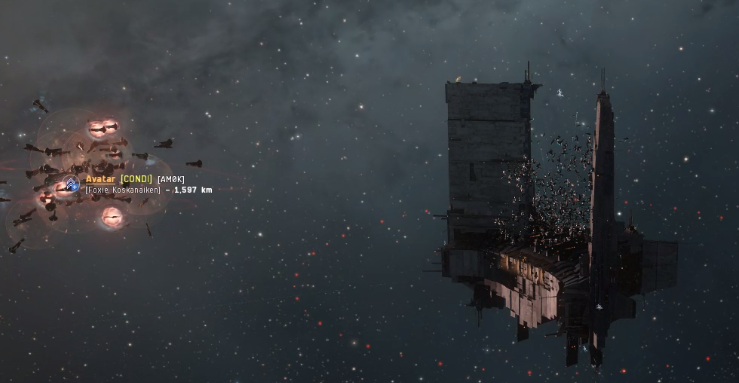 1819: Leviathan from NC. down according to reports, waiting for zkill to update to get you the link. Meanwhile a Ragnarok has managed to escape by warping away from Imperium. NC have bubbled the Imperium fortizar.

1825 Many of the HICs that bubbled the fortizar are now dead. Local is rising as the defenders bring titans in. 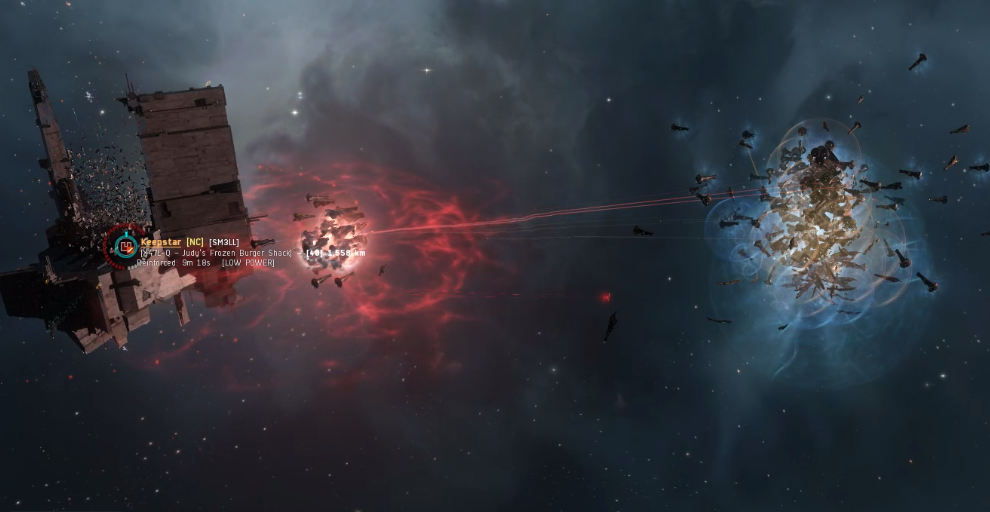 1829: a lone Goonswarm Leviathan is away from the rest of the fleet, so the score may move to 1:1 shortly. 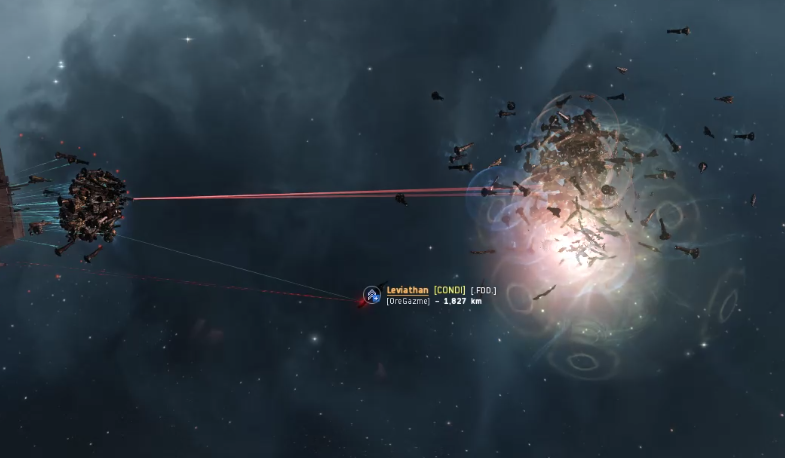 1835: 2 minutes to go, tidi is at 10%, and reports of server weird behaviour are happening as expected. It is reported that 140 HICs have died. These were bubbling the Goon fortizar.

1837: The Keepstar is now attackable. Local has peaked at just over 4000. Disconnects are reported.

1839: The timer is paused at 28m 7s. Mass disconnects are happening. Local has 2500.  Meanwhile, Imperium member and Twitch club streamer Mind1 has remixed Killah Bees words about the Keepstar.

1842: Imperium are doomsdaying titans that are on the Keepstar if they bounce out of tether. 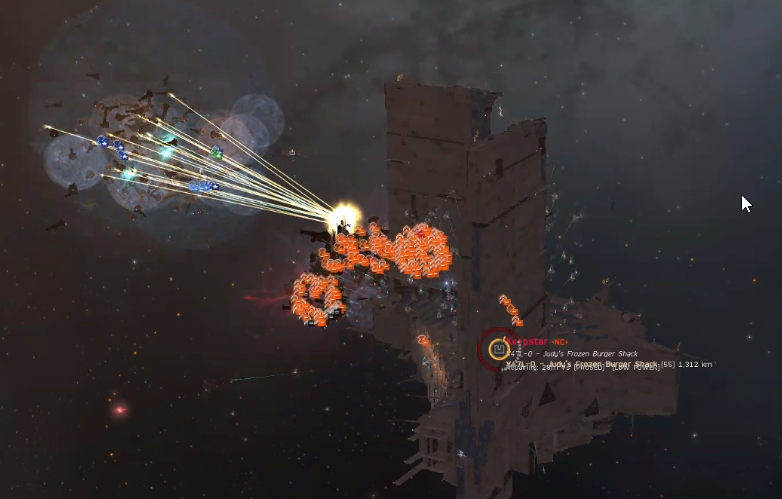 1844: Reports of an Erebus from NC going down.  We have also got the Leviathan kill from earlier finally showing up on Zkill.

1848: CCP are reporting 4808 in local. People in system are reporting around 4300. It has been a common occurrence in the past months for the numbers people see in local to be unreliable.

1853: NC Erebus loss has now popped up on Zkill so it is officially 2 NC losses to 0 Imperium/Legacy losses.  However, there are severe connection issues reported from both sides.

1901: Imperium are continuing to attack the titans on the keepstar. NC are returning fire.  There are mass disconnects happening, but the timer is being paused by two titans. The score is apparently 3-1 to Imperium, with a titan that survived B-R dying from the Imperium. [Editor’s note: an incorrect killmail was linked from August 1st and removed]

1905: It seems there are over 700 titans on field in total from various dscan.me and adashboards floating around.  The servers continue to struggle, with some calls for things like warps waiting for over 2 minutes.

1913: Reports are coming in that the Imperium titan that was suspected to have died has actually survived. TEST seem to have saved the Imperium titan with timely fax reps. Progod is one of the few streamers logged in.  He is flying a titan and drinking some Canadian beer.

1917: Ranger Regiment have lost a titan 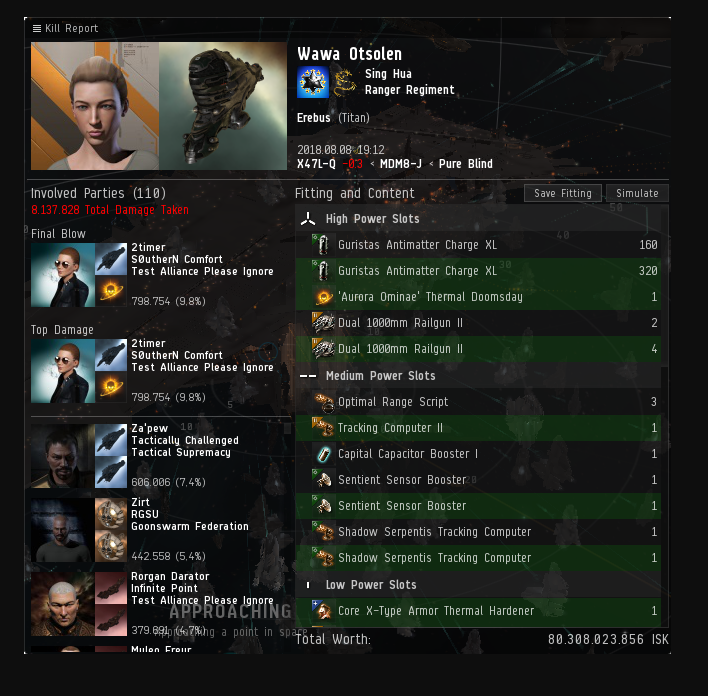 1922: For people who can log in, there are a lot of outstanding calls for bounties and killrights, this is not something that happened in the last fight. Last fight it was calls for sovereignty related items.

1925: Ongoing issues affecting all sides with connection. People are waiting up to 20 minutes to reconnect. I seem to have jinxed PGL, as he has just DC’d.

1930: Local is around 5000. Score seems to be 6-1 to Imperium. Progod has it at 7-1. Zkill is so far behind that it is at the armor timer or something, and staying connected is more RNG than rolling upgrades on abyssal mods. Keepstar is at 80%. 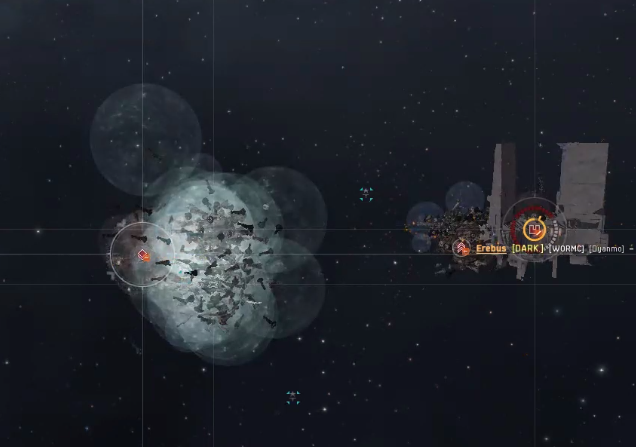 1941; Keepstar is at between 72% and 77% depending on which client you look at. Darkness have lost a titan. Progod is feeling the pain of broadcasting while FCing.  Matterall is getting targeted and would like Imperium pilots to not shoot at him. Boat has joined TIS comms to confirm that 7 titans are down from the Northern forces

1945: Progod has given up trying to log in and gone to make a steak. Sort Dragon has made it to safety and has tethered.

1948: DBRB has come in to say an 8th Northern titan has died, an Erebus from Chaos Theory.

1952: It seems that Dead Coalition (previously known as GOTG) are deagressing their supers.  Matterall has reconnected, he is not exploded, he just has a flesh wound. Progod has reconnected, and is not dead. Keepstar is at 65% 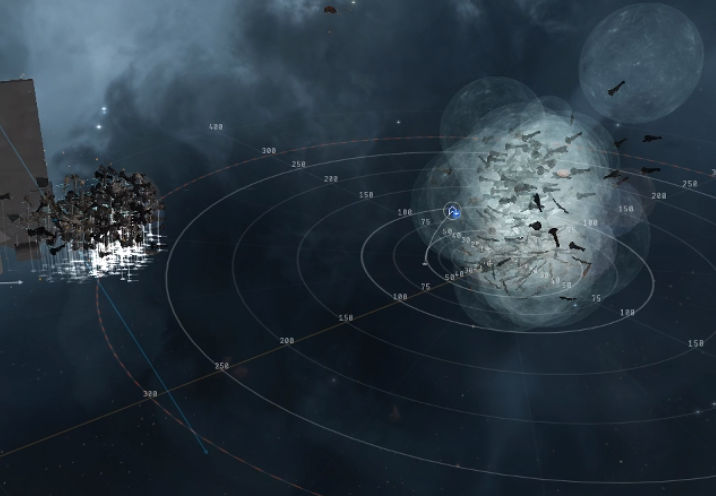 2000: The Darkness titan has shown up on Zkill. At the moment, despite the score being 8-1, Zkill is only showing 4 total

2004: There are rumours going round that the Northern forces are deagressing and docking or jumping out. This is not confirmed yet.

2010: There are a number of Northern titans tackled, so the score will likely jump up now. The Keepstar is around 59%. Boat is reporting that there were a number of titans rused into docking up by being called incorrectly as targets by Imperium early in the fight. When they undocked, they were out the wrong side of the Keepstar for the fight.

2015: An Avatar has just died, so 9-1 official score, but there are two names being mentioned, so might be 10-1. NC are taking what is being called evasive action. 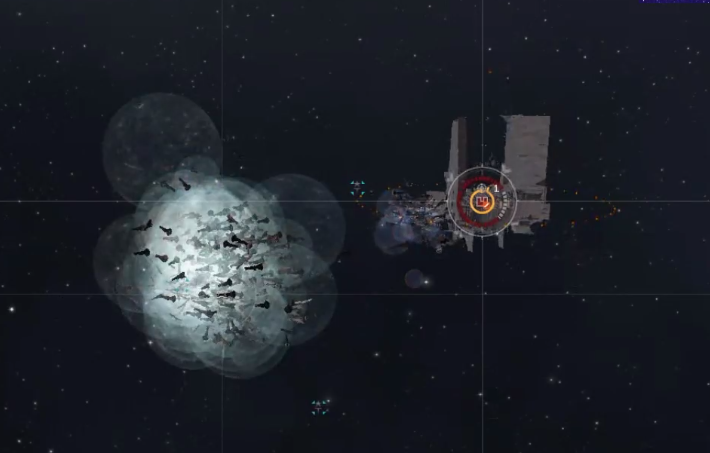 2023: System continues to struggle with the load. Titans are dying still, 14 losses from the North, with a 15th under attack.

2029: CCP Falcon is reporting in Twitch that there is a DDOS attack on TQ at present.

2033: 16 down, with another 3 going soon. Keepstar is approaching 50%. Progod is getting expressive with his Bob Ross scoreboard, but is running out of colours. I think he has given up rewriting numbers, possibly to avoid RSI. He is only keeping score on the Northern titans.

2038: Matterall has reported his Erebus is safe.

2045: Despite the DDOS, the server seems to be holding.

2046: Progod is having difficulty locating NC titans. Anyone who has seen them, let him know.

2050: Titan kills are starting to arrive on Zkill (More accurately, I remembered to check Zkill twitter). Incoming spam in reverse order that they are on the feed:
Caladrius Alliance Avatar

2103: Carneros is slowboating towards the fight hoping to shoot things.

2104: While some titans have docked up in the Keepstar, and should theoretically be able to jump out before it goes down, the connectivity issues mean that they may not get back in time for the explosion. If they do not, their titans will end up in asset safety.

2108: The Keepstar is still being shot at. If this level of tidi keeps up, it will take 2 hours or so before it explodes.

2111: CCP Falcon is now on INN Twitch explaining the DDOS. TQ got hit by 13GB of traffic just after 2010 UTC. They have been recovering the services since then. It crippled the login servers and other services for about 20 minutes until they could get it under control. There are other issues which they are looking into, regarding pilots not having skills after disconnect. This particular issue seems to have affected four ships, and would explain rumours of some titans being unable to jump out.

2115: CCP Falcon has said that the server was handling things quite well before the DDOS.

2118: 3588 people are still in system. Progod is deciding whether to shoot at Hedliner or the Keepstar.

2130: Dreads and FAXes are fighting in safespots at the moment. 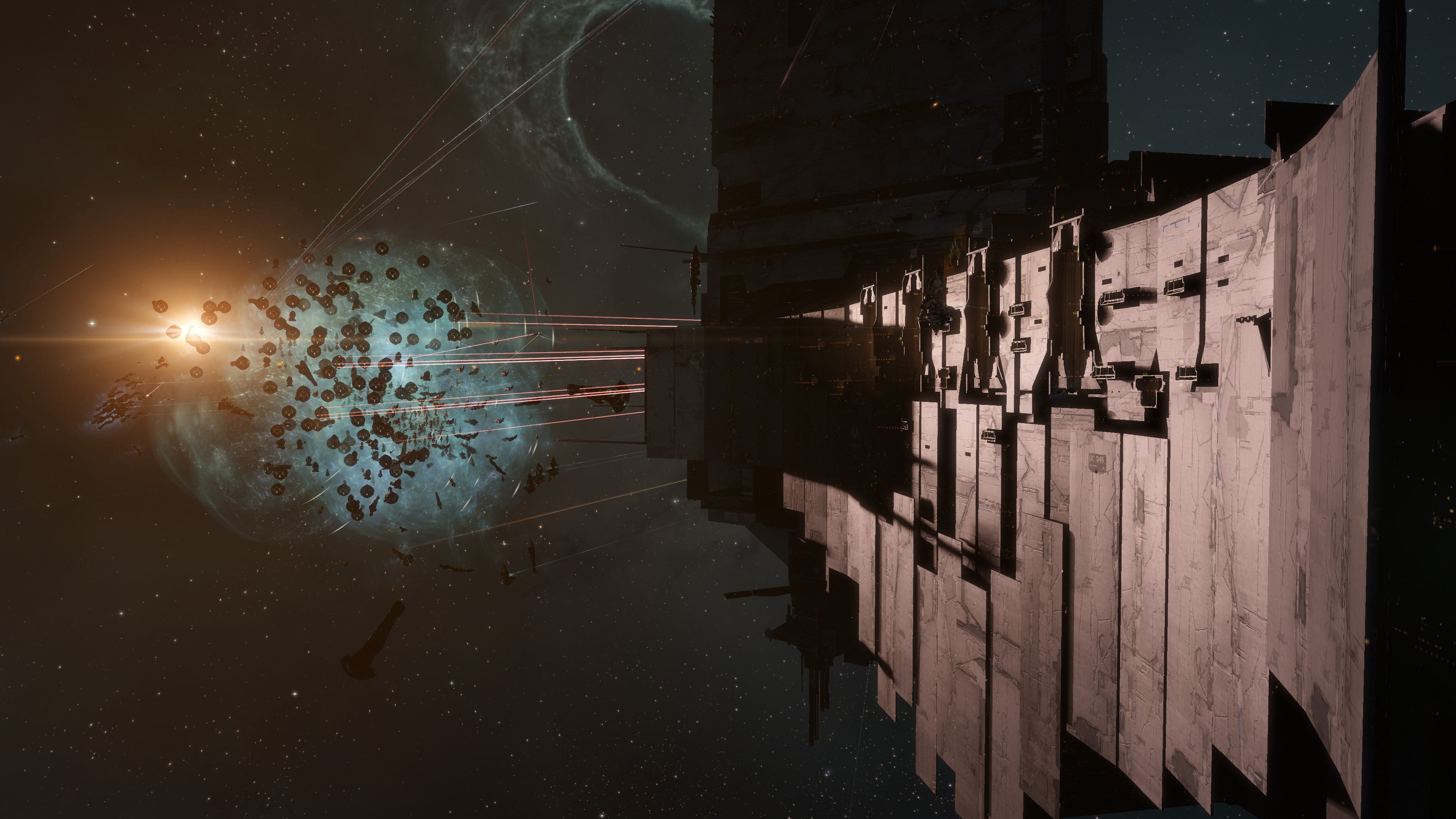 2141: Progod appears to be cooking something off camera. I have spent 10 minutes wondering what Boat was doing with his mic. It turns out it is PGL frying his steak. The Keepstar is at still going down. Imperium are moving their ships in range of the Keepstar.

2144: Progod is washing up I think. The Keepstar is still being shot at. Progod left his guns cycling, and is about to run out of ammo.

2150: Progod is back. He thinks his mic was muted. He will not show us the steak and is instead talking about a keepstar or something. 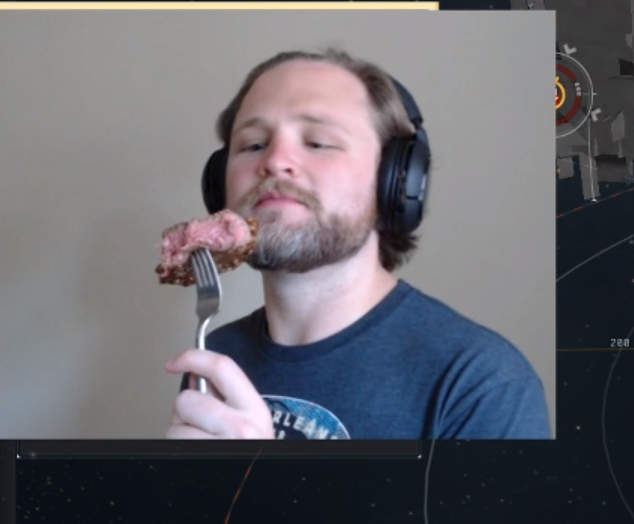 2153: The steak is grassfed cow from a butcher near his apartment. Apparently butter is the way to cook steaks. Progod has also noticed he is out of ammo, but the steak is more important to deal with first. The keepstar will still be there.

2200: Another kill has come through: Darkness Avatar

2213: Shingly has sent us these pictures from the fight. 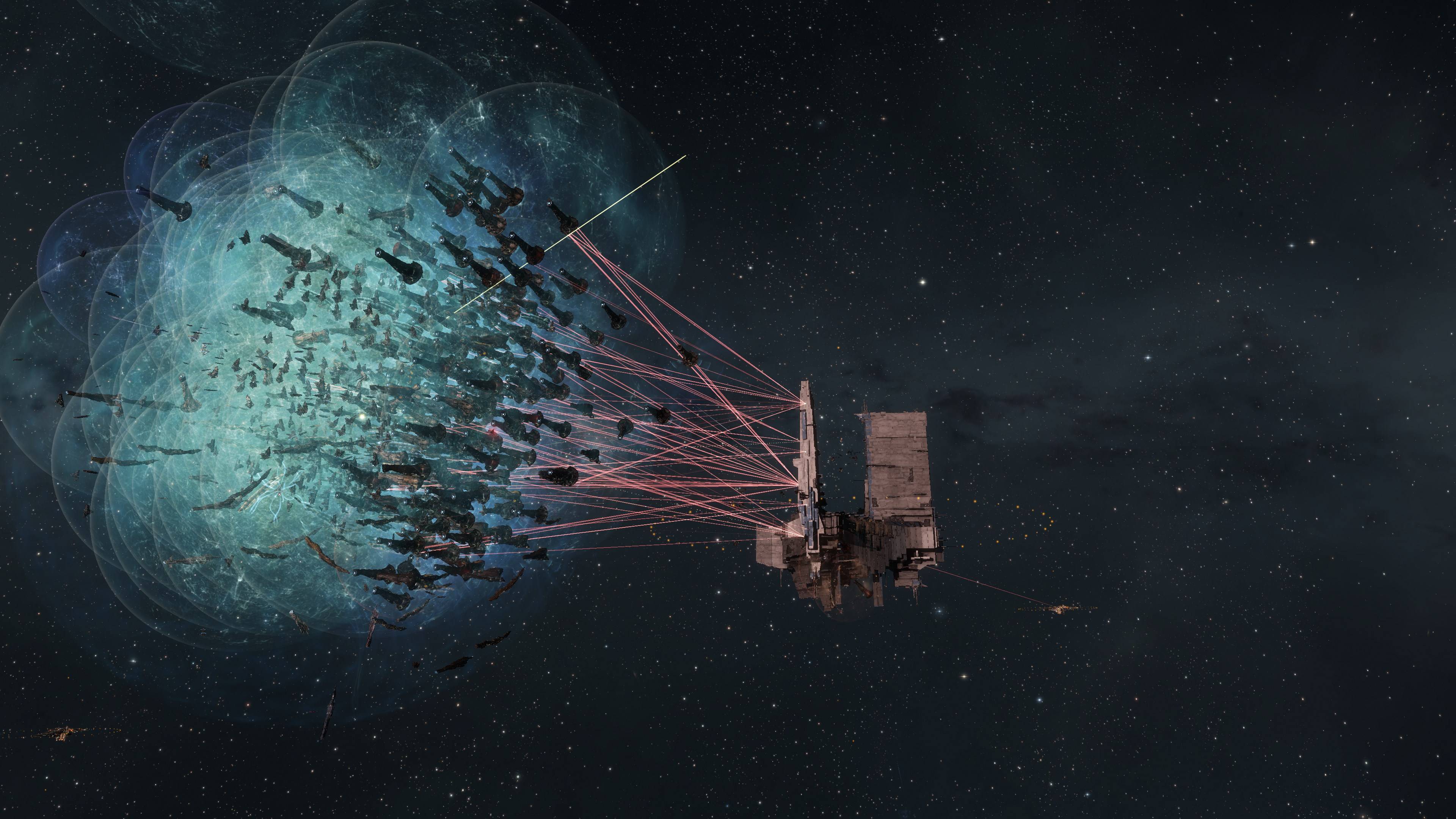 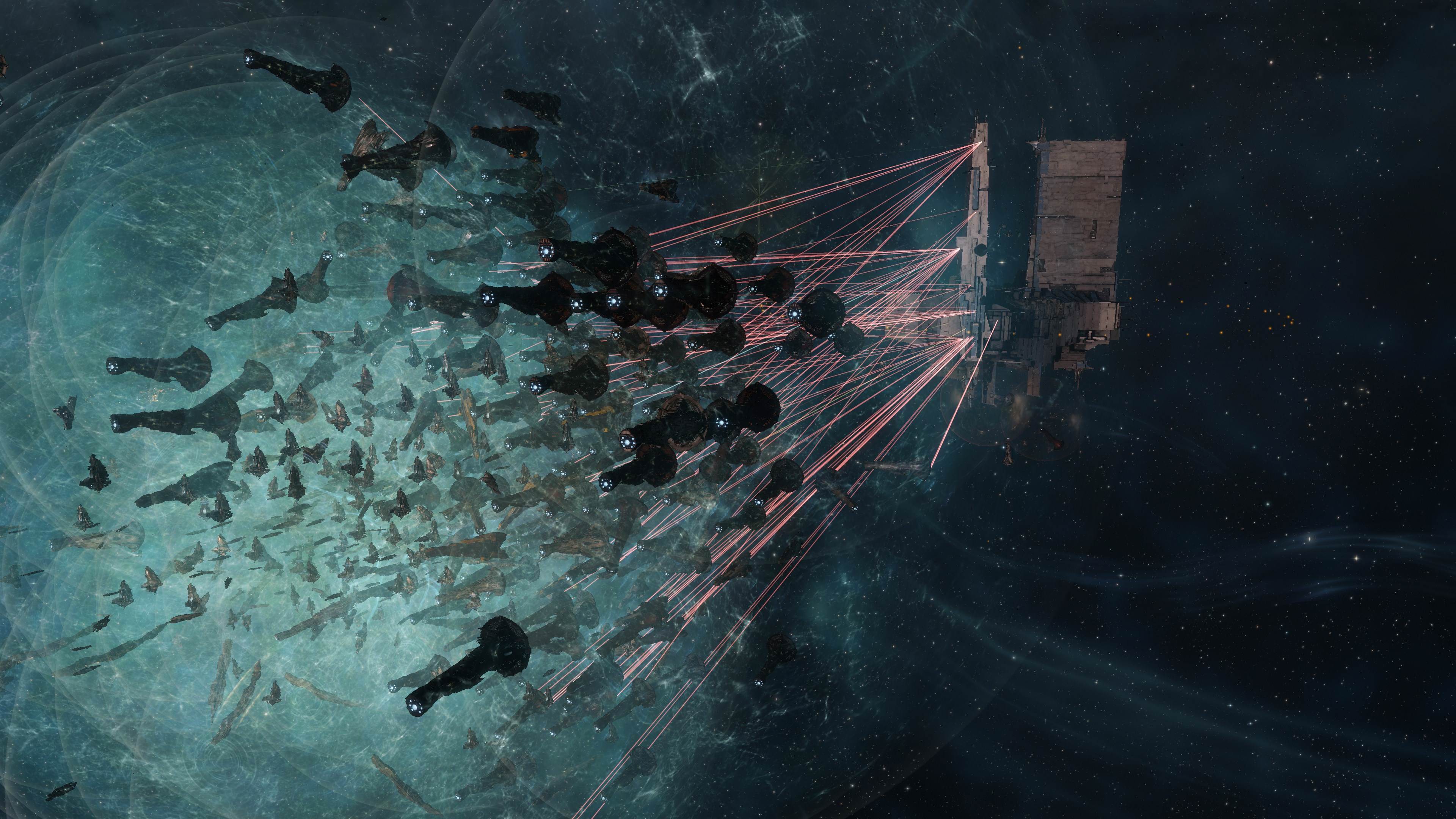 While Rose Knightley has taken this amazing shot 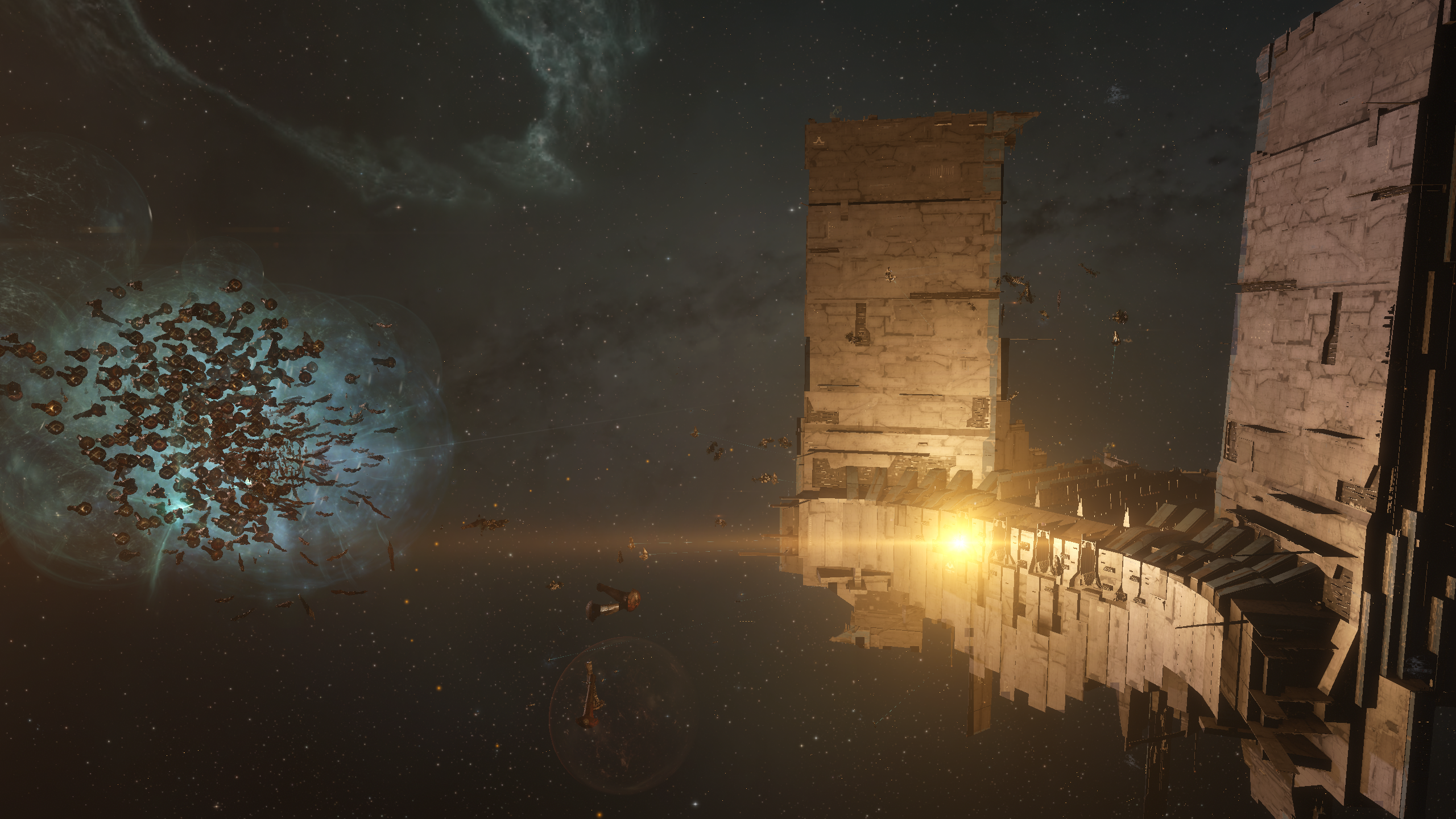 2221: CCP have updated info about the DDOS

The DDoS attack against Tranquility has now subsided and we are currently monitoring the situation.

Services should now start to return to normal.#tweetfleet

2225: Tidi is improving, currently at around 17%. Not long to go on the keepstar now 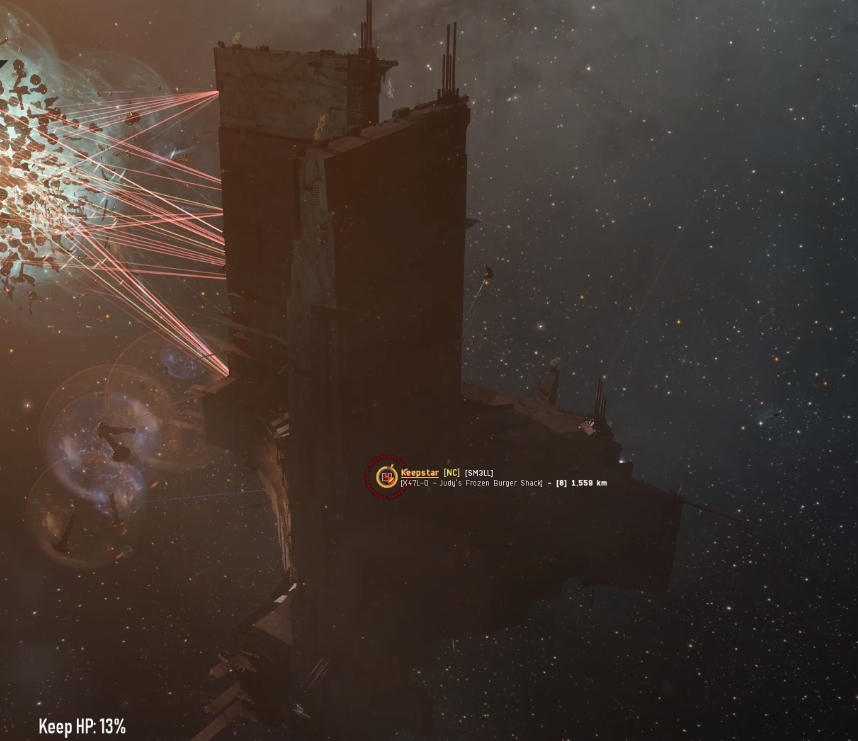 2231: Kills are trickling through from the beginning of the fight now, here is a Darkness Erebus from 1853.

2235: Another one from Rose Knightley, showing the view through the attacker’s titans to the Keepstar (Which is at 6% now…not long to go!) 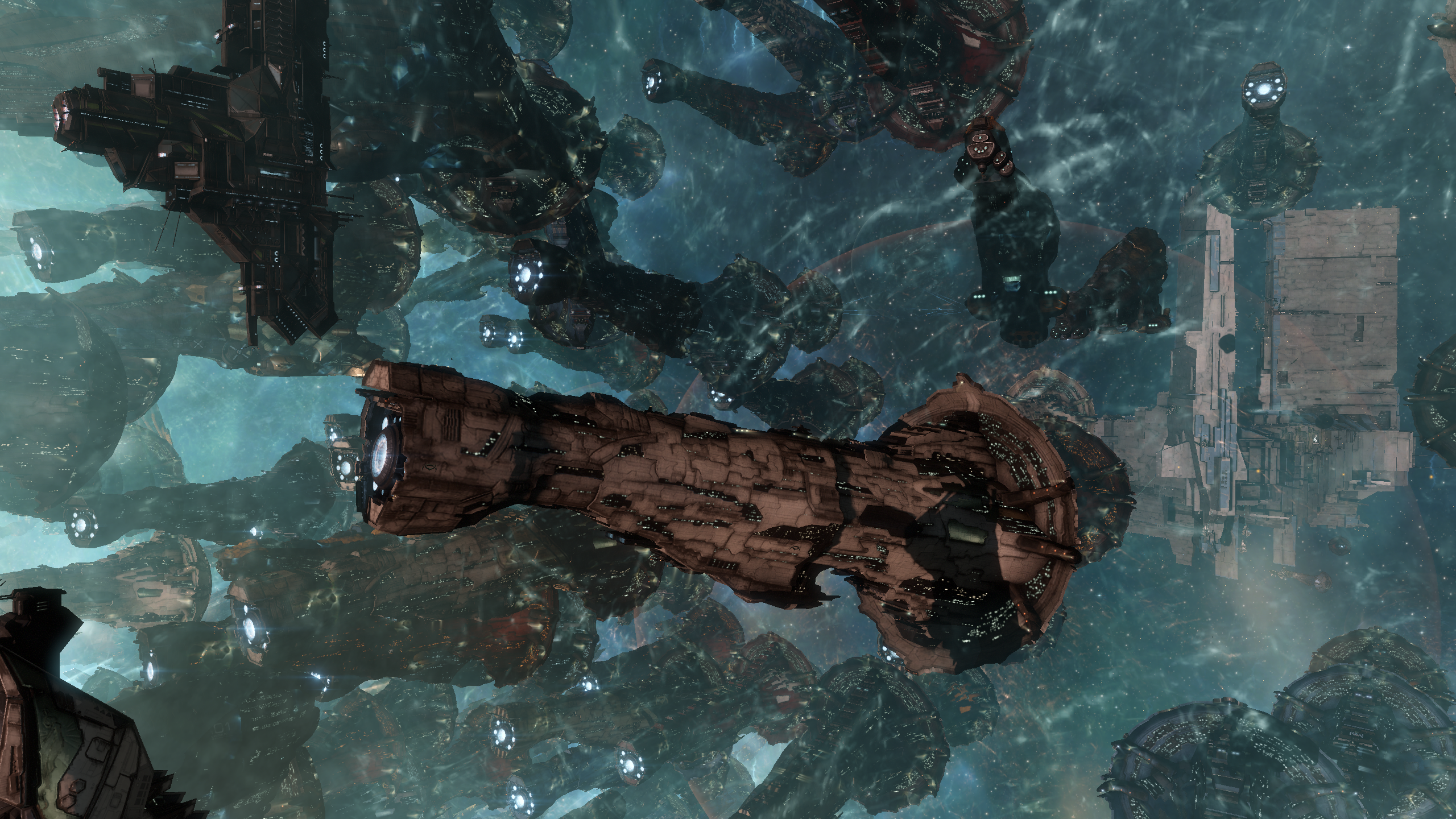 2238: More delayed killmails (I will collate all these, probably): Northern Coalition Erebus from 2033 along with another amazing shot from Rose, who is making it look like she is photographing underwater lifeforms 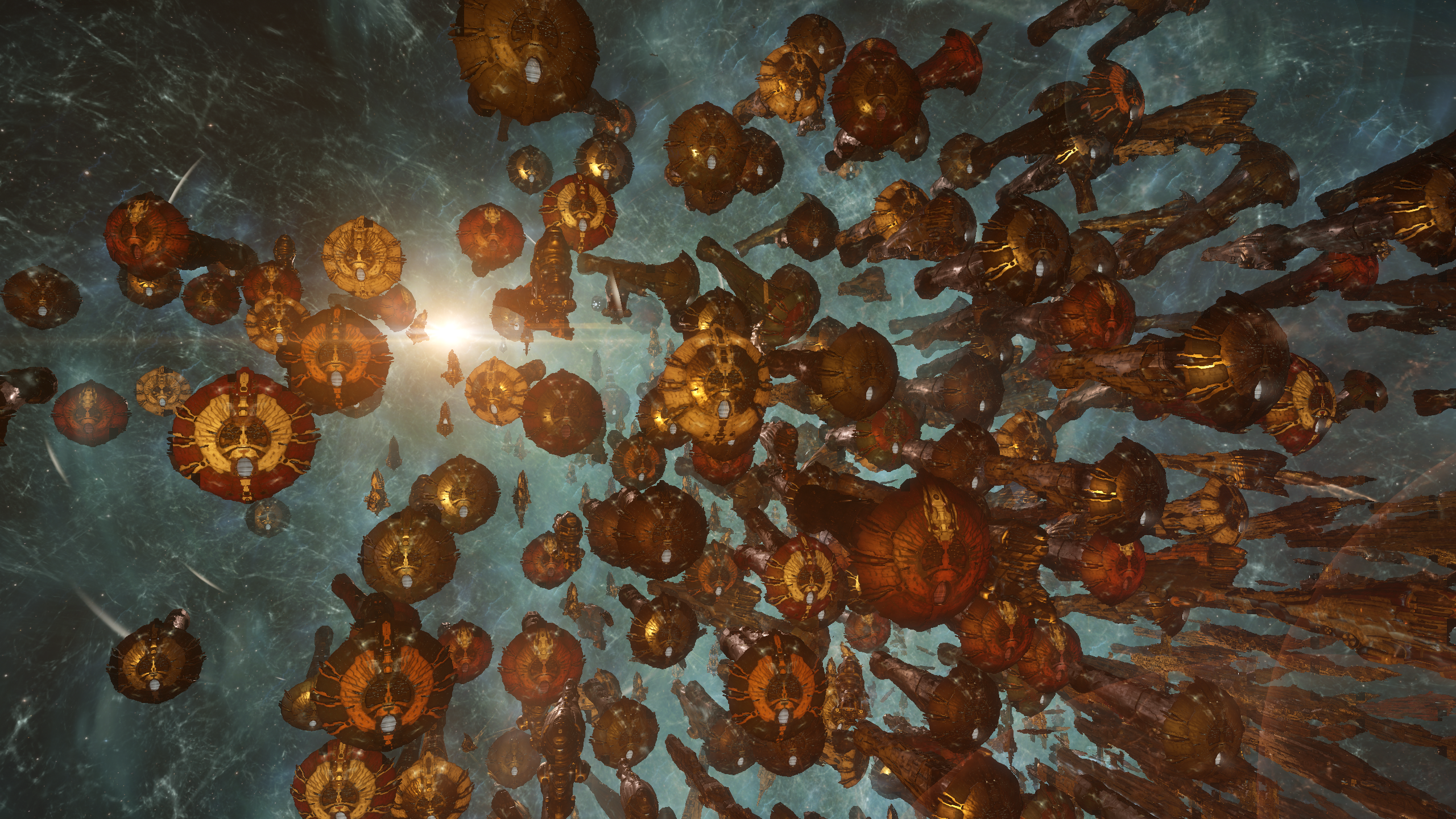 2244: Keepstar down, waiting for the explosion 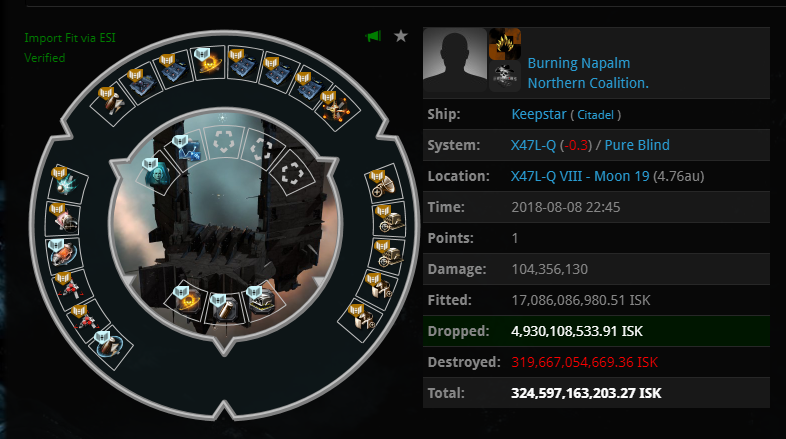 2304: Rose Knightley has some final shots of the explosion. The underwater feel of these is amazing. Eve, after all, is submarine physics. 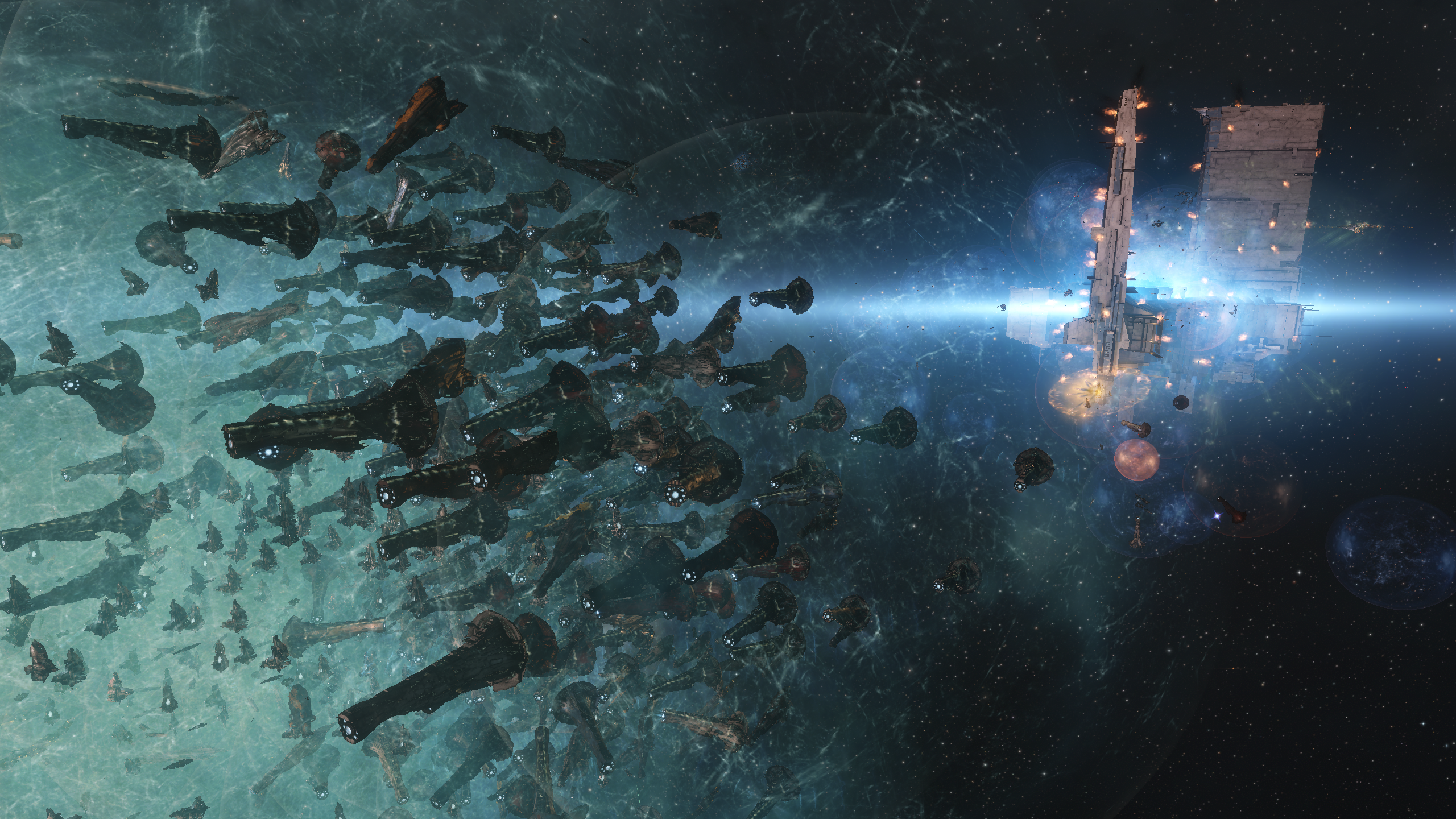 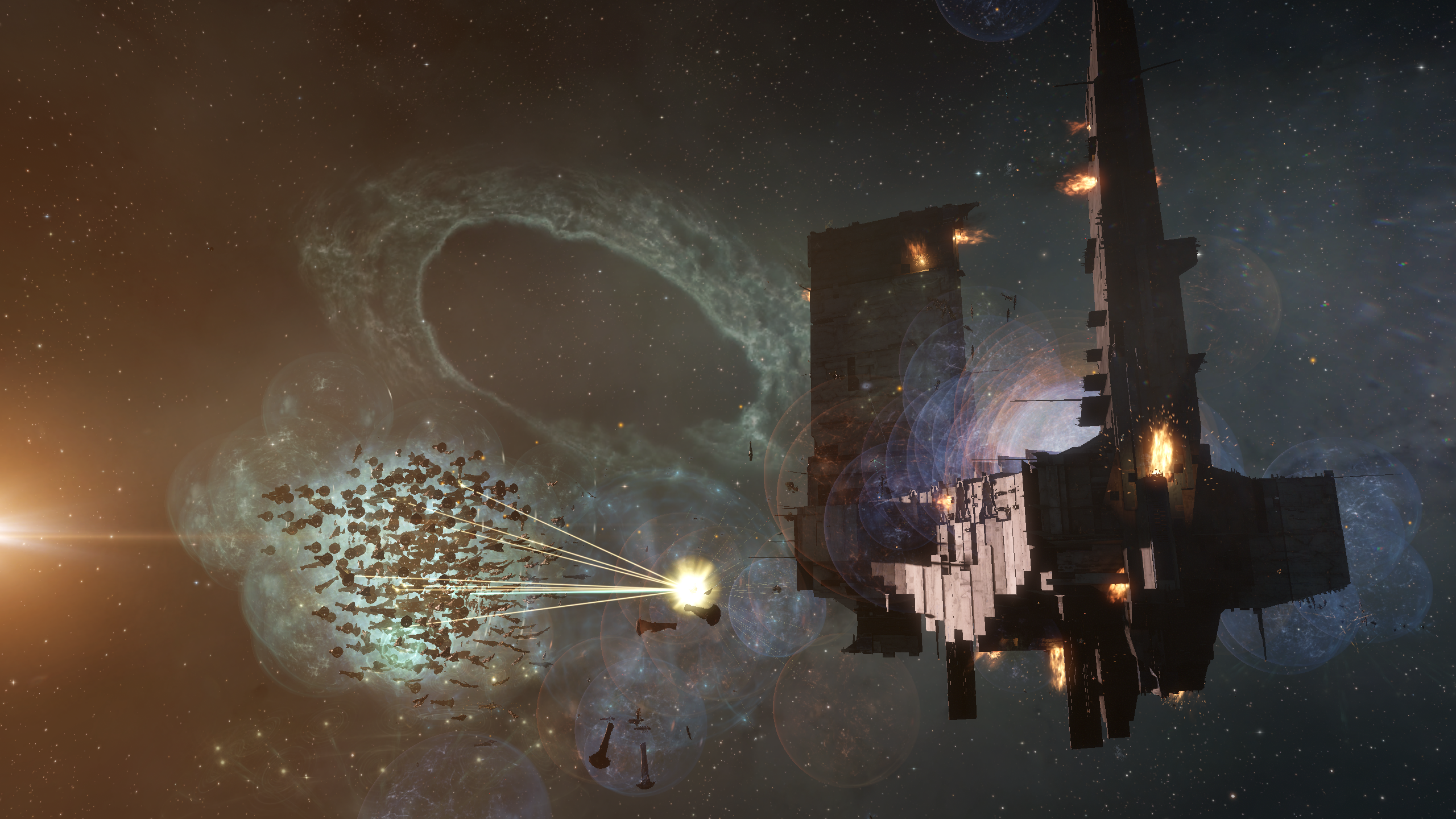 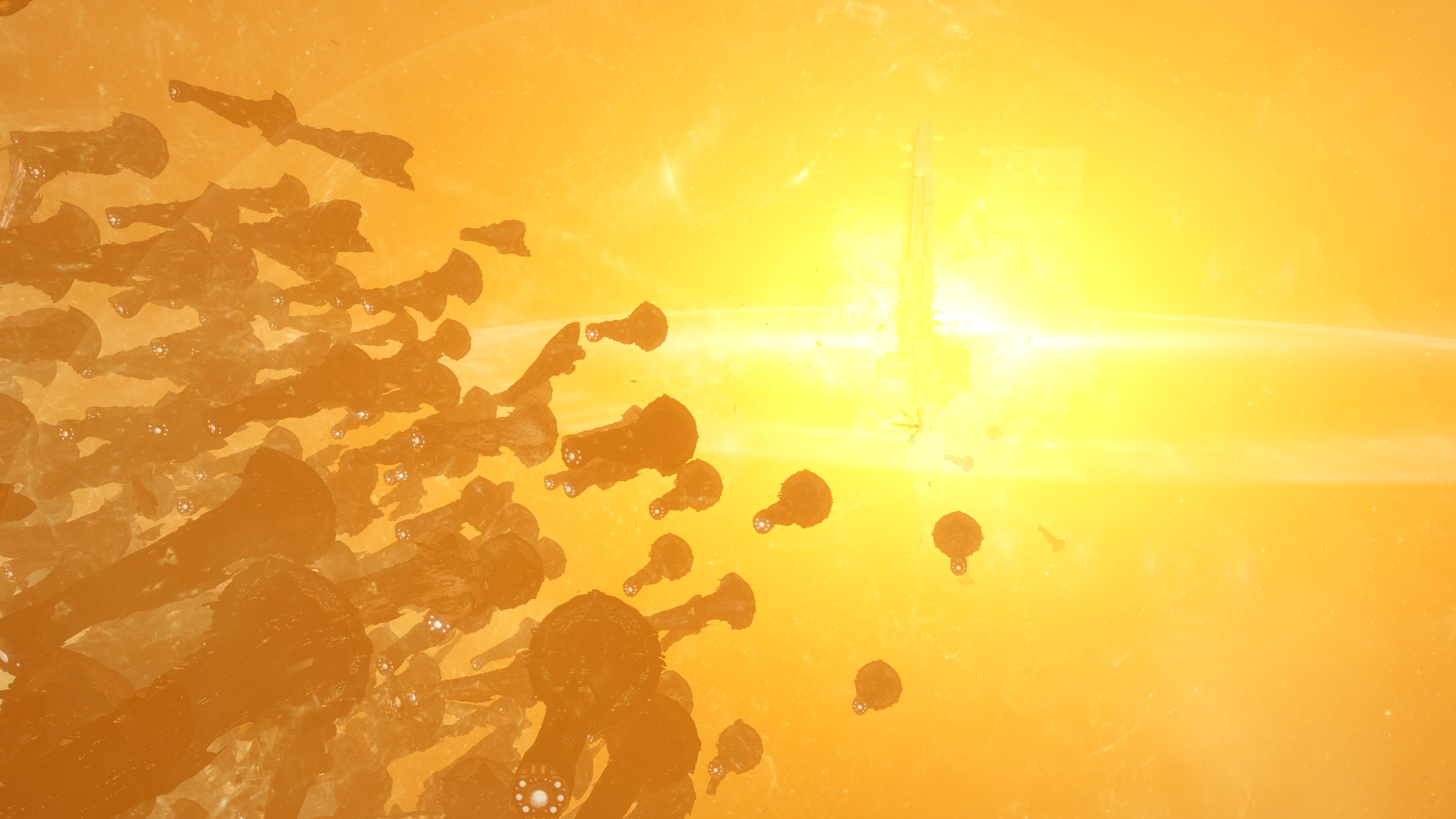 2310: Before we close out the live blog, one final notable kill from the ships that were ejected:Northern Coalition Archon. Normally an Archon would not be notable, but, this particular one seems to be carrying the kitchen sink along with everything else the owner could find in his hangars.

I am sure many articles will be written on the goings-on tonight, there are already reddit threads, tweets and excitable players in Twitch chats. But for now, thanks for hanging around, and see you at the next big fight.