The War in the North: Part 3 – Breakout on Two Fronts

For nearly a month following the massive battle for X47L, things got comparatively quieter. The war was still in full swing, but there were no massive set-piece battles, as both sides jockeyed for position in smaller ways. Alliance Tournament XVI, which some have called “The Olympic Games of Eve” served as a distraction as well, running from late July while the outcome of X47L was still in doubt, through most of August.

In the meantime, sensing the way things were turning, CO2 largely abandoned their defense of Fade, as the Imperial Legacy destroyed multiple undefended structures.

From there, Imperial Legacy forces extended their reach deep into enemy territory, stealing a faction Fortizar in Pure Blind, negotiating a diplomatic agreement that eliminated the lowsec Keepstars in Aunen and Maila as a threat to the front, and engineering a massive dread bomb that took out a Pandemic Horde Rorqual fleet in Geminate.

Skirmishes between the Imperial Legacy and the Northern forces continued, with wins and losses on both sides.

While the Imperium’s famous collection of Squads and Special Interest Groups kept things interesting in the North, the Imperium rank and file temporarily returned to focusing on what they do best – churning out massive amounts of industrial production. But the apparent calm was deceptive, and very, very temporary. 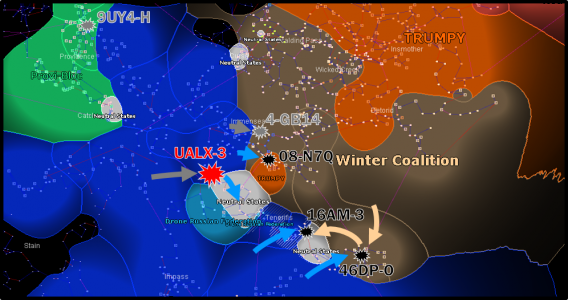 The strain of the protracted war in the East – which long preceded the Imperial Legacy’s galaxy-wide war against the North – proved too much for some. The Legacy-aligned Yulai Federation sought to leave the Legacy Coalition over the strain of two back-to-back wars. Similarly, ElitistOps and SniggWaffe sought an exit from Pandemic Legion. Meanwhile, the PanFam-aligned Holy League (formerly the Holy Rental Empire) withdrew from the front and went home.

While things went comparatively quiet in the West, the Eastern front turned into a trench warfare-style entosis battle for Tenerifis. With the Northern superpowers’ attention turned elsewhere, Legacy Coalition’s advance was resisted mainly by the local Tenerifis Coalition along with their longstanding rivals in Winter Coalition. Legacy-aligned XiX, Razor Alliance, and Predditors captured a number of systems from Blades of Grass and Literally Triggered of the Tenerifis Coalition.

The Eastern stalemate appeared to break open a bit as the Winter Coalition suffered several setbacks against Legacy Coalition. Legacy espionage operations undermined Global Regiment Alliance, formerly of the Winter Coalition, flipping several structures including a staging Fortizar to Legacy. Fraternity attempted to anchor a Keepstar in 46DP-0, but failed to take into account the Labor Day holiday in the United States, which meant the Keepstar’s defenders were vastly outnumbered by USTZ Imperial Legacy forces, and the Keepstar quickly died. This turn of events forced the Winter Coalition forces back into Fraternity’s 16AM-3 Keepstar, which was then reinforced and ultimately destroyed on 18 September. Meanwhile, Legacy anchored their own Keepstar behind Winter Coalition lines in 08-N7Q. 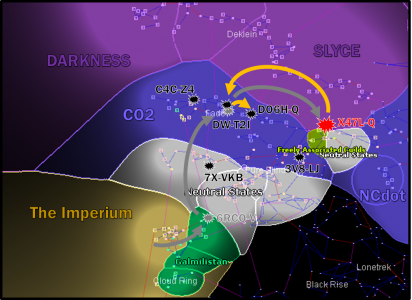 As September came, along with it came the time for the Imperium to settle old scores against CO2, their former allies who had switched sides to fight against them in the previous war. Their earlier assault on the CO2 staging citadel in DW-T2I had ground to a halt, but the Imperium had since learned how to counter their enemy’s cyno jamming, and had spent the previous month methodically taking out the CO2 structures that supported that tactic.

This culminated when, on 19 August, the Imperium reinforced the DW-T2I iHub, attacking the system for the second time in the war. On September 6, Imperial Legacy forces destroyed the iHub, leaving the system’s staging Keepstar – and others nearby – defenseless.

As the Keepstar’s final timer arrived, the question on many minds was whether CO2 would defend their staging ground. The answer, it turned out, was “no.” NCdot appeared to be moving capital ships in a position to mount a defense, but ultimately the Northern forces decided that if CO2 would not form in its own defense, their allies were not going to do the job for them.

CO2 had abandoned Fade. The DW-T2I Keepstar – the one bright spot in the North’s defense of its Western front – finally fell, and with it the last significant resistance to the Imperium’s advance in Fade went up in a massive ball of flame.

The demise of CO2 staging meant that the North’s center of gravity for resisting the Imperium now resided in DO6H-Q, a former Darkness staging Keepstar handed over to NCdot after their evacuation from X47L-Q that now served as shared staging for the Northern forces to form up against the Imperium. In the second week of September, Imperial Legacy forces pounced, reinforcing not just the DO6H-Q staging Keepstar, but three other Northern Keepstars along with it. Over the weekend, all four were put into their final timers – three of them within a single, three-hour period – with minimal resistance that saw only subcap fleets form for the North.

This set up another key engagement over four Keepstar final timers for Wednesday, September 19. Complicating this midweek battle was the fact that the North set their timers for AUTZ, a time when their forces are typically stronger than the USTZ-centric Imperium.

First came the 7X-VKB Keepstar at 0900 EVE time on the 19th. The target was destroyed in 90 minutes with little resistance. Next was the last remaining hub of Northern resistance in the region, the DO6H-Q staging Keepstar. Resistance was light, but present, as a Northern subcapital fleet fell to the Imperium’s attackers in the process of destroying the Keepstar.

Next came the 3V8-LJ Keepstar, with token resistance costing CO2 a Stiletto along with the citadel. Finally, Imperium subcaps took out the C4C-Z4 Keepstar and attacked several other structures in the vicinity including a Sotiyo, seven Fortizars, 12 Athanors, a Raitaru, and a faction Fortizar. After 11 hours and 30 minutes, Imperium forces returned to staging in 6RCQ, leaving four Keepstar-sized holes in the systems behind them.

The stress of the Imperium’s invasion has sent cracks through an already fragile Northern command structure. In addition to the departure of the Holy League and Pandemic Legion’s shedding member coalitions, Pandemic Horde’s Partisans SIG leader AlphastarPilot openly lamented the lack of unified leadership in a fireside chat where his SIG members mused whether the battle for the North was already lost.

Then, in a reaction to CO2’s decision to abandon Fade, Sort Dragon invited GOTG members to get in on CO2 Keepstar killmails, and locked CO2 out of Darkness structures, leading some to wonder if he was attempting to appease the Southern attackers or setting his coalition up to switch sides. Meanwhile, according to Alphastar and others, Pandemic Horde is focused on reinforcing their stronghold in Geminate, while Pandemic Legion seems to be disintegrating, and on September 16 lost in excess of 5 trillion ISK in unique Alliance Tournament ships to a theft from a long-time AT player with a seven-year-old grudge – New Eden’s most expensive heist ever by a wide margin.

Ultimately, the strain proved too much for the North, and they agreed to the Imperium’s terms for a ceasefire, negotiated by Goonswarm Financial Director Aryth and GOTG/Dead Coalition’s Sort Dragon beginning at this year’s CSM summit, and concluding with a signed deal on September 16th. The deal entailed a one-month withdrawal by Imperium forces from Tribute, Vale of the Silent, and Geminate – to include all main fleet, SIGs and squads, and cloaky campers – and a six-month withdrawal from Deklein, Branch, Fade, Pure Blind, and Venal. In exchange, the cash-poor North agreed to pay the Imperium in faction Fortizars – 40 of them in all.

Announcing the deal here on INN, Aryth said, “One of the reasons I offered the deal was to see just how broke our enemies were.” The answer to that question necessitated payment not in cash, but in valuable faction Fortizars, which were a known quantity to the Imperium because, as Aryth said, “we built the outposts that were converted into them.”

“We could burn down Deklein,” he said, “or we could extract our wealth from Deklein.”

In a special podcast with Talking in Stations, Sort Dragon explained that with the North fracturing, his position in negotiating with the Imperium was, “give me a number for you guys to f*** off.”

The Imperium’s original offer was a ceasefire in exchange for 2.5 trillion ISK. “We don’t have that much ISK,” he said, explaining that GOTG intentionally keeps its value tied up in assets, rather than cash.

The Imperium’s initial offer, he said, also asked him to turn on his Northern allies. That, said Sort Dragon, “was not going to happen.”

Instead he agreed that his coalition would pay the Imperium’s required tribute – the 40 faction Fortizars – on behalf of the entire North. In exchange, while the rest of the North would be free from Imperium forces for a month, GOTG space would get a six-month reprieve.

Signed on the 16th, the deal went into effect on September 19th, with a full cessation of major hostilities on the 29th. Assuming there are no violations of the deal’s terms, the one-month proviso will expire on October 19th, with the remainder of the deal expiring on March 19th, 2019.

The Butcher’s Bill and the Way Ahead

In addition to the Faction Fortizars and numerous other structures, the final butcher’s bill for the Northern forces and their allies in the East included 10 Keepstars destroyed and two relocated away from the front:

What this means for the war’s Eastern front has yet to be determined. Legacy Coalition is still on the offensive, while the Imperium is headed home to Delve for the time being, so what happens next remains to be seen. This being Eve, one thing alone is certain: whether next week, a few weeks from now when the first segment of this ceasefire expires, or in six months when unrestricted warfare may well resume, there are still stories yet to be written, and history yet to be made.