Imperial forces were able to steal a rare faction Fortizar from Cascade Imminent (FAIL) earlier today, August 20, as the latter continued its attempts to withdraw from Fade. The Draccous Fortizar was stolen from El8-4Q system, deep in Northern controlled space.

INN reached out to Lededje Lupo of Goonswarm Offensive Logistics, who explained that earlier today GSOL had been placed on a standby. “We found out on very short notice that there were some unanchoring structures belonging to Cascade Imminent.”

Imperium scouts had noticed a cargo-fitted Rorqual jumping into the system, and speculated that the unanchoring timer would finish soon. Attempts to bridge a bomber fleet in to cover the unanchored structure after bubbling it were made, but FAIL had a Cormorant fleet on grid which killed the covert cyno ship.

Shortly after the FAIL Rorqual jumped into system, a cynosural field jammer was activated. “We also discovered that the system’s cyno jammer had been activated … when we tried to jump our cargo Rorqual into the system.” Lededje Lupo told INN.

“Through a bit of off-the-cuff scrambling to get around the obstacles, we managed to get the bomber fleet in the system and jump our cargo Rorqual next door.”  GSOL then gated their own Rorqual into the system and warped to the unanchored structure, managing to scoop it and fight their way free. 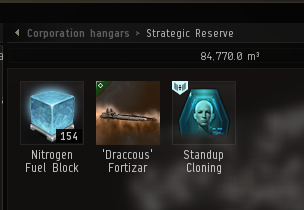 In addition to stealing the Draccous Fortizar, the other unanchoring structures in the system were reinforced, restarting their unanchor timer and delaying their withdrawal until next week. The area was protected by a small Cormorant fleet which was bombed off the field.

INN continues to monitor the activity in Pure Blind as more and more members of Northern alliances are withdrawing their structures and evacuating to safety.