YULAI – AUGUST 20: CCP opened up ‘GM Week‘ today with a bang, teleporting in ‘willing test subjects’ and setting them with a Suspect flag in front of a small horde of eager PvPers. The slaughter marks the beginning of a week-long series of events where CCP’s Game Masters and Customer Support teams have been let ‘off their leashes‘. This first event was kicked off by the Live Events Team, and CONCORD’s Brigadier General Odo Korachi:

[18:57:52] Odo Korachi > These tests will be used to assess the functionality of new Cynosural Projection technology that is currently under development by the CONCORD Assembly.

[18:58:55] Odo Korachi > We’ll need some willing test subjects, and as such we’ve selected from a list of wanted indviduals[sic] who are known to be in violation of the Yulai Convention, and are utilizing illegal Rogue Drone Automation Technology.

Shortly after that, ships began being teleported in and being set suspect. At this time, there is no official statement regarding the selection criteria, but many players in the system believe the ships being brought into Yulai are characters CCP has determined are botting. If so, it is unlikely that CCP will make any statement regarding this until well after the event ends, if at all.

As the event draws to a close, multiple capital ships, including at least four Hel-class supercarriers, have been destroyed. CCP streamed  the event live on their twitch channel.

Update: The system kills for the event are up on Zkill. 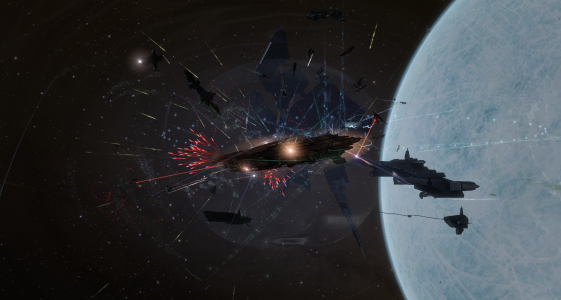 A Hel dies in Yulai under the watchful gaze of CONCORD.