Week four of World War Bee saw a fair amount of action, and some major strategic shifts. The ISK split in the major theaters continues to be roughly 60%-40% in favor of the attackers. In the two main theaters of conflict, the Imperium has lost 4.4 trillion ISK versus 2.8 for Legacy, PandaFam, and their allies. It appears that there have been 265 hostile actions related to this conflict, 239 of which have taken place after the severing of the Non-Invasion Pact.

Conversely, the New Eden-wide battle report shows a much more interesting picture as back-line actions are waged. This battle report shows losses of 5.3 trillion ISK by the Imperium since July 1, versus 5.8 trillion ISK by named opposing forces. In all, 107,557 ships have been lost so far, for an average of roughly 107 million ISK per ship. It also shows that the Imperium has fielded 54k capsuleers against nearly 140k capsuleers, an almost a 3:1 ratio.

Week four’s action included seven fights with losses exceeding 20 billion ISK on either side. In three fights, the Imperium successfully defended their strategic objective; in three fights, the attackers successfully assaulted their strategic objective (including the August 1 withdrawal operation in Y-2ANO by The Initiative [INIT] and The Bastion); in one fight, the strategic objectives were split and the ISK war was nearly even. The two major theaters continue to be the North (Fountain and its border with Aridia and Cloud Ring) and the South (Delve, Paragon Soul, Querious, Stain, Period Basis, and Esoteria).

Week three’s action served as the prelude to a bloody week four, including the loss of two titans during an evacuation operation. The week began with a major fight over a Tatara in KVN-36. As the fight escalated, Goon forces came to respond, under the leadership of fleet commanders John Hartley and kor anon. “INIT was fighting heavily outnumbered in Ishtars versus two Ferox fleets in KVN,” explained kor anon. “John got a Baltec fleet together to reinforce them. By the time we got there INIT had gone into [C-N4OD] and it was decided we’d jump in as well. The whole grid was filled with the Feroxes at the gate. We all de-cloaked and re-approached gate, killing as many boosters as we could on our way towards the gate. PanFam dropped caps on the gate at range and begin to engage as well. Bhaalgorns were the first thing that were targeted by Panfam. The fact we actually aggressed and managed to get out with over half our fleet was unexpected after entering that grid. We brought FAX support, but with the amount on the grid it didn’t really matter.” The Imperium lost 45.5 billion ISK on 164 ships, driven in part by the loss of all five FAXes on grid, whereas PandaFam lost 5.3 billion ISK on 76 ships.

After the showdown, both sides had a quiet few days in the North as far as active fleet actions. INIT did lose stations Tuesday and Wednesday, including a Tatara, a Fortizar, and an Azbel, followed by two iHubs in the Sphinx constellation. Thursday opened with Goon Bomber FC Dabigredboat wiping a Ferox fleet in KVN-36. “The bombing thing happened because of a trap,” Boat said. “We went to shoot a structure to see if Horde was crazy enough to bring Feroxes. They did. Elo [Span] (another FC) waited ’til they warped to him, he warped to them at the same time so they cross warped and when the hostiles landed, I bombed them. We had enough bombers to kill them twice over but as will bombing, TiDi makes it look like nothing happened. Bounties are instant, so my fleet knew it was dead.”

PandaFam continued their momentum across Fountain’s iHubs Friday, taking seven iHubs across central Fountain, with the Imperium managing to defend a few essential objectives. Friday’s remaining action was PandaFam’s continuing clean-up of Imperium structures in Fountain as they destroyed three Fortizars and a Tatara. To close out the week, INIT and The Bastion used the weekend prime time to evacuate supercapital assets into Delve after a month of a spirited defense of Fountain. During the evacuation, a Titan pilot warped to the wrong gate and provoked a capital fight as dreadnoughts gated in to destroy the stranded ships. The Imperium lost nearly 200 billion ISK on 92 ships, while PandaFam lost 106.7 billion ISK on 420 ships. By the end of Saturday, the Imperium lost four of the five iHubs they had hoped to defend, as well as an undefended Fortizar.

Goonswarm Skyteam member Asher Elias had asked The Initiative’s military leadership to buy two weeks for shoring up the defenses of Delve, according to senior Goon FCs on this past week’s Meta Show. Instead, INIT bought nearly a full month before withdrawing their major firepower South into ZXB-VC. “We held out far longer than NC. did in Tribute against greater odds,” CSM member Brisc Rubal said. “So I think we should be pleased with how well we did. I mean, basically, now that we’re out of Fountain, we aren’t tethered to having to control any territory. Delve is Goons space and they have a plan for defending it. We can help, but it’s not our direct responsibility. So that frees us up to be the mobile strike force that we like to be. We can go out and hit the bad guys where they live, rather than be forced to defend all the time. I’m looking forward to that. So far, these guys have been able to move and probe with impunity. I don’t think that’s going to be the case any more.” 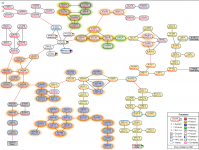 Sov changes in Fountain as of the end of week four. Map courtesy DOTLAN 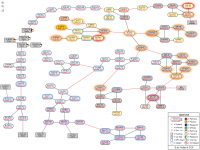 Querious sov changes as of the end of week four. Map courtesy DOTLAN

The South’s action this week, while not as flashy as the North, was certainly busier, with fights nearly every day. Sunday’s early action began with Legacy fleets attempting to hack or reinforce dozens of nodes across Eastern Querious, home to the Querious Fight Club. The iHubs were placed under the United Earth Directorate, a group mostly comprised of alts from the Peoples Liberation Army who made it a personal quest to save the iHubs for as long as possible. The fighting broke out across the region, ultimately leading to the displacement of 24 iHubs in the “floodplain” region that Imperium leadership was surprised to have lasted so long. Goons lost 15.2 billion ISK versus 8.3 billion ISK for TEST and Legacy forces. As additional, more critical iHubs came out of their timers in the EUTZ prime time, Goon hackers were able to save the iHubs in an essential constellation, sometimes called “Fake Querious”. Later action included a small Imperium Caracal fleet being chased out of G-M4GK, followed by Goons catching a TEST dreadnought on the wrong side of the G-M4GK gate in TCAG-3.

Monday began with a fight stretching across the 1-SMEB entry region into Delve as former spy corp Cincy Style Chili attempt to anchor more stations in Delve. One Astrahus was anchored and reinforced into hull immediately, while six others were destroyed outright. The Imperium expended 25.3 billion ISK and destroyed 24.1 billion ISK. Other Monday action included a fight on the TCAG-3 Ansiblex, a fight with BRAVE Caracals, and Dabigredboat’s dreadnought alt defending the TCAG-3 iHub. The Imperium also successfully defended the XZ-SKZ iHub timer in Period Basis, protecting a critical border system. 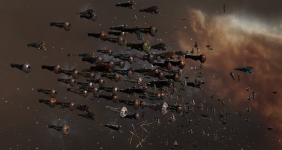 Early Tuesday EVE time had the Imperium successfully evacuate the Querious border Keepstar in 3-FKCZ under a good-sized supercapital umbrella (above). A few enterprising freighter pilots attempted to snipe the uncontested Keepstar withdrawal, but only managed to end up on killmails. To the surprise of many Imperium pilots who had expected stronger resistance in the border system, senior commanders announced that Imperium leadership had secretly planted dozens of Athanors around TEST and Legacy space that were set to anchor as the Keepstar unanchored.

This zugzwang gambit forced TEST and Legacy leadership to fight the anchoring citadels and allow the Imperium to withdraw with the Keepstar prize. As the Athanors anchored and TEST began to tear them down, however, Dabigredboat’s bomber fleet showed up to contest many of the TEST and Legacy fleets on grid. “So [the] Imperium anchored 100 citadels in one day, over three hours,” explained Boat. “As hostiles tried to kill them all, we picked them off , one dread here, one dread there. They couldn’t keep up with both the timers and the fleet. I think six got online.” He had specific praise for the National Goon Surveillance Agency, a scouting SIG. “NGSA had eyes in 95 systems. I told them to go active and I had eyes across the whole region of Esoteria and some of Paragon Soul.” By the end of the fight, Goons had lost 20.6 billion ISK, mostly in citadels, compared with TEST and Legacy’s 28 billion ISK loss.

Later on Tuesday the Imperium saved Ansiblexes in Delve, destroyed a Rhea in Legacy staging, and roughed up some TEST ships in TCAG-3. Additionally, some of the greatest excitement for the Imperium came in the surprising defense of the 8QT-H4 iHub as a Jackdaw fleet destroyed the hacking Storks with one second remaining on the timer. Imperium senior FC John Hartley put up a video on his YouTube channel including his realization on comms that the iHub was saved. The Imperium then dropped supers on the offending TEST fleet and cleaned up the grid.

Wednesday was busy as minor engagements filled multiple regions. The skirmishes included an Imperium attempt on an Evictus Ansiblex, a fight in 49-U6U, an Imperium Ansiblex defense, a border scrap in TGAG-3/G-M4GK, an Interceptor battle in Period Basis, and an Imperium Jackdaw fleet sniped by Muninns. Of particular note was an usual defense of the MKD-O8 iHub, part of the critical “Fake Querious” arm of the region. Imperium leadership was aware of a large form-up of hostile forces to contest the timer and dispatched an early hacking fleet from the GSF Offensive Entosis sig to save the iHub. After the out-manned fleet determined it would be impossible to fight the Legacy forces in the constellation, Imperium FCs announced they would withdraw from the area and make attempts on iHubs in Catch. As the small hacking fleet drew into 49-U6U, they were forced to dock immediately as the Legacy fleets followed them. Unfortunately for TEST and Legacy, GSFOE leader Diclorian Pilot had taken a secret, second fleet into the constellation and successfully defended the timer.

Friday’s action saw an Ansiblex fight in A-BO4V, the Imperium lose an undefended Ansiblex, an Imperium Jackdaw fleet destroyed an AoM Talwar fleet, and a Ranger Regiment entosis defense fleet stopped hacks in Period Basis and then destroyed some dreads in G-M4GK. Later in the day, Imperium fleets jumped into Catch after defending Querious and Delve against hostile hacks, then reinforced Catch border system 4-07MU before TEST and Legacy dropped supers to contest. The Imperium lost 10.3 billion ISK for 7.8 billion ISK in Legacy losses.

Saturday in the South was relatively quiet as action was primarily in the North for the evacuation of Fountain. However, a Goon Ferox fleet caught some PandaFam ships and a Goon bomber fleet caught some hostile forces in Stain. The main thrust of the day was over Querious iHub timers as outnumbered Imperium forces attempted to contest hacks, lead by FC Alice Homoloes. “[It was] like ‘we know Legacy have a Hawk fleet doing entosis cover’, so we decided to fight them, bringing some [hackers] to force them to take [the] fight,” Alice said. “We got outnumbered but decided we could still do decently with the fight. The result was alright, a .2 billion ISK difference,” he added. Goons lost 10.6 billion ISK and killed 10.4 billion ISK while contesting the PUB-0R constellation.