In the Great Wildlands on June 20th, 08:50 EVE time, a fleet composed of mostly DreddedEvE pilots with assistance from smaller corps attacked and destroyed an Aeon-class supercarrier and Erebus-class titan vessel in L1S-G1, both owned by members of Nova Prime. The two vessels, belonging to Cybione AYERDHAL and Gurvan HERAULT respectively, were caught unsupported by smaller capitals or subcaps. During the clash, the attackers swung hard and caused both ships to suffer critical existence failure. Nova Prime’s losses come to over 147 billion ISK, while the only loss on the side of the attackers was a single Archon-class carrier, hit by Gurvan’s Doomsday. 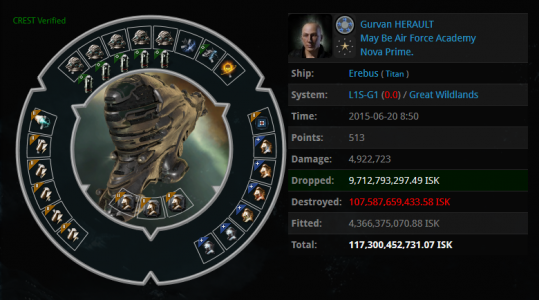 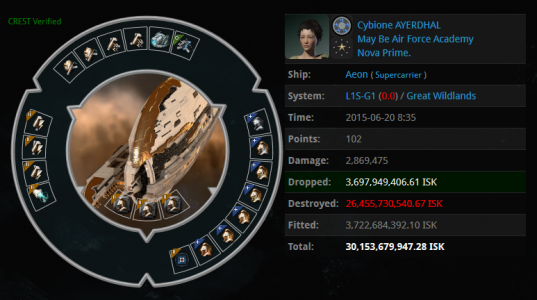 DreddedEvE used a mixed dozen dreadnoughts and carriers, along with assorted subcapitals including, of course, Interdictors, to assist with killing the massive titan and its pet super. At this time it is unclear who was leading the DreddedEvE fleet, as neither party has responded for comment as of yet.

Should any response be received, this article will be updated to reflect the new information.

This article originally appeared on TheMittani.com, written by Vos.