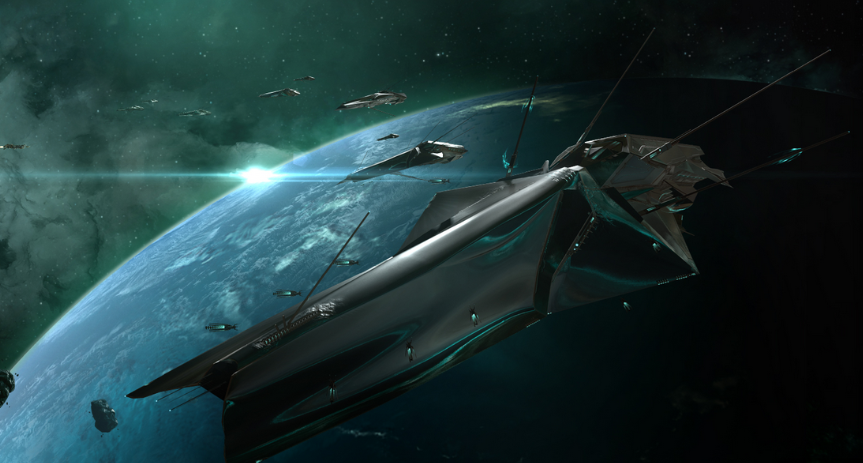 Who are these Drifters?

Drifters, a mysterious invading faction, first entered New Eden in early YC117 (2015). Capsuleers began to engage them after their assassination of the Amarr Empress, Jamyl I.

They continued to attack different regions of empire space, and all attempts at communication with them have failed. Experts hypothesized that Drifters are members of the Jove race, although we do not know if they evolved from the Jovian race or if they exterminated them. Now they are targeting nullsec, and maybe it is our turn…

Twenty-four hours ago, Drifters began to attack Capsuleer structures in nullsec. Since then, various theories have arisen as to what is going on. While it was first thought to be a glitch, an urgent fireside chat called by The Mittani confirmed that the Drifter attack in nullsec is not a glitch and all gameplay is working as intended at present, as stated by a GM Telomer in a facebook group chat. However, we need to be cautious about what GM Telomer stated as it is clear that sometimes, like in every organization, communication errors can occur. However, the silence of CCP is overwhelming as numerous nullsec alliances engaged in conflicts are now rushing home to defend their space. Maybe in the coming days some alliances will be able to take to their advantage the Drifter invasion.

The Mittani’s official statement on the Drifter invasion

“The Imperium was in the midst of prosecuting a war involving tens of thousands of real players. We are annoyed that we had to stop our player vs player warfare and grind through what amounts to World of Warcraft-style raid content, but we have already broken down how the Drifter AI works and have successfully defended all of our structures thus far – I look forward to going back to real player vs player content, which is why I quit WoW for Eve in the first place.”

So it seems that we have PvP, PvE and now DvS (Drifter versus Structure) content in the game, with this new threat to nullsec apparently breaking new ground in CCP’s policy around sandbox intervention.

This is what we know so far

Alliances rallied their forces to try to defend their structures as alerts came of each attack. Various fleets were sent out and were lost as players tried to figure out what exactly was going on. The invaders are from vigilant Tyrannos corporation (Drifters). Defending fleets reported that they were unable to D-scan or probe them. This affected the capacities of the fleet commander to determine the exact fleet size, and its composition was not known until it arrived on grid.

Ships were lost across nullsec, and many a heroic Capsuleer died defending their structures. Drifters responded harshly to the defending forces across New Eden. They did not hesitate to attack capital ships either, killing a Nidhoggur flown by Sadus and a Chimera piloted by GySgt Kossori in the first 24 hours of activity.

GySgt Kossori, who is a member of Evictus. Alliance, undocked his carrier to defend his home Fortizar in QN-6J2 from a 20-Drifter battleship fleet with support. GySgt Kossori told me that Drifters were acting like normal PVP players, anchoring on what seemed to be a fleet commander and coordinating their attack. Battleships were at 170 km from his Chimera. First, they yellow boxed him, and then the first salvos of lasers hit his ship. The battlecruisers webbed and scrambled him, making him unable to tether or dock back up. In a few seconds, the Drifter’s coordinated attack dealt massive damage and killed his carrier, having dealt around 385,000 points of damage in under one minute. Then they continued hitting the Fortizar and reinforced it. While other structures around the universe were also put into their reinforcement timers, there is no complete list of affected structures at present.

Will New Eden stand still and be annihilated by this Drifter menace? Will alliances put their agendas aside to defend their collective existence? Or will they end up assisting the Drifters? Here at INN, we can’t wait to see how this plays out – after all, there is always a traitor somewhere.