H1Z1: BASE BUILDING AND RAIDING

The world of H1Z1 is harsh and sometimes you just want a dry, safe, place to hang your tactical helmet and enjoy some quiet time with your fellow survivors. Perhaps you’d use the time to cook up some rabbit stew, dress your wounds, or craft some more bullets for your AR-15. After a while, the collapse of civilization doesn’t feel so bad. That is, until the evening your neighbors decide to scale your walls, blast your doors off the hinges, and make off with all your supplies. Welcome to the apocalypse.

In order to build a community and survive the world of H1Z1 in style, you are going to need a place to stash supplies. You lose everything on your person when you die – and you will die a lot. A base gives your group a common place to gather and share items. Here you can keep your crafting tools and stash your surplus gear in relative safety.

The structure system in H1Z1 allows for some very elaborate construction. Your options range from an easily destructible wooden shack, to metal buildings, decks, and stairs. Structures take a lot of materials to craft and, large complex bases are usually a group endeavor.  Its common for groups to have multiple bases – one for long term storage and others near farming or PvP areas.

As in real life, location is everything. Decide on the purpose of your base and choose a location accordingly.  If you don’t want the base noticed, you should look for spots in the woods or hills that aren’t easily seen from common traffic areas. Roam around and look at your location from several angles before you place that first structure. If your goal is to have a forward supply depot, a simple metal shed in an obscured spot near your favorite PvP area will work well as temporary storage. This forward base will likely get raided so you want to limit the amount of supplies you keep here.

To build bases you need to gather a lot of materials. The two bottleneck items in the structure recipes are scrap metal and wood. If you are building in the forest, wood is easily acquired, but forward thinking is required for building near cities. Scrap metal is found in wrecked vehicles and can also be harvested by hitting a vehicle with a crowbar. Expect to check a lot of vehicles if you are building a large base. Many of the required metal items can be scavenged, which will reduce your reliance on scrap metal. You can find the full recipe list for structures, and their resource requirements below.. 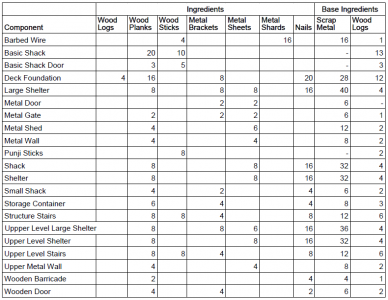 The layout of your base will determine its overall security. A single deck foundation has only one gate to break. A 4×4 grid of tamped foundations filled with concentric rings of walls and gates has at least three gates to break. Before you start building, it helps to have a plan in mind for your base’s layout. You should ensure that every member of your group knows the plan. If you’re feeling really serious, there are some great SketchUp objects which can help you plan and communicate your layout.

After you chose a location and determine the layout of your base, you will need to start gathering supplies. It is useful to make a small staging base near the construction site to store materials and prepare the larger structures. A metal shed with a furnace, workbench, and a bunch of storage containers makes an ideal temporary base-building outpost. The fastest way to gather supplies is to take three friends and drive around in a-four person vehicle like the offroader, or the police car. One player takes on the role of driver, and looks after the vehicle while the other three hop out and loot wrecked cars. The trunk of your vehicle can hold the large volume of supplies you will need.

The image below shows a hypothetical base for a small community of 5-10 players. It consists of a ground tamped foundation with double high walls and a gate. Inside those walls, a deck foundation with double high walls and a gate just fits. On the deck foundation are two large structures and stairs. The final item tally for this base is 1 ground tamper, 2 metal gates, 2 metal doors, 1 deck structure, 1 large shelter, 1 upper-level large shelter, 1 structure stairs, 1 upper-level stairs, 25 upper-level metal walls, and 26 metal walls. In terms of raw materials, that comes out to 526 scrap metal and 240 wood logs. The scrap metal requirements can be reduced by about 40% if you gather metal sheets instead of crafting them. 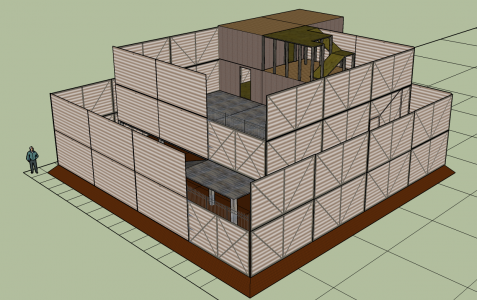 Base Drawing in SketchUp

No base is completely safe, but there are ways to make them safer. Some things to consider are overhangs, barbed wire, and punji sticks. By placing an upper level large shelter so it hangs over the edge of the base, you can create a place to snipe enemy players and zombies. Furnaces placed near the edge can be used for additional cover. When players raid your base, they will need to stand near the gate and place explosives. By staging barbed wire or punji sticks near the gate, you will take a small amount of damage when entering your base. Raiders lingering to place explosives will take more.

For long-term secure storage, you can build an upper level shelter and then use a demolition hammer to destroy the stairs leading to the upper level. Since enemy players can’t build on your foundation they won’t be able to get up there even if they are able to blow the door. The drawback of this approach is that you need to craft new stairs every time you need to access your storage.

To raid a base you’ll need to defeat the metal gates and any metal doors on shelters in order to get at the storage containers. Unfortunately, it is no longer possible to replace the doors and gates with your own anymore. This previously was a valid tactic for claiming a base that also resulted in excessive griefing. The remaining reasons for raiding a base are to take the owner’s stuff and, of course, increase your immersion. It will take a considerable amount of explosives to raid a base so this is usually a group activity.

Much of the information below is subject to change as Daybreak continues to tune the base raiding mechanics. The numbers below reflect the notes from the most recent patch announcement. With the patch coming this week base raiding is getting more difficult. The increased resource requirements to pull off a raid should cut down on grief raiding and force attackers to think twice before committing their supplies to a raid. Before you protest too much, bear in mind that prior to this patch, one player could grow enough corn in 14 hours to make enough ethanol to destroy any base. The following table lists all the supplies you will need to destroy the doors and gates in the game.

IED and land mine explosions aren’t currently damaging structures correctly. Until these are fixed the dominant meta will remain biofuel or ethanol. Biofuel is obtained from animal fat, which is gathered by skinning animals. Ethanol is more powerful than biofuel and the crops required to make it are easily grown inside your base. The drawback of ethanol is that the recipe requires 2 empty bottles per crafted ethanol, which is the major bottleneck in production.

When looking for a base to raid, you should look for targets that appear active. Some players may allow their base to fall into disrepair to make it seem less attractive. Spend some time watching the base with binoculars or a rifle scope and count the players there. If you have a PvP encounter with some decently geared players, follow them and find where they live. The best bases to raid for profit will have a large group living there. Don’t raid a base for a least a week after it was constructed unless you are trying to intimidate your competitors.

When you set off to raid a base you want to ensure each member of your group has one gun with 1-2 clips of ammo, an edged weapon for processing wood, and a backpack. You should carry the animal fat, corn, yeast, and water to your target then cook your biofuel and ethanol on site because the ingredients take less room in your pack. Bring 10-20% more explosives than you think you will need. Leave all non-essential items at your base. You want as much room as possible for the spoils of war.

When on site you are going to need to move quickly. Use a grenade to clear out any punji sticks by the gate then start placing your ethanol or biofuel individually. Do not stack the fuel because it will decrease the damage done. To ignite the fuel you can use a single IED or shoot the containers a few times. Be sure everyone is well back from the explosion before detonating.

Once the gates are down you can start working on the shelter doors. Look for doors which are close to each other and position your fuel in between. The fuel has a large explosion radius so you can save some fuel this way. When you’ve breached the doors have your group spread out and start grabbing supplies from the storage containers. Any low-priority items can be taken from the storage containers and thrown on the ground. This will make them despawn after a while. You can melt down excess guns into metal bars if your target has a furnace.

Base raiding is an excellent group activity and it can be very rewarding. It is a great way to acquire lots of supplies without the tedium of searching for them. Also, if the target mounts resistance, you can have some epic PvP battles. Your base is the center of your community and there is a strong sense of accomplishment to be had from defending your base or raiding that of another.

Go forth and build, survivor.

This article would not have been possible without the tireless research and experimentation of Fort, Zettia, and Space Mexican.