In my previous article I went over a lot of basic concepts that should be familiar to anyone who’s played a lot of strategy games, with concepts such as range control, and applied DPS being fairly common parts of how most games are constructed. However, EVE PvP has a component that’s missing from most RTS style games, and that’s an active combat repair system that’s competitively viable.

For example, in Age of Empires 2 or Command & Conquer, the healing available to players is predominantly non-combat, being low impact on the battlefield and requiring the use of units which are either immobile or heavily vulnerable.

Even in a game where this ability does exist, it tends to be limited to one faction, and be a heavily emphasised factor of that faction. In Starcraft, the Terrans have access to the Medivac (or Dropship/Medic combo), which is limited to only being possible with a few units, but represents a cornerstone micro-focused strategy if it can be successfully pulled off.

By contrast, pretty much every serious fleet in EVE that’s above the ever nebulous descriptor of “Small Gang” will bring some form of remote repairs with them, typically in a pair in order to allow them to be mutually supporting. As such, understanding the time in which you have to act before Logistics can have an impact is crucial to being able to mitigate them on the battlefield, and the tool I’ve personally used to conceptualise this – especially in large fleets – is by trying to work out what “Kill Window” I have to work with.

What is a Kill Window?

One of the key things that is important to understand is that when repairs impact a targeted ship, your fleet’s effective DPS is going to be reduced, even if it isn’t completely nullified. This is because your DPS is now working against the active tank provided to it by the Logistics wing of the fleet. Whilst you might still be able to break the target during this state, it’s likely to be an inefficient use of your fleet’s DPS, unless you can secure the kill quickly.

To give this some context, let’s imagine you’re in a fleet that does 10,000 DPS and you’re shooting a ship with 200k EHP. If you are able to shoot at it for 10 seconds, it will be at half HP, with only 100k EHP left. However, if at this point reps start landing, and you are now fighting against a 7,500 DPS active tank, it will take you 40 seconds to kill the target, as you’re only doing an effective 2,500 DPS. If at this point you switched to the secondary target instead, you’d return to doing your full 10,000 DPS against the fleet until their logistics wing can react. Ideally, they are too busy repairing the previous target during this time, and you’re able to kill the other target in 20 seconds.

As such, I generally want to try and kill a ship before reps can land, or swap to a different target. As a result, it’s important to be able to estimate how much time you’ll have before an opposing fleet’s repairs will land, in order to allow you to prepare to pick another target, and that length of time is what I refer to as a “Kill Window”.

How Long Does it Take Reps to Land?

Let’s break the process of getting remote repairs in a fleet down into a series of discrete steps, so we can understand what causes the delay between someone being shot and them being saved by Logistics. It’s important to remember within this that EVE doesn’t care about fractional seconds (to some extent), so we’ll be counting ‘Ticks’ of delay, rather than seconds.

This means that there are 3 main components that cause delay: Broadcast Time, Locking Time & Module Delay. All of these are things that are relatively static, with only Locking Time changing depending on the ships being used.

As the partial seconds of lock time do not matter and the locking time formula is static, we can therefore calculate the breakpoints at which signature radius’ cross over between ticks on each individual ship. 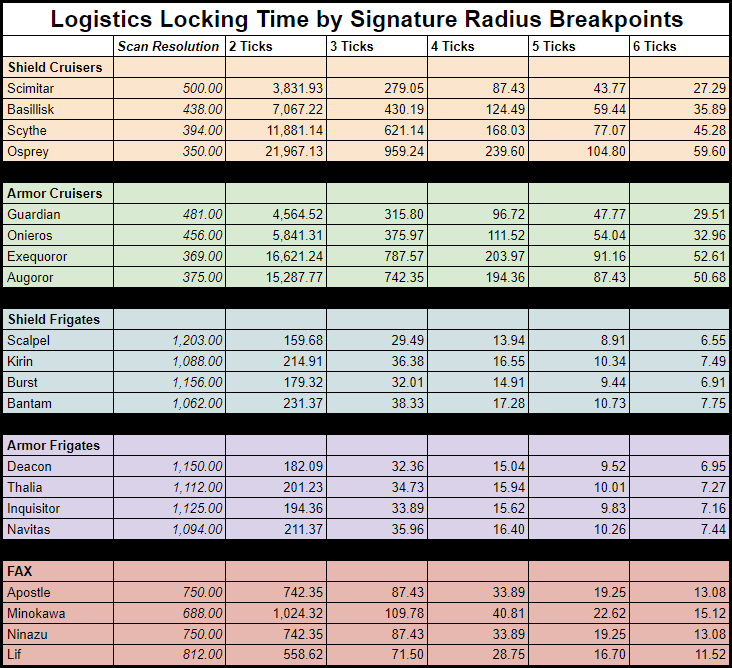 For the record, targeting time is calculated using the following formula;

What Does This All Add Up To? 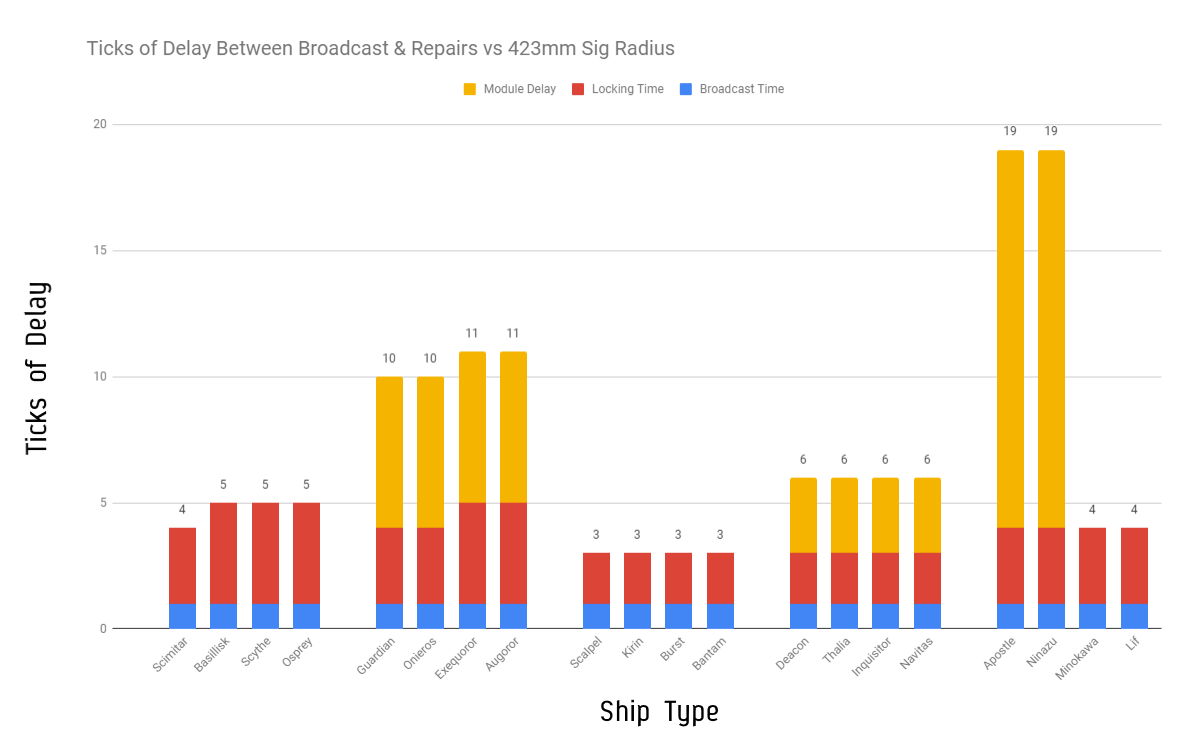 As you can see what this roughly equates to is that armour ships have to wait half as long as shield ships to receive repairs, which means that any armour ship has to be able to survive for a longer period of time under fire before it can stabilise. This contributes to armour doctrines having a much larger kill window to try and take advantage of, as a result of the delay in armor repairs applying to the target, which is compensated for by the addition of greater buffer tank and the freeing up of mid slots with which to further mitigate damage through E-War.

Overall the actual delays here are optimistic as well, as each factor in this equation is reliant on perfect piloting, which is unlikely in any combat situation. However what it should do is serve to make it clear when the hard cutoffs land, and illustrate that if, after 10-15 ticks of shooting a subcap, if it’s not dead or in the process of very quickly dying – It probably isn’t going to die. This is because at this point the advantage in time your fleet has to shoot at a target whilst the fleet’s logistics are unable to support him has passed, and they should have locked and be working to keep the target alive, which maximises their effective usefulness on the battlefield. I will however note that this is a rule of thumb and WILL NOT BE CORRECT IN ALL CASES.

I hope this has helped you understand a little more about the limitations of logistics, and give you some ideas of how you might use this delay to your advantage in fights, or how to make sure you keep that window as short as possible for yourself as a line member. If you’d like to see a deeper explanation on how to impact these kill windows and reduce the efficacy of remote repairs as an FC, let me know in the comments.