This article is going to serve as an explanation of one of the most discussed, but in my experience, least understood boogeymen of the EVE Online economy in the current day: Skillfarming.

I plan on saving an exploration of the impacts of this activity on the rest of the game for another time, but the one thing I wish to highlight at this point, and will try and show throughout, is that PLEX is no longer a fiat currency which serves to facilitate the transaction of game time for game currency. PLEX is now both a currency, and an industrial input, and this opens it up to vastly more avenues of demand from the playerbase than before.

With that in mind, let’s move forwards and take a look at just how Skillfarmers maximise their PLEX:SP conversion rate.

The first thing that’s key to understand is that Skillfarming is no longer done on an individual character level. Instead, it is done on an account level, in order to take maximum advantage of the discounted training that Multiple Pilot Training Certificates (MPTCs) provide, by having 2 MPTC skill queues running alongside 1 traditionally PLEXed account. 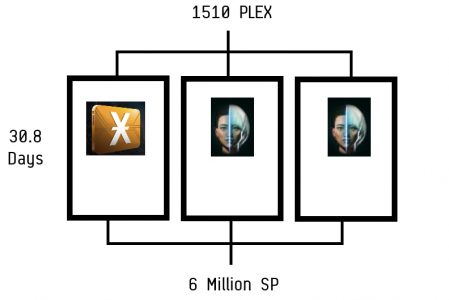 Combining this with the simple fact that Skillfarming accounts do not need to undock or expose themselves to risk, and therefore have no penalty for using +5’s at all times, Skillfarms are able to maximise their SP rate at the limit of 2700 SP./h. At this rate, it takes 30.8 days per character slot to produce 2 million SP, enough to fill 4 Large Skill Injectors.

In fact, this was one of the best ways to profit from the repeated sales on Galaxy Packs that went through in 2018, which kept MPTCs routinely below their PLEX cost due to the massive oversupply on the market. This can clearly be seen by the almost saw-tooth like nature of the market in that period, where demand would push up prices, until sales would once again depress them. 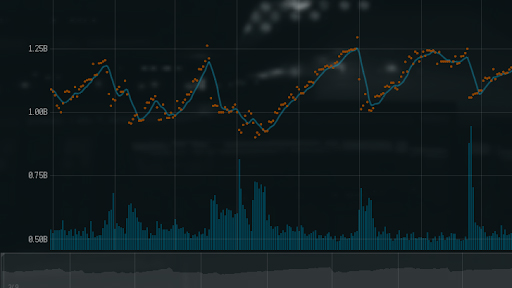 This relates to one of the other key principles of Skillfarming, which is that as there is a 30.8 day leadtime in getting to the market with your SP, your profit is based on where you expect the market to be at that time. This means that whilst Skillfarming calculations may not be profitable at the current moment based on simply looking at the relative positions of Large Skill Injector and PLEX worth, it may be possible when the 30 day long ‘tail’ is taken into account, and LSI’s have risen in price in order to meet the rise in PLEX cost. As such, when skillfarming it is important to note at what ISK you bought all the items used to create the LSIs you put on the market, and make the judgement as to whether it is profitable to sell with that information in mind.

A good rule of thumb, however, is simply that if PLEX is rising, and you expect it to continue rising, then skillfarming will likely be profitable when extraction day comes around, as all PLEX based goods are effectively linked via the New Eden Store allowing transmutation of PLEX into any other in-demand PLEX based item (such as Skill Extractors or MPTCs) if there is a lack of them on the market causing them to become overvalued vs PLEX.

Biology 5 is a must-train on all Skillfarming accounts, due to the training speed boosters which CCP have handed out previously, as these allow a further discounting of the PLEX:SP ratio when bought cheap and used for the maximum amount of time.

One slightly amusing factor which CCP have recently introduced is the fact that you can now even Skillfarm as an Alpha, if you’re incredibly dedicated. The newly increased Buddy Link SP (750,000) is enough to fill an injector and a half, and as the SP is delivered via the redemption queue rather than directly to the character sheet, it does not count towards the 5 million SP training limit that Alpha’s have. This means that you can train an Alpha to 5 million SP, then inject the 750,000 Buddy Link SP, and extract it – only paying the PLEX cost for the Skill Extractor. I’d recommend against doing it, as it feels somewhat exploity to me, but at least the knowledge is out there.

How Much ISK Does It Make?

In order to demonstrate just how profitable Skillfarming can be, even with a relatively stagnant market, here’s the rough napkin math on profitability on a 30.8d cycle, using an extra 40 PLEX to estimate the cost of the extra 0.8 day. This is not an accurate report, as taxes and brokers fees will absolutely cut into your margin given the large amounts of ISK being thrown around, but it goes to demonstrate that whilst Skillfarming might not be immediately profitable on paper, LSI costs often climb to match PLEX prices.

The profit per account is ultimately relatively minimal, but equally so is the maintenance. Each extraction cycle takes around 30 clicks total, and only has to be done once every ~31 days, as such it’s entirely within the possibility of a regular player to run 10 skillfarm accounts, spending about 2 hours a month doing so. If we assume an average profitability of 400m per account, that gives us around 8 billion ISK a month, with the only risk you’re being exposed to is the volatility of the PLEX market. This is before the other benefits of simply having 10 extra accounts; PI, Orca Mining, T1 Industry, Cloaky Camping – All of these activities scale up relatively well per account with minimal added effort load, and can add to your overall income.

How Do I Get Started?

The actual investment required to get started in skillfarming is relatively minimal, as all you need to do is have 3 characters on one account with over 5 million SP with +5 implants and a perfect remap. There are however, some common ways to kickstart your own personal skillfarm, so let’s go through them.

This is the easiest way to begin and what I personally started with. Effectively, you just take one of your existing accounts, and use MPTCs (or Injectors) to train up the other two slots to over 5 million SP. After this, simply extract the two alts as normal, and keep your main training as it already is. 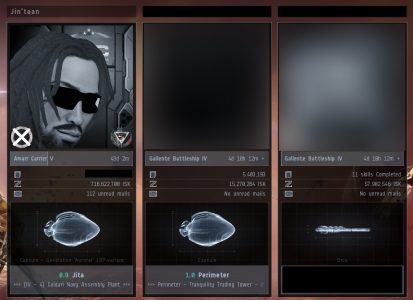 As the main ‘cost’ of Skillfarming is in the 500 PLEX per month cost of the non-MPTCed account, and that’s something that you’re obviously paying for the privilege of using the main character on it, you can simply subsidise the cost of that PLEX via skillfarming on the other two likely inactive character slots.

As 5 million SP is the Alpha training limit, you can also reach this point entirely for free as long as you’re willing to go through the RSI to update that many accounts. I wouldn’t personally recommend this technique for actually getting started, as doing it in any meaningful timeframe requires you to rely on training up multiple characters in parallel and then paying the 1000 PLEX cost to transfer three finished characters onto one account. This process still takes 6 to 7 months, and requires a petition to be created per character you wish to transfer, which is incredibly time consuming.

This method is however, the most ISK efficient way of setting up a skillfarm, and given the log-in giveaways coming later this year, there’s no reason to not have an alpha account or 50 set up to farm that to your heart’s content either.

The fastest way to get a full skillfarming account is also both the most obvious, and most expensive. Simply start up a new buddy account, PLEX it, MPTC the two other accounts, and train them up to 5 million SP the old fashioned way. This takes a little over 2 months, but costs roughly 12 billion ISK, which it will take a significant amount of time for your skillfarm to recoup. Make sure that you are keeping your expected RoI timelines in mind when deciding how heavily to invest.

I’ve also recorded a companion video for this to help walk you through the process:

With all of this laid out, I hope that you are at the very least more informed about the mechanics by which Skillfarming takes place, so that you can more accurately assess what it is and form your opinion from that. I also hope it will enable those of you out there who were curious about it as an ISK making method to better get started with this, and start making your own fortunes off of the SP economy.