If you’ve ever taken the briefest interest in FCing, or really any EVE PvP at all, you’ll know how crucial positioning is to winning a fight. Putting your fleet in a spot where they can kill the enemy, whilst the enemy can’t kill your ships effectively, is one of the most effective ways to establish control over a fight.

Where exactly is that sweet spot of safety for you and death for your enemies?

Well, that’s the crux of the issue. It can change drastically based on what threats to your fleet are on the field, what ranges they can interact with your fleet at, and how effective said threats are at impacting you. This makes knowing the ranges of various threats and incorporating them into how you evaluate the battlefield is important.

It’s not going to be possible for us to go through every single meta ship and doctrine, and how well they apply at various ranges to every other meta ship and doctrine, because by the time you’d be reading it it would most likely have been rendered irrelevant by meta shifts. As such, we’re going to focus instead in on one particular thing at a time which is unlikely to change. This discussion will then be contextualised with an example of a modern matchup, and how that threat impacts where you’d want to position your fleet within that matchup.

We’re going to start right at the very top though, and take a look at what I personally believe to be the single most impactful threat on the battlefield – Long range webs.

Webs are one of the most crucial parts of fleet scale PvP, in my opinion as it’s one of the few modules in the game which allows for offensive range control, by being able to reach out and slow down any target. This has a number of effects that you should be familiar with, such as allowing guns with poor tracking to apply to smaller targets such as cruisers or destroyers, and allowing you to hold a ship which is out of position in place so it can be destroyed.

They also come with slightly more sneaky fleet applications which might not immediately spring to mind. Webbing down a fleet’s FC or Anchor in order to slow down the mobility of a fleet, or forcing an anchor change can not only disrupt the enemies command change, but also will likely leave the fleet whose initial anchors were webbed away at a disadvantage in terms of positioning skill. This is something you should be prepared to deal with if you end up fighting in web range before all webbing ships are taken care of.

Webbing range is also highly variable depending on the fleet comp of your opponents, with shield fleets being able to make the best use of the Huginn and therefore having more range, whilst armor fleets are forced to rely on the Loki and Bhaalgorn. This graphic details the range of those three main fleet ships with a Fed Navy web, along with heat and links; 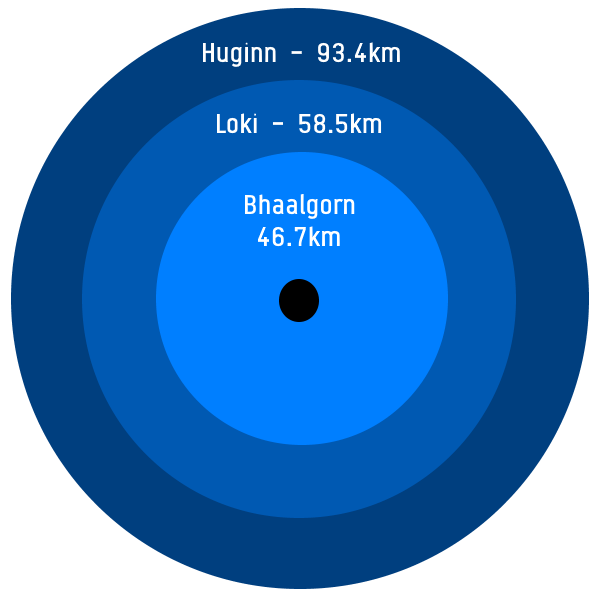 For the sake of completeness I should also mention the Hyena, although that is typically fit with basic T2 webs, and as such has a maximum range of 50.1km.

As stated before, it’s time to take this out of simply looking at the raw numbers and look at the slightly more complicated and fuzzy numbers of a matchup you might see on TQ today, and in this case I think the Ferox-Munnin matchup presents an interesting example. Let’s lay out the basic facts;

In theory it might make sense to try and get in close in order to use the Munnin’s speed advantage and get under the Feroxes’ guns, in order to take advantage of the highest on-paper DPS differential between the doctrines which is at the 10-30km range.

(All graphs produced using the opposing ship as a target, moving at full speed at 60 degrees)

However, as we know from earlier, entering anywhere close to this range in order to try and utilise this mismatch puts you firmly under threat of webs. And as such, the graph presented above doesn’t represent the reality of the situation, leaving you an applied damage with a graph that looks like this;

This means that the Feroxes are going to be able to achieve applied DPS that is on par with the Munnins with only a single web, with Munnins having to get very close to start to take advantage of their mitigation – opening them up to further threats such as neuts or scrams.

These threats then threaten to take away one of the key advantages highlighted at the start of this breakdown for the Munnins, which is their ability to dictate the range of the fight, and that comes with the benefit of being able to safely disengage from the fight. This is something that shouldn’t be underestimated as an option, given how well it allows you to react if the situation changes, and save your fleet should one of the Feroxes light a cyno and bring in support.

As a result of this Munnins will generally try and fight outside of web range, in order to exploit a DPS mismatch which falls outside of this, allowing them to retain their mobility. In this case, the preferred range is actually the 90-110km bracket, where Thorium doesn’t reach far enough and Spike lacks the distance to be able to track properly;

Increasing the distance of the fight also has the effect of lowering the overall DPS experienced by both sides, which increases the time-to-kill of the DPS based Ferox fleet, whilst not affecting the time-to-kill of the mostly Alpha based Munnins. This allows Munnins more time to catch reps without offering the same to Feroxes. The increased time-to-kill also allows Munnin pilots more time to activate their ADCU, which helps tilt the EHP factor back in the Munnins’ favour, as long as they’re able to activate it early enough to matter.

Staying at this range also doesn’t preclude moving in to a closer range later, especially if all webbing ships can be dealt with at this range before turning in for the kill later on in the fight.

This particular matchup also makes a compelling case for Feroxes to be carrying Tungsten if they’re in a warzone where they may run into Munnins;

As you can see Tungsten—despite normally being an overlooked ammunition choice—is surprisingly effective at this particular range, and should allow Feroxes to attempt to trade even at this range, although Munnins will still hold a clear advantage.

For most existing FCs, I’m sure that the ranges of webs (and logistics, amongst other things) are already etched firmly into your brain. However, for aspiring FCs, starting to build up an awareness for what’s going on in a battlefield is crucial for your future success. Try and pay attention to where you as a DPS or Logistics pilot are positioned with regards to your opponents’ recons, and try and understand why this particular spot has been chosen, and how whether or not you can be webbed is impacting the effective DPS both fleets are applying.

Looking into Pyfa and understanding how well your fleets can apply to ships you expect to fight with and without webs, and at various ranges and angles is also something I highly recommend. Not only will it better highlight how crucial they are to a fleet composition, but it will also allow you to pinpoint DPS mismatches of your own. Then you can exploit those, on the battlefield.

Still, I hope this has helped at the very least, and keep your eyes peeled for the next one of these coming your way.

Until then, fly smart and take care!