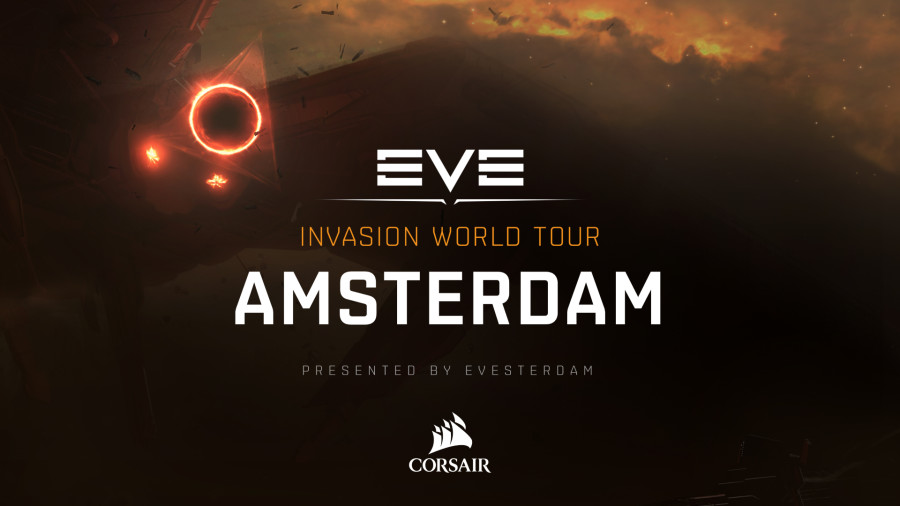 So, Evesterdam 2019 has come and gone, and what a fantastic time it was too. More than 350 players and developers all got together in Amsterdam to eat, drink (or smoke), discuss EVE Online, and just generally have a great time.

Obviously, any EVE-meet that is run in collaboration with CCP will have some presentations from CCPers, and this year was no different. CCPs Guard and Falcon kicked off the weekend at 10:30 UTC on Saturday, and they were joined by a new face, CCP Dopamine. Dopamine is the newest member of the Community Team at CCP, and will be responsible for interfacing with players on supporting events such as the StreamFleet Invitational or the Anger Games, as well as being the primary CSM manager going forward. I had the chance to chat to Dopamine a couple of times across the weekend, and he’s a really nice guy, so if you get the chance to meet him, buy the guy a drink, he deserves it.

The Keynote Address, hosted by CCP Burger, was a really solid start for the world tour events, with a short trip down memory lane and into the history of EVE’s UI interspersed with just some of the major announcements we were anticipating. Additionally, CCP Fozzie discussed the upcoming War Declaration system, and CCP Psych showed off some new work on an Agency 3.0 interface, bringing missions into that system more clearly, alongside other new features. Finally, Katia Sae’s journey around every system in New Eden was celebrated, with a gigantic statue of her player model being added to her home system of Saisio. According to CCP Fozzie, this statue is around 50KM tall, which is insanely large.

The announcements also included the plans to introduce not one, not two, but three new ships in the May Release – the Nergal, a Damavik-styled Assault Frigate; the Draugur, which is a Kikimora-based Command Destroyer; and the Ikitursa, a Heavy Assault Cruiser styled after the Vedmak. As well as these new hulls, we will see new Mutaplasmids for both the standard and assault variations of Damage Control modules.

Other Saturday CCP sessions included CCP’s Dev Variety Hour, where CCP Fozzie discussed the upcoming balance passes and other gameplay changes through to July in more detail; CCPs Bartender and Fozzie discussing Third-Party development and tools; as well as the session by CCP Psych that took a deeper look at the Agency and some of the upcoming changes announced at the Keynote.

On Sunday, we saw a late-addition session of a lore panel with CCP Burger’s “Angry CONCORD Guy” alter-ego, ISD Thalack, and ARC’s Uriel Paradisa. The lunch break held an impromptu “Burgers with Burger” lunchtime trip that filled a small burger joint in about five minutes, before CCP Ghost provided a look into the numbers and minds of players. The afternoon was rounded off by the Glorious CCP (MMA) AMA – CCP collectively agreed pineapple should be a pizza topping, which almost had CCP Falcon throwing punches – and, of course, the poignant Closing Ceremony in which we bade farewell to CCP Guard.

Curiously though, in my opinion the true star of the weekend’s presentations was the “Incredible Data, Incredible Experiences” session by CCP Ghost. I went into this session really not sure what to expect, and I sat near the edge of the seating just in case, but this session lived up to the ‘incredible’ part of its name and I don’t think there was a moment I wasn’t really engaged with Ghost’s discussion. If you haven’t seen it, you absolutely should find it in the Day 2 stream VOD and spend 45 minutes of your time on it. I’m likely going to massacre the presentation in my summary here, but I don’t want to spoil it for those of you who haven’t seen it – Ghost discussed a bit of psychology, a lot of interviews and analytics the teams at CCP have undertaken, and some information about what it takes, on average, to become what he describes as an “elite” player of EVE Online. As a hint, it’s not just a ton of alt accounts, but they certainly help!

A part of Evesterdam has always been the way players indulge themselves in the evenings, with either a drink or a joint (or both!) depending on the person. This year for the first time there were ‘organised’ events every night of the weekend, starting on Friday with the traditional “welcome to Amsterdam” meet at Cafe Schuim. For anyone who hasn’t been to Schuim, it’s a nice little bar with a great range of drink options, some good music and a really nice burger. This is normally a relaxed evening for people to meet up with old friends, introduce themselves to new ones, and get in the right mood for the weekend, and this year was no exception.

On Saturday evening, I organised a dinner for Imperium members. In total, 37 guys showed up to the La Luna Steakhouse, possibly marking the largest contingent we’ve ever crammed into a small Amsterdam restaurant. The food was good, the staff were really great and helpful, and I would certainly recommend it to anyone if you’re looking for a decent meal that’s reasonably-priced by Amsterdam standards. Following the dinner break, of course there was the usual Compagnie Theater party, which was something like seven hours of drinking and discussion with CCP Developers – Skol!

Then on Sunday, for the first time ever at Evesterdam, we had a boat party! The ship set off along the river at 21:00 local, made it back to shore at around 23:00, and everyone seemed to have a good time, though the necessity to exchange pre-bought tokens for beer was a little odd to begin with. Other than that, the main things I remember about the boat was that it was damn cold when we were on the outside deck, really – but all things considered, yet another good night, and I’m looking forward to next time round.

Another new aspect CCP brought to Evesterdam this year was the first of the seven Invasion World Tournaments, in which up to 32 teams pit themselves against one another in a series of single-elimination death matches. This tournament, along with the rest of the event, was sponsored by Corsair, who provided a set of full battlestations for players, referees and streamers to use. This was my first experience with the Corsair One platform, and it’s a really nice machine, I want one. Corsair also provided an RGB gaming keyboard and mouse setup for the overall winners, and a mouse for the runners-up, which was a nice gesture.

This 2v2 format was a fun addition to the event, and huge congratulations to Nik Domar and Vasama on their win. I hope you enjoy your free trip to Fanfest 2020. Commiserations to semi-finalists and runners-up. I hope you can have other opportunities at other meets throughout the year and continue showing off your skills.

The tournament was also CCP Dopamine’s first foray into running a tournament alongside GM Archduke and a few volunteers, and despite some initial confusion around the rules, these guys had it all moving really smoothly throughout the weekend. Really great showing for a first attempt, and I look forward to seeing Dopamine and his guys grow in the role as they run more tournaments, both at live meets and supporting player-run tournaments in-game.

A Changing of the Guard

Of course, a weekend round-up wouldn’t be complete without mentioning the emotional send off for CCP Guard at the Closing Ceremony. CCPs Falcon and Dopamine were on-stage to orchestrate the community farewell at what will be Guard’s last official EVE-Meet as a CCPer, where Falcon shared his initial belief that Guard’s departure was a practical joke until he saw the resignation letter.

The first part of saying goodbye was a video organised by StreamFleet, with messages stitched together from all the community members. This video, probably five or so minutes long, included messages from the StreamFleet team, the wider twitch streaming community, CSM members, and even more among the community, and Guard was visibly emotional as he saw just part of the results of his work.

After this, event organiser Dierdra Vaal brought a number of community members on to the stage, to present Guard with a ton of leaving presents. He received a one-off Rixx Javix poster, signed on the reverse by Guard’s CCP colleagues, a jar of specially-made Ghost Pepper Chili sauce, a photo album of a vast number of pictures of Guard and the community, and some specialty Belgian beer.

CCP Falcon then presented Guard with CCP’s leaving gifts for him. First up was a pressed vinyl album of PermaBand’s greatest hits, entitled “Standing Guard”, of which CCP made five especially for CCP Guard. Finally, as befits someone of such community well-wishing and impact, they announced that in his role as the Commander-in-Chief of the Space Police, the most fitting way to memorialise his impact on EVE was to rename an ice planet in CONCORD’s home system to “Yulai IX (Kjarval)” as of the April release. This final gift makes CCP Guard the only individual to have a planet in the EVE galaxy named after him, which I personally feel is such a fitting tribute to a wonderful developer.

As I sat in the airport on Monday, exhausted and excessively hungover, with my flight home delayed, I thought again and again about whether this weekend had been worth the time I spent on it. The answer, every time, was absolutely. I had a massive ton of fun, I caught up with old friends and had the chance to make new ones, and spent far too much money, enjoying it all the way. If you haven’t yet been to a real-life meetup, I’d highly recommend you do so, it’s worth it.

I want to round this off by saying thanks to some people – firstly, obviously, to Deirdra, Anne, and all the Evesterdam team – it was a great weekend all round. Secondly, to CCP for supporting it all and giving some really great talks, and specifically to all the guys in CCP’s community team who helped organise some interviews for INN – you readers will be seeing these over the next week or so. Next, to the StreamFleet Team, all of whom put in a heroic effort to make sure everything ran smoothly on the back-end so everyone at home could watch. And last but not least, to all the players who turned up and made it such a blast, especially the Imperium guys who came to dinner and didn’t stiff me for the bill. I look forward to seeing you all at the next one.

An EVE Online player first and foremost, I am a Goonswarm Federation Diplomat and Fleet Commander. I'm glad to be finally taking my interest in the wider community and doing something about it through my role here at INN. IRL, I am a vaguely committed uni student, love to SCUBA dive, and enjoy hitting people with swords. Seriously, the swords are great fun.

Surgical Strikes to the M...

Earlier this month CCP announced their next round of up...

This Weekend: Enter the P...

What's up everyone! CaptainTutu here! Welcome back to T...