This year’s EVE Invasion World Tour kicked off this weekend with EVEsterdam. It opened with a keynote that was best characterized as subdued. Part of that, no doubt, stemmed from this being the final public event for CCP Guard. We were, however, introduced to his successor, CCP Dopamine.

Though the keynote lacked excitement, CCP Burger delivered some interesting tidbits, and offered a few glimpses into EVE’s possible future.

CCP has been working to stabilize a number of issues within the game related to the overall user experience. During the last few months they have overhauled the launcher, worked toward chat stabilization, and issues with missions started just before downtime failing to let users complete the missions to name a few. They have been and continue to be focused on delivering sound gameplay.

CCP has increased manpower on the anti-botting team and become far more aggressive on this front. It’s considered one of the primary issues associated with game imbalance. Over the last 30 days they have banned over 2,100 accounts and seized over 1 trillion ISK.

CCP understands they have quite a bit of gameplay that is bot-able. They will continue to review ways to make gameplay less bot-friendly with as little impact as possible to normal players.

CCP acknowledges there are some aspects of the game’s user experience that are less than optimal. Part of this improvement is Skills on Demand. Initial stats on the change showed an immediate adoption by half the experienced players and 60% of new players.

It seems CCP understands that making some parts of the game easier and more intuitive is better for the game.

The 64-bit client is slated for the second quarter of this year, with DirectX 12 to follow later. Both of these advances are slated to bring more stability and higher resolution graphics to the game.

CCP Fozzie talked about some of the changes and fixes to the War Declaration system. CCP has fixed a number of long-standing issues that were brought to light with the conflict in Perimeter.

The big announcement on this front was the removal of neutral assistance. As noted in the Dev Blog the April release will include this change. With this change, a neutral repper in a war would get a criminal flag and be CONCORDed.

In May, wars will have an even bigger overhaul. These include the addition of a ‘War HQ’ for the aggressors to provide defenders with a clear win scenario. The cost of War Decs will also be rebalanced along with UI changes to make the interaction with wars better.

Logi and Diminishing Returns, and Other Capital Changes

One of the biggest changes coming our way is logi repping. Diminishing returns will apply to all remote assistance. However, the devs primarily intend this change to impact Force Auxiliaries. Subcapital remote assistance should see minimal effect. This is an effort to move toward offensive versus defensive gameplay. The basic concept here is CCP believes that when ships die on both sides gameplay is more fun.  This change will affect remote armor repair, remote shield boosting and remote capacitor transmitting. This change scales with the strength of the remote assistance applied. This is an effort to reduce the impact on smaller ships and increase impact to FAX to a greater degree. CCP has taken precautions against counter rep nerfing. This will prevent dropping the rep effectiveness of FAX by bringing in a fleet of subcap reppers to counter rep.

The devs are also reducing capital ship insurance payouts. This, they hope, will make the loss more meaningful.

Carriers (super- and non-) will see their damage application on small targets nerfed. The fighter explosion radius and velocity will be reduced. Network Sensor Arrays will now prevent them from warping.

HAW titans will have damage reduced against smaller ships.

Once again, CCP is nerfing the Rorqual. Rorqual changes will be part of the April release. This may be the most nerfed ship in CCP history. Clearly not enough are dying. Excavator drone sizes will be increased so you can only save three in a Wetu. They are also reducing P.A.N.I.C. modules’ cycle time. CCP is moving the Rorqual, as much as they can, back to a command boosting ship with some enhancements on that front.

CCP plans to reduce the mining yield on Excavator drones by another 20%. At the same time the mining foreman boosting capabilities increase by about 20%.

The Vexor Navy Issue, Gila, and Ferox are all getting significant nerfs. 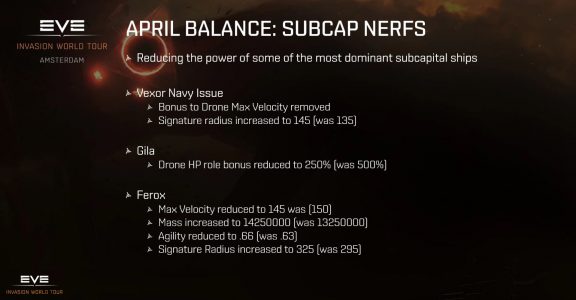 Along with the nerfs are a few buffs in the subcap range. 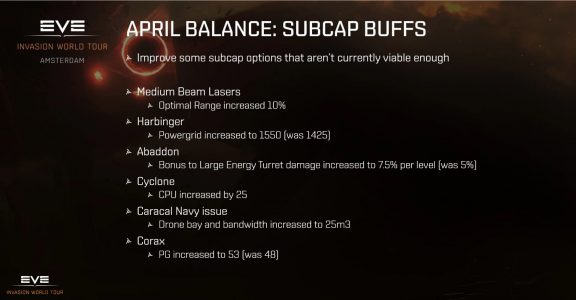 CCP Burger touched on the Triglavian changes in New Eden. We will get three new T2 ships this spring.  While details are still secret, below is a picture of the Ikitursa Heavy Assult Cruiser. The other two are the Nergal Assult Frigate and Draugur Command Destroyer. 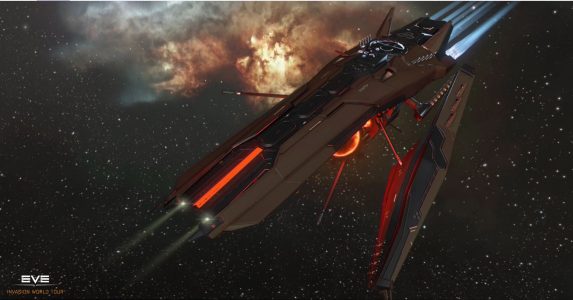 CCP has resumed their work on implants. Scheduled for the July Release, we’ll see new plant sets for almost all of the major pirate organizations, as well as changes to sets already in the game. One of these new/altered sets will be the long-awaited ‘Shield Slaves’, as the Slave set is moving from a bonus to armor HP into increasing shield HP. At the same time, the new ‘Amulet’ set will provide the boost to armor HP that Slaves give now. 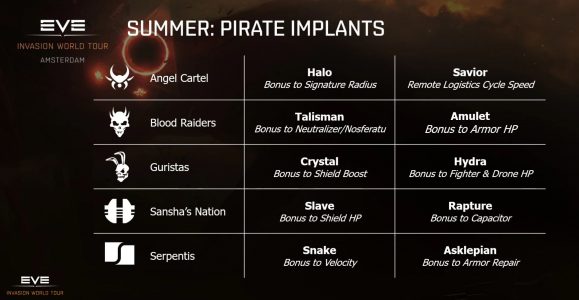 Along with the implant changes, capacitor and shield regeneration modules are getting some changes. CCP wants to move away from ships built ship around these modules. To that end, the individual performance of each module will improve, but ‘diminishing returns’ will apply. This will reduce the overpowered effect of fitting several and make combining multiple types of modules more effective.

Taken together, this likely points to a fair amount of change in the build of several types of ship currently in use, and raises some questions. What will become of the venerable ratting/missioning Drake? Will this push the logistics meta further toward cap chains? What effect will this have on capacitor emissions modules, if any? If so, how will the stacking penalties for cap transfers interact with this? We’ll know in July.

Changes to the UI and Game Visuals

CCP Burger showed some concept designs related to potential UI changes. The desire is to bring the UI to a place where CCP feels it would be. The desire is to integrate the UI into what we see on the screen. Hopefully, the lighting changes will bring out even more of the beauty of New Eden.

Another change coming will impact Jump Gates: the visualization of the jump itself. Small additions will include some visual reference based on regions along with adding the ship you are in.

In May there will be an update to links in-game. The example CCP Fozzie gave was linking to UI elements. There will be a new menu that will show all the linkable UI elements. Nothing is more frustrating than being a Bitter Vet telling a Newbie on comms where to go and what to do. They often have an issue finding where to click on things and words over comms just make everyone more frustrated. The crowd in attendance did not jump for joy with this announcement. However, this very well may be one of the more useful tools CCP gives players to help newbies in the game.

CCP is getting bolder again with changes. As painful as some of the nerfs may be they are needed. While we all like new ships it may be time to reduce the number of ships. The ship and module options in EVE has to hit a tipping point at some point where it weighs heavily on the art department.

The UI and user experience are in dire need of an upgrade. CCP is putting some time into this part of the game. While not quite completely old school text-based menus, it is a bit dated. Moving this into a more modern interface will make it easier for players to use.

One thing CCP has done resoundingly well over the years is to update the visuals in EVE Online to make it remain relevant. Quite often games need completely new versions released to get to the next level. Instead, CCP has done well to make us feel like we have a new game with these sorts of new designs. They may seem superficial to many but no new user likes to play games that look and feel old. To attract new users and keep the game fresh CCP needs to work on the UI and it looks like it is going in the right direction.