Devblog – Upwell 2.0 for february 13th details are up

This was announced back in Eve Vegas: Upwell 2.0 is coming with a load of changes to try and balance the Upwell family.  And today, Team Five-O gave us this huge dev blog with loads more details about the major changes coming on February 13th – yes, less than a month to go!

The devblog is constructed around the four major ‘pillars’ of Upwell Structures:

This is a monster dev blog, so fasten your seatbelts. If you just want a quick summary, take a quick look at the last section of this article.

Which is quite self-explanatory: service modules can either be active and consume fuel, and provide services… or not. A structure having at least one active service module is at “Full Power”. If not then the structure is, you probably guessed it, in a “Low Power” state.

The difference is that any  Low Power structure will see its defences significantly reduced compared to the Full power mode. This means less shield and more importantly, no armor (yep, you read it correctly: no armor, which means you shoot the shields and skip armor timer to go right to structure).

The Low Power state is, in addition, visible through the structure’s label, as shown on this picture: 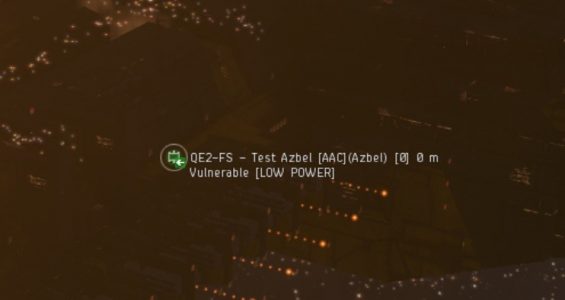 So this means that instead of setting a number of vulnerability windows for the structures, defenders will now set an armor vulnerability time window and choose a structure reinforcement day.

Further more, the attacker can get the information about the chosen timezone and day by scanning the structure using a relic or data analyzer module and solving a hacking puzzle , with the difficulty being linked to structure class (M, L, XL).

The 15 minute repair timer and damage cap are untouched.

Remember that if the structure is in low power state, the first reinforcement timer (armor) is skipped!

Depending on when the structure was attacked compared to it’s armor vulnerability time, the reinforcement cycle will last at least 22 hours, and up to 50 hours. A random factor is also added to this, which consists of taking the first vulnerability period that is at least 24 hours later and randomly adding (or subtracting) between zero and two hours.

This means that the attacker can pinpoint the armor vulnerability with a precision of four hours maximum before hitting the shields.
The armor timer itself is the 15 minute repair we all know.

The last timer is taken similarly by looking for the next structure vulnerability occurring X days after the armor is destroyed and adding/subtracting 0-2 hours, where X depends on the location (0.5 days, for WH, 2.5 for Low- and Null-sec and 5.5 days for Highsec).

So here, the defender chooses the exact date and a four hour time window.

Let us summarize all of this with this nice chart given to us by CCP: 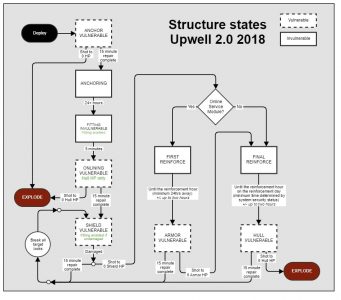 This will cover how structures actually behave in combat, and how to (hopefully) make them more enjoyable for everyone.

Similar to those of supercarriers, they include: AoE target painter, weapon disruptor, energy neutralization,  ECM jammer, sensor dampening, stasis webification, and warp disruption bubble effects. All these AoE burst have in-space effects showing off before being effective, allowing alert capsuleers to evade their devastating effects.

Along with those, the Titan’s Gravitational Transportation Field Oscillator superweapon is also given a Standup version. This weapon basically teleports all subcapital ships in the targeted area to a random spot in the same system. This module will be limited to Large and X-Large structures. Note that they can be used in all space!

A new family of fighters designed for structures will be created. These variants of the current fighter will be far more powerful but will only be available for Structures. For the industrialists amongst you, building these new Standup fighters will require a standard fighter plus approximately 25% more material value. As per usual with Standup modules, the blueprints for these will be seeded on the market from any Upwell Consortium station.

All fighters are getting a Standup variant, including the Sansha’s Nation Shadow heavy fighter, that will be purchased in BPC form from Sansha’s Nation LP stores. No skills are required for these fighters, and they will not be bonused by anything. Please note that Upwell Structures will not be able to use carrier-type fighters anymore!

As fighters get a more central place in structure gameplay, leaving the gunner seat will not abandon them anymore. Instead, they will gently disengage and try returning home.

To give more flexibility and options, CCP will add T2 variants to Standup modules. Along with that, more of the classic categories we know from ship fittings are brought over, such as capacitor power relays, capacitor batteries, and armor reinforcement modules.

This will be accompanied by a balance pass to fitting requirements: “Expect CPU and Powergrid decisions to matter much more after this release, especially if you wish to take advantage of the new T2 modules.”

As Structures will now be vulnerable 24/7,  the Standup warp scrambler and Standup stasis webifier will have a 30 second active duration, followed by a 1 minute reactivation delay. This cycle time is currently unconfirmed, but should prevent a structure from perma-tackling a target. A limit on the number of fitted tackle modules will also be added, at one per module type.

To give better engagement at long range, Structures will also see their lock range extended to 400km, giving a maximum possible range of 490km after rigs and module bonuses.

This was also announced at EVE Vegas, and is an addition to the Lifeblood feature set – the Moon Mining mechanics will be available in every part of Eve.

WH and Highsec moons will provide higher-yield mineral ore variants, as well as low quantities of the most common varieties of moongoo ores.

Some smaller change are added, and by smaller we just mean that they are not pillars, but remain worth noting, as you will see!

Some further addition that should come later this year:

Wrap-up and Things to Remember

First of all, before patch day, pre-set the reinforcement hour and day for your active structures.

This is done through the structure browser.

All changes should hit the Singularity test server, AKA Sisi, in the near future. Have a look and give feedback on the forums. If you already have questions or feedback, you can speak up in this thread.

To summarize the biggest changes:

And for the smaller ones: