At Eve Vegas, CCP released more information on the upcoming refineries, as well as structures a bit further down the line. The VOD can be found here.

The Life Blood expansion is coming on October 24, and as well as the refineries themselves, there is a whole lot of other stuff relating to moon mining (or, exogeology if you want to be technical). 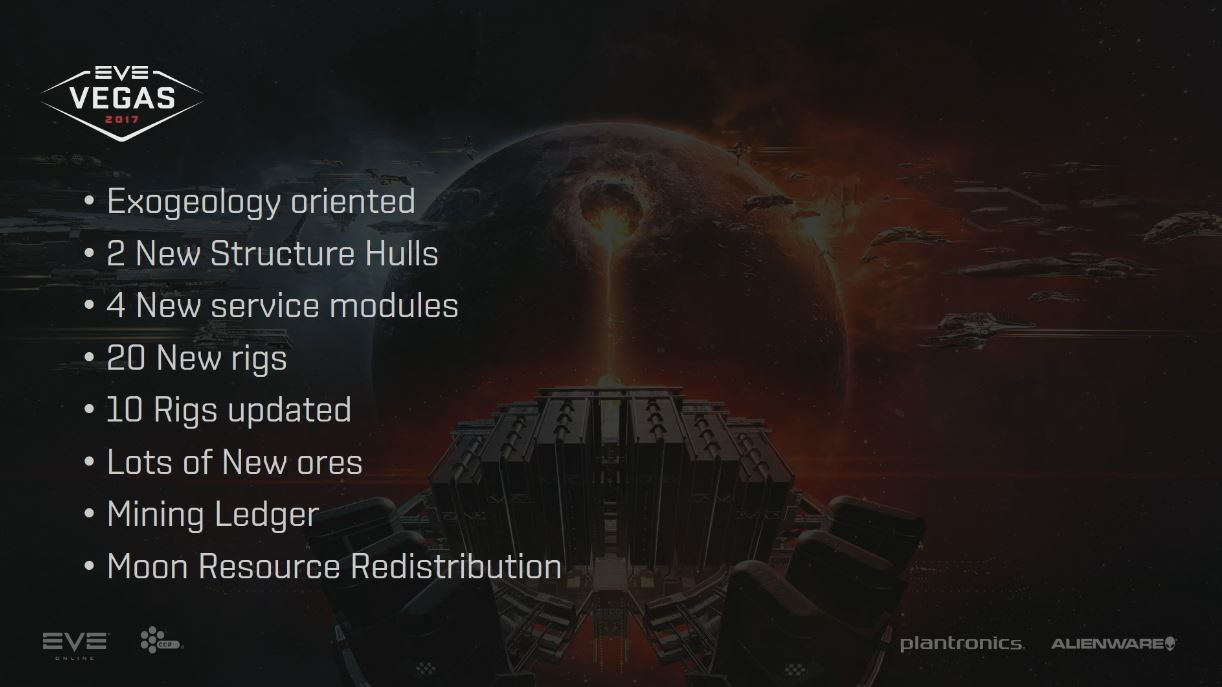 There are two refineries being released, the Athanor (medium) and Tatara (large). They each come with bonuses appropriate to moon mining activities and refining. 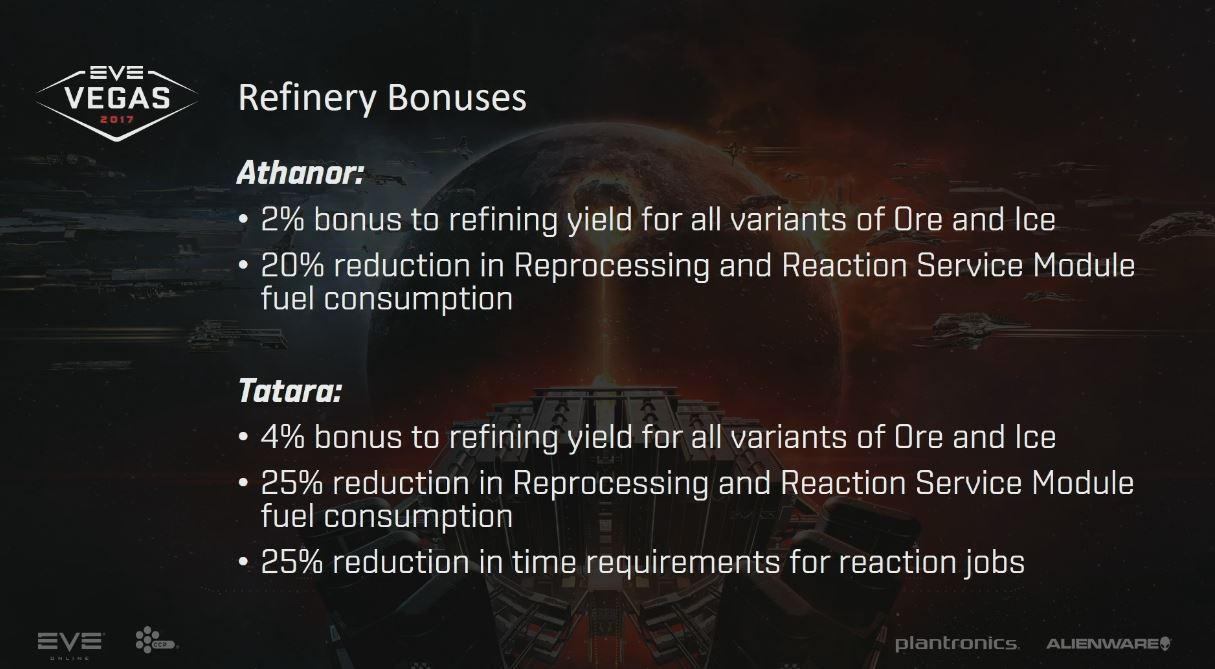 When refineries are released, reprocessing rigs will be reduced in effectivity, so that the refineries are better than the best current fitted refining citadels or engineering complexes.

The mining drills, as is already known from SiSi, can only be activated at one spot on a moon, and once in place they can be set up with a great deal of accuracy. Drill operation can be set up precisely for a 1 to 8 weeks duration or cycle. The minimum time, which is just shy of 7 days, allows for mining ops to be scheduled on a weekly basis.

The yield increases linearly in relation to time, so two weeks gives twice as much as one week, and so on.  More information was also given on the Jackpot yields. These are extremely high yield asteroid belts that spawn rarely from a moon.  You do not know until you explode the rock whether you have got a Jackpot or not, and if you have one, you will get a visually different explosion. The normal explosion is on the left in the image below, with the blue coloured Jackpot explosion on the right. 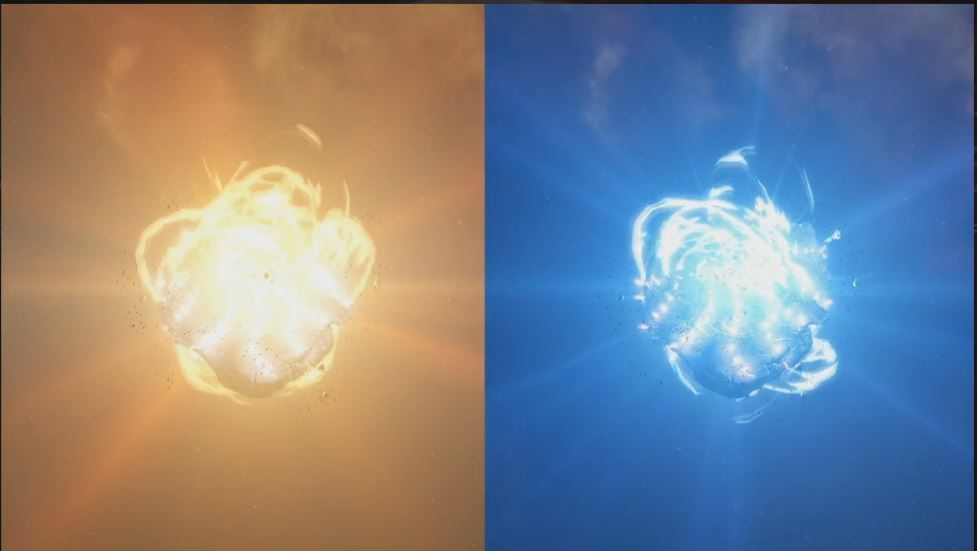 The jackpot ores will be 7-8 times as valuable as Crokite per m3, so will contain the most valuable ores in New Eden. They will also have a different graphic to normal ores, as can be seen from the image below, which moves in order of rarity from Ubiquitous ore on the right, to Exceptional on the left of the image. The top row is the normal ore, the bottom row is the equivalent Jackpot ore. Jackpot ores also have a different overview icon to the regular ores, ensuring that you can spot them easily if you happen upon an ore field which no one is mining.

As intrepid SiSi explorers will have already discovered, each moon ore contains one main moon material from the 20 available, with smaller amounts of another moon material, and normal minerals. There are two types apart from the Jackpot special edition. There is the standard variant and a +15% improved variation.  The Jackpot variant gives +100%.

The normal asteroids which appear from the moons (Veldspar, Scordite etc.) will have a 15% variant added to them as well, with CCP Fozzie hinting that this may be expanded later to other places than just moons.

Just as with the current moon mining, not all moons are equal, although all are now mineable. There will be a lot of moons with mostly regular ore in them.

There has been much fanfare around the randomisation of moon contents coming in Life Blood, with CCP even offering players the chance to name the random seed. During the presentation, however, it was revealed that R32 and R8 ores will have regional distributions.  The current distribution of these is roughly in line with proximity to pirate regions. CCP Fozzie stated that they are following something similar. They will be regionally distributed , but you will be able to get Technetium in the southern areas of New Eden although it will be mostly found in the northern regions.

The main changes for the moon distribution apart from the R32 and R8 is that 0.4 will now have proper moongoo, and lowsec and the higher sec regions of nullsec will have better distribution than at present.

To go hand in hand with the belts resulting from moon mining being available to everyone, the Corporate Mining Ledger will be introduced.  This will be available for viewing through the corporate API, and will allow for tracking of who is mining your belts.

Personal mining ledgers will also be implemented, to allow miners to track their own output.  This will be retroactive to July. 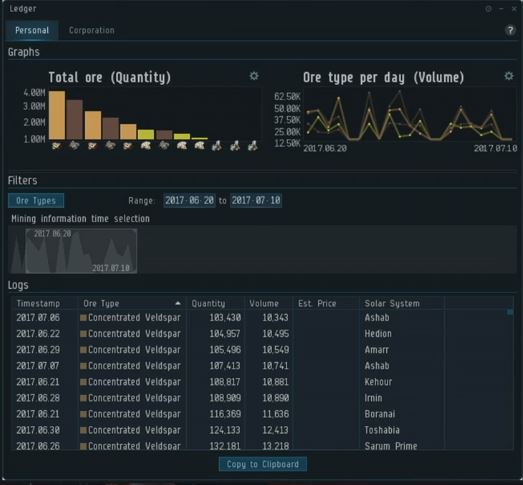 There will be two medium rigs available. The first rig makes mining easier, by making the belt last longer in space after exploding the asteroid, slowing the decay of the moon chunk, giving you more time to explode it, and making the belt more efficient to mine by putting the rocks closer together.  The second rig increase the yield you get from extraction.

The large rig will combine all the functions of the medium rigs.

Refining rigs will be reduced in power, but the coverage of each rig will be improved. Medium rigs will cover all ice, ore or moon ore, so with 3 refining rigs you can cover all the mineable items.

All currently fitted refining rigs will be unfitted on patch day and placed in Corporation deliveries. XL rigs will be converted into multiple rigs to compensate for the reduction in cost.

There will be 3 modules for carrying out reactions, the Composite Reactor for T2, the Hybrid Reactor for T3, and Biochemical Reactor for Boosters. Reactions will be done the same way industry is done now, with blueprints for formulas. There will be reaction rigs as well, similar to industrial rigs.  Full details will come in a devblog soon.

In Structures 2.0 early next year, W-space and 0.5 highsec will get moon mining. There will be more info as we get closer to the time, but for now it will just be standard ores.

Life Blood and Beyond: Structures 2.0

Moving on from Refineries, CCP Fozzie introduced on changes coming to Life Blood affecting all structures.  The one we all knew was coming is the additional 15-minute repair cycle after dropping a structure, before anchoring. Another quality of life change is that packaged ships will be able to be ejected from structure wrecks and containers, this makes looting these wrecks easier.

In the first quarter of 2018, Structures 2.0 will be introduced. There are some big changes coming here.

Active/Inactive State is a change which may go some way to helping people who wish to remove the citadel clutter currently destroying the otherwise beautiful vistas in some systems.

If a structure has a module online, it will be considered “active”. If a structure has no online modules (either because they have gone offline, or have never had any fitted), then it has lowered shield and armour resistances, and skips the armour reinforcement cycle. Tethering will remain at present in inactive structures, but may be removed in the future.

There is also a new reinforcement system coming in Structures 2.0. There has been some confusion about this, so I will try to explain it as best I understand it from the presentation.

The structure owner will select an hour (daily), and a day (weekly) as “Primetime”. This primetime will be discoverable by either hacking or show info, CCP have not decided yet. If they make it via hacking, they would send the owner a notification when it occurs.

This means that the attacker chooses when to attack the shield.  The armour timer, the day will be up to the attacker, but the time is decided by the defender (when they pick their primetime slots). The hull timer is at the date and time specified by the owner in their primetime schedule.

Please note, this could mean that if you pick a time to attack a structure just after it has had weekly primetime, and you are in a wormhole, then it will take a week to take the structure down.

So, if you are an attacker, make sure you pick your attack times wisely. If you are a defender, make sure that your weekly primetime is one that you can definitely defend, as it will be when the hull timer is.

CCP Fozzie mentioned a potential new weapon: the Gravitational Transportation Field Oscillator, which is currently available for titans, it teleports people elsewhere in the system. This weapon, if added to citadels, would be more powerful.

There will be new structure fighters as well, which will be able to be used for positional fighting.

This will now happen at an unspecified date in 2018.

The roadmap for structures was also shown. Stargates are the next structures that will come in, whilst advertising centres are being designed at the moment. The plan is likely to take “years and years” to get through.