Operation “Take Back Tama” A Success For The Gallente Militia

Gallente militia members all around rejoiced over the weekend as Tama once more belonged to the Federation. After a surprise attack, Caldari Militia had taken Tama a week earlier while most of the Galmil were in nullsec, enjoying a long-term “shore leave”. This led to Operation “Take Back Tama”, spearheaded by the Federation Uprising alliance.

Finally on Friday in the EU timezone, Galmil made the system vulnerable, and a joint strike force consisting of mainly Rapid Withdrawal [RDRAW] and Federation Uprising [FEDUP] destroyed the system’s Infrastructure Hub, with RDRAW bringing in their dreadnought fleet to attack the iHub and Federation Uprising overplexed the system, creating a buffer to make sure no Calmil forces would be able to interfere in time.

This conflict saw Tama become one of the most active systems in terms of fighting for the week that it occurred, far surpassing any systems below it. In just a week Aideron Robotics of Federation Uprising destroyed 358 ships, including some notable kills such as this Drake Navy Issue and this Curse

Also during this same time, FEDUP’s propaganda team was hard at work, creating works for the occasion such as: 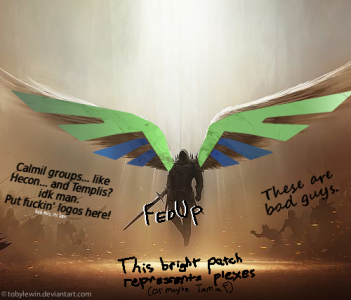 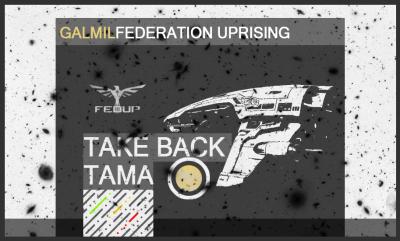 When asked for comment, Aideron Robotic’s CEO Ashterothi had this to say: “I would say that it is a testament to the growing coordination of the Gallente in EU the US timezone. We hope this will serve as an example of how Faction Warfare content is dynamic, exciting, and pretty much on call.”

Overall this conflict has been good for content in the faction warfare area of the game and has seen much attention on outlets such as on the EVE Reddit and various discord servers. After all the low-sec action, Galmil forces now return to Cloud Ring to watch over their nullsec properties as they wait for the Caldari Militia’s next strike.

AKA Casey Patterson. I'm a high school student who plays EVE as a sort of second job. Before EVE: Online I played EVE: Dust 514 for four years and am currently patiently awaiting Project Nova. I enjoy Classical Music and I play both the Piano and the Bassoon. I will be going into a US Marine Band in the future.