Among the Stars: Stellar Soloist

It’s a well-known truth that EVE is a social game. At any given time there are tens of thousands of people in space pursuing their interests and chasing their dreams. For some that dream is wealth, for others power, for a few just the joy of flying spaceships. Everyone has their love in this strange, at times dangerous, universe we call New Eden. And one common thread is how we need others. The most dedicated solo miner still needs people to buy his ore, and a lone wolf PvPer has to have targets.

I tell every new player to always do two things: career missions, for the free stuff,  and join a player run corporation. A corp run and filled by experienced players helps immensely by allowing the new guy to ask the inevitable “hey, guys, how…” questions and get a solid answer. It will let them grow so much faster as a player. But beyond that, it adds depth and life to your game. Mining fleets are more enjoyable than breaking rocks on your own. After all, where are the meme link wars when it’s just you? Solo PvP can even be social as you link kills in corp chat, laugh at near misses, or put on a playlist your CEO compiled.

The bottom line is that EVE is a game about people and spaceships, but primarily people. We drive the stories, such as the succession trials to replace a fallen Empress, and we write our own stories, one click at a time. But sadly, we can’t always be there for the big stuff. I flew in the Halloween War, participated in some of the hellcamps, ran scout duty on several ops for hours at a time. Then my wonderful wife and I had our first child, so my game time decreased. I flew in wormholes with a mercenary alliance, followed by a move halfway across the US. Time decreased again. I flew with the fleets burning Providence, had my second baby, a little girl, and you guessed it, time in EVE was pushed even further back. So now, I play during the hour around downtime, before I go to work, and for a bit in the evening. Not much, but it’s enjoyable. The sad part is the fact that I can’t keep my own advice and fly with people regularly, so I’ve had to learn to fly on my own, whether that means ratting in Deklein, or chasing people across wormholes in a Proteus. So this week’s article is about how to fly solo, yet still be able to make ISK and enjoy the game. This is a guide to running solo combat escalations, a good source of high sec ISK for a limited investment.

Anomalies are the sites on your scanner which show for as long as they exist. You can warp directly to them, no scanning involved, and they come in a few flavors. This will be about the Combat sites. Those are the ones where you warp in and slaughter wave after wave of pirate faction rats, as the NPC enemies are often called.

Combat in EVE is much easier if you understand tanking. An NPC faction deals a set damage type to you, to which you can tailor your shield or armor resists. The higher the damage resistance you have, the less damage you take. So when flying against Serpentis rats, which deal, on average, 55% Thermal and 45% Kinetic, you want to tank accordingly. Set up to resist Thermal and Kinetic, and forget about EM and Explosive, since they will never do that damage type to you. Each faction also has a damage type they are weak to, typically the primary type of damage they deal. So in our example, Serpentis would take more damage from Thermal, followed by Kinetic, EM, and Explosive in some assortment. Think about that when choosing your ships. Armor gives you better native EM and Thermal resists, while shield ships are higher for Kinetic and Explosive. Not to say a shield ship can’t be set up to tank EM damage, but it’s just a bit easier for armor. Same for an armor ship with Explosive damage. The other thing to think of is how to repair your barriers. An armor repairer or shield booster is required for a PvE tank, but don’t go crazy. Size it for your ship, and do enough fitting for 2-3 minutes of operation. Stable is overrated, since with enough dps, you won’t have to tank whole spawns worth of damage for more than that.

Speaking of damage, fit for as much as you can apply. A flight of heavy drones gives a lot of damage, but won’t apply it effectively to a wave full of frigates. Light drones give half the dps numbers, but will shred that same wave due to their higher speed and tracking. Does it seem like I enjoy drones? Yes, yes I do. My favorite fit for escalation exploration is the Vexor below: 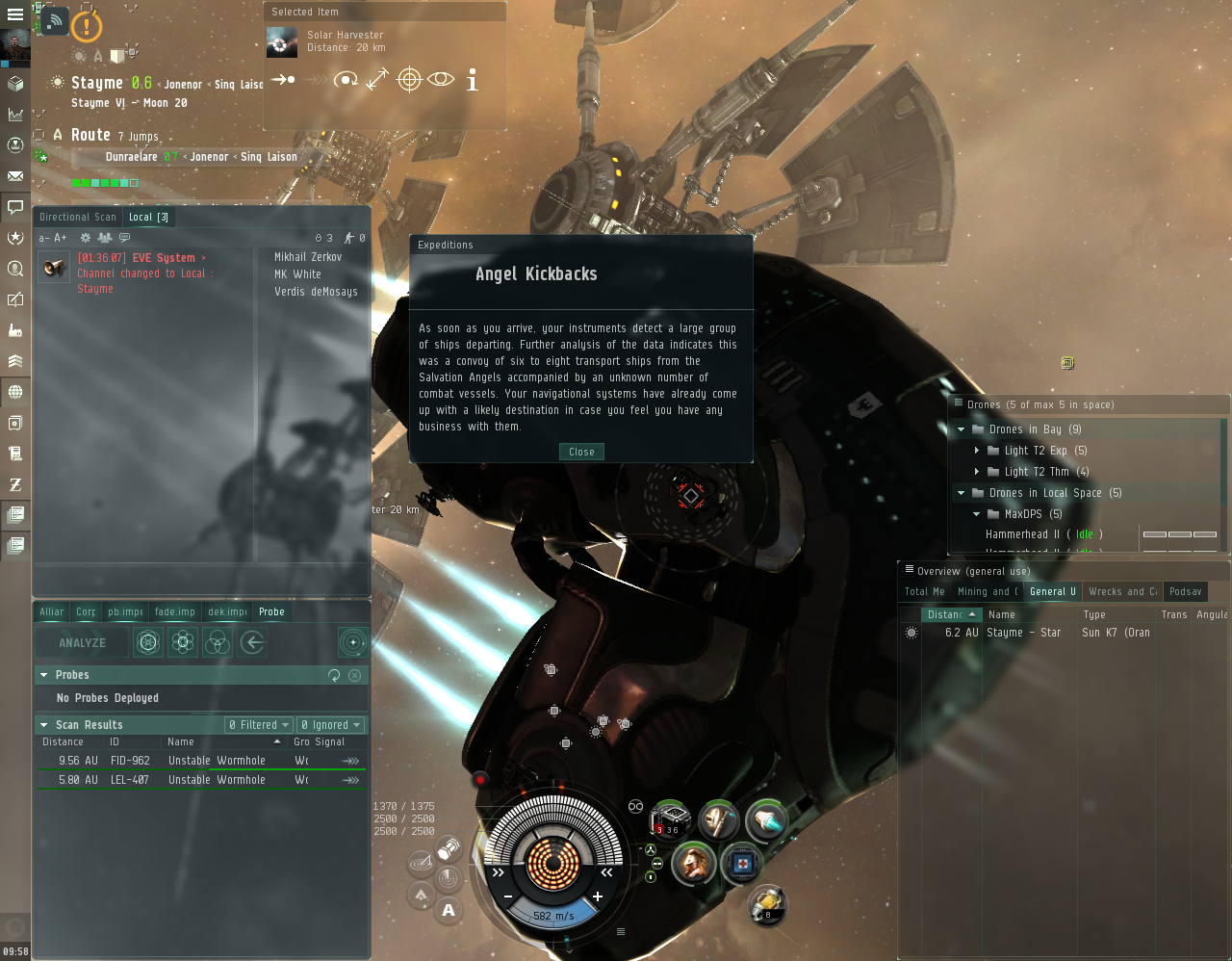 Note: the reason for the mixed drone sizes is to field the largest drones possible for the bandwidth. The Vexor has 75 Mbit/s, so this blend of drones lets you field a full flight of 5, and do the most damage possible, versus fielding just 3 heavy drones.

Total cost for this setup is about 45 million ISK, deals around 450 DPS with my solid skills, and can comfortably tank almost any highsec site I have found, provided you swap out hardeners for faction specific primary damage types. The fit is mostly T2, but still works fine with meta modules, and it has enough fitting PG/CPU left over that even if your fitting skills are low, you can still dial down to meta and be just fine. And as you get richer and better skilled, the same type of fit can be modified and apply to a Myrmidon or Stratios with equally good results. In fact, my Myrm fitting is the same except for having an extra repper, and whatever type of guns you feel like due to no weapon bonus.

HAVE SHIP, WILL TRAVEL

So now you have a ship, you have your probes, and you have a need for greed. Undock, bring up the probe scanner, and make sure you have the Anomalies and Cosmic Signatures boxes checked on your filter. Look at your system’s anomalies list to see if there are any combat ones present. If there are, check it against the this list to see if there are any that will escalate into complexes. Then just go and trash them. I usually warp in at 20-30km, and orbit something near the center of the anomaly with my afterburner on to help reduce incoming damage, since moving targets are usually harder to hit. There’s an explanation for that, but it involves tracking, velocity, signature radius, and a lot of math, so just take my word on it. While your drones and guns are working on the rats it’s a good time to open up your scanner map, deploy probes, and resolve any Signatures you have in system. If you get a combat site, look it up, see if you can handle it, then go run it if you want. Most scanned combat sites have a higher chance of faction spawns, and the sweet loot they drop, than anomalies. A faction spawn is easy to spot, since the name of their faction will usually be in the ship name. For example Dread Guristas rather than just Pith. Make sure you kill them fast, and loot them quickly. You can get faction modules and ammunition, implants, and even pirate ship blueprint copies from them. While they can spawn from any anomaly, they aren’t the only payout.

The real payoff is when a site escalates. When that happens, you will get a popup box on your screen with the name of the escalation, and a bit of story with it. Typically for highsec, they will be several sites in a row ending with a complex in lowsec. Each one has a guaranteed, or high chance, of a faction spawn. And each escalation site lasts 24 hours. It will disappear when the timer in your journal runs out, even if you’re in the middle of running it, so don’t wait too long. The loot can be very nice. My first foray out with the Escalator Vexor netted me a Mid Grade Snake Gamma implant, and a Daredevil frigate BPC. Sold the Snake for 62 million, and the BPC is competitively priced on the contract market for 53 million. Total of 115 million profit, all for the cost of an hour of running sites, 26 jumps, and a 45 million ISK ship. 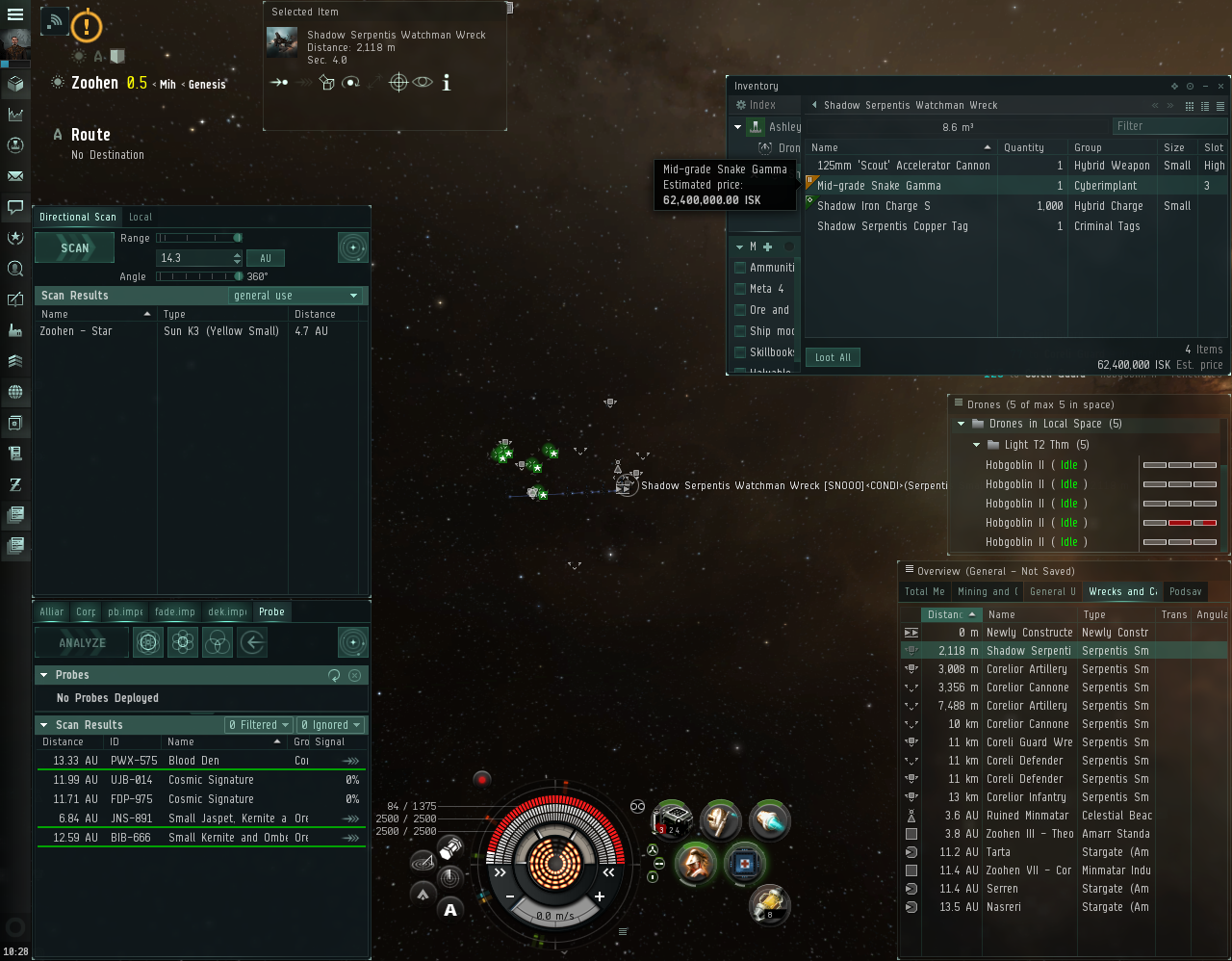 The lowsec part of the trip is the only part with real risk, but since your complex only spawns when you warp to it, the only way a person can find you is with combat probes. So make sure you have a directional scanner up when you run it, and if anyone is in system with you, set your scanner range to 5AU, and  click that scan button at least every 6 seconds. If you see combat probes on scan, bail out, dock up, and wait for them to leave. It’s more than possible to scan someone in 8 seconds, but most people won’t stick around for a long time to try and catch a Vexor, it’s just not worth it, when there are juicier targets out there.

This article is about flying on your own, but I couldn’t have done it without help. Credit goes to capsuleer Guristo Alba for the idea of writing an article about solo content for those of us who can’t always fly in fleets. Akemi Kiyoura also gets a mention for the suggestion of how to make 100 million ISK. Both were great suggestions, and they came together well in this guide showing how someone with moderate skills can make a good living in highsec on their own.

What will the next column be about? Write and tell me! I’m always available on Twitter @Verdis_deMosays, in game as Verdis deMosays, and here in the comments.

See you among the stars!

This article originally appeared on TheMittani.com, written by Verdis.