Some of you may or may not be aware of my in-game role in EVE Online as co-founder of the Sixth Empire alliance along with His Holiness Max Singularity, our beloved Spacepope. Some may be aware our alliance’s role is as the ‘Coastguards of New Eden’. Indeed, ‘Answer All Calls’ is our motto, and we do our best to help anyone who needs us. And so, as an alliance we have been aware of this developing situation and offering support as and where possible.

Following on from Rhivre’s excellent article a few days ago detailing the abusive practices of Yokai alliance CEO Sarra Somers, those involved with the investigation were already aware of a crucial Yokai citadel timer for midnight UTC, Sunday 13th August. Many people of every stripe, alliance and corporation in EVE had already expressed an interest in paying their, ‘ahem’ respects to this vulnerability timer in the way only EVE players can deliver in our cheerfully violent fashion in order to make it clear that although we may equally cheerfully gank, scam and stab each other in the back, some things are so far out of line that we will stomp very hard on anyone seen to be choking off the very lifeblood of this terrible game we love. That lifeblood is of course attracting and retaining new players, not exploiting them and driving them away never to return. It’s an ethos shared not just by my alliance, but by any other that strives to attract, retain and invest in our newbros. They are our future FCs, titan pilots, logi pilots, industrialists, and so on. Without them, EVE really would be dying!

Greygal posted some grim figures this morning on Discord. Apologies to her as she’s currently asleep and these numbers are still a bit rough and not in one of her wonderful graphs, but it does get the point across that this alliance isn’t normal.

OF ALL PERSONS WHO HAVE BEEN OR ARE NOW IN YOKAI:

A more in-depth count likely puts that number over 98%. That is, 97-98% of new players who were or are a member of Freedom Express are now inactive.

Cole Winfield, one the main people involved in this investigation, was very keen not to have this situation die down, but to keep the momentum going. He asked me for ideas, and as regular streamer and Sixth Empire member, ReloadGV, had mentioned in the comments on Rhivre’s article that he wanted to talk about it, I naturally put them in touch.

The Response from Yokai

The comments on the video vary, from supportive members of the EVE community, new players who had been alerted to his techniques, the escaped and grateful, and the confused and hoodwinked, to the apologists who don’t get the part about ‘I’m sorry but this really is NOT normal behaviour in a new player organisation’, to the delusional, ill-informed insanity of the man at the bottom of this whole mess. Sarra Somers himself: 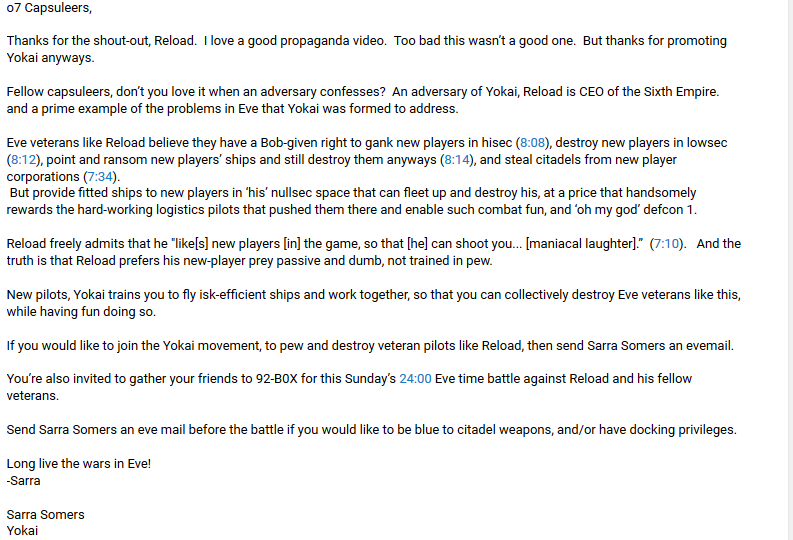 I have to say it has been some time since I’ve seen such blatant misquoting and misrepresentation, which is rather easy to spot if you actually watch the video. As for Reload being Sixth Empire CEO? I’d think the Spacepope and I would have noticed. We’re not fond of our alliance and valuable members like ReloadGV’s name being dragged through the dirt dishonestly. So, we, and the amazing people who alerted us to this mistreatment and exploitation of new players, thought that we would give the EVE community the opportunity to tell this scoundrel exactly what we think of him in the way we do best.

“Following on from the revolting conduct of Yokai and Sarra, there will be a fleet forming on Sunday night to end his reign of newbros abuse.

In case you weren’t aware, this is the guy whose corp demanded their new bros (some of whom were only 2 or 3 days old) go straight to null and spend $100 USD on skill injectors to get into bombers. Guess what? Both the bombers and injectors were on the local market at inflated prices. I think you where where I’m going with this….

If the newbros did not comply, Sarra Sommers locked them out of the citadel and/or kicked them from corp, leaving a day or two old player stranded in deep nullsec.

Analysis after the event has revealed that over 80% of Yokai’s new players have quit Eve, never to be seen again. These could have ended up as regulars to fleet up with, trade with or blow up! Sadly, they will never return

CCP did look at the incident to see if it breached the EULA (due to it being people blackmailed into borderline RMTing) We do not yet know the outcome. What we do know is that people have been driven out of the game forever by a scamming blackmailer who has gone a step too far.

To make things even worse, this fool has dared to drag the good name of Sixth Empire through the dirt in an attempt to deflect from his toxic conduct. As such, a fleet will be forming this Sunday night Eve time (when his citadel in 92-B0X in Great Wildlands is destructible) to punish Sarra and teach him that this conduct won’t be tolerated by the Eve community.

A large turnout is expected, so it could be a great fight as well as a way to show people who step over the line that the Eve community cares about our newbros, and we will exact rapid and severe vengeance on all who break that sacred duty we have to look after them and guide them into the game.

I invite and encourage anybody who can to show up and put an end to this reign of abuse. Form up is likely to be after 23:00 Eve time at a location to be announced closer to the time. Please be there and be the difference!

CEO of Amandla Legion and member of 6E”

A Call to Action

So my fellow capsuleers, this is in effect an EVE community CTA. We know some of you are at war, perhaps even with each other. This, however, is one of those times we forget our personal differences and band together to Wreck HIS Dreams and Build Theirs!