This morning, a tweet appeared on my feed from Greygal:

A leader in a small, new player alliance sent out a mail with this in it. Members overwhelmingly under 30 days old. What would you do? pic.twitter.com/TvwZULZSjH

The tweet contained a screenshot of a corp-wide eve mail, sent by an FC in Yokai Alliance, who are based out of Great Wildlands.  The FC in question was instructed to send the mail by the CEO of the Alliance after they lost a fight last night for a citadel timer. The CEO was quite irate about the loss, and told him what to write in the mail.

The evemail is as follows:

Yep, you read that right, they are asking pilots to pay $100 for PLEX to inject skills for stealth bombers.

This is the fit in the mail 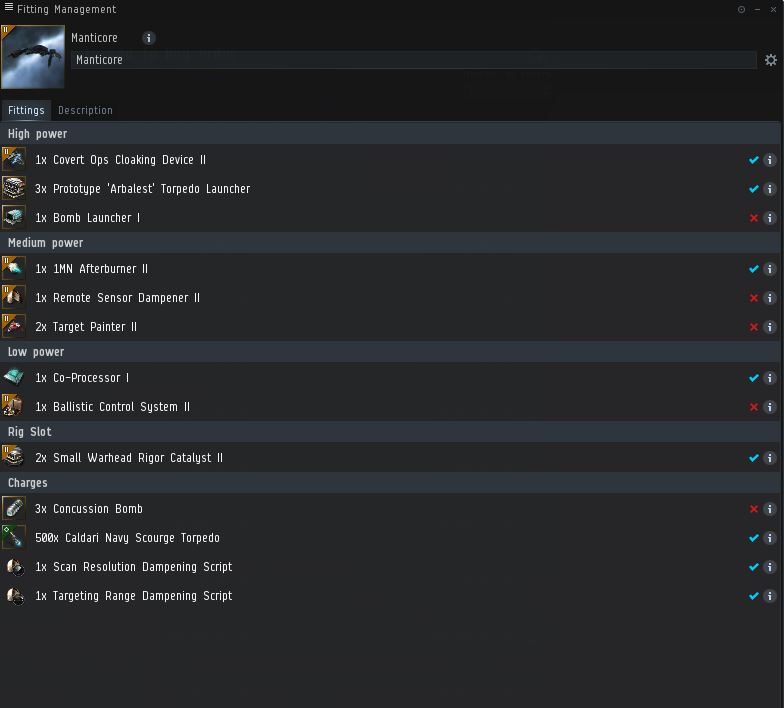 A Reddit thread sprang up shortly after the mail went out, with, as expected, a lot of discussion of the topic. The FC who sent the mail has been receiving angry Eve mails from people who did not realise it was at the request of his CEO.

Several people involved one way or another with this alliance have contacted me with information regarding them, and I have tried to lay it out as best as I can below.

The Alliance CEO has since sent an eve mail saying that the tone of the mail was wrong, and that the tone should be “of encouragement, not of force”.  There is no mention of the content being wrong however. 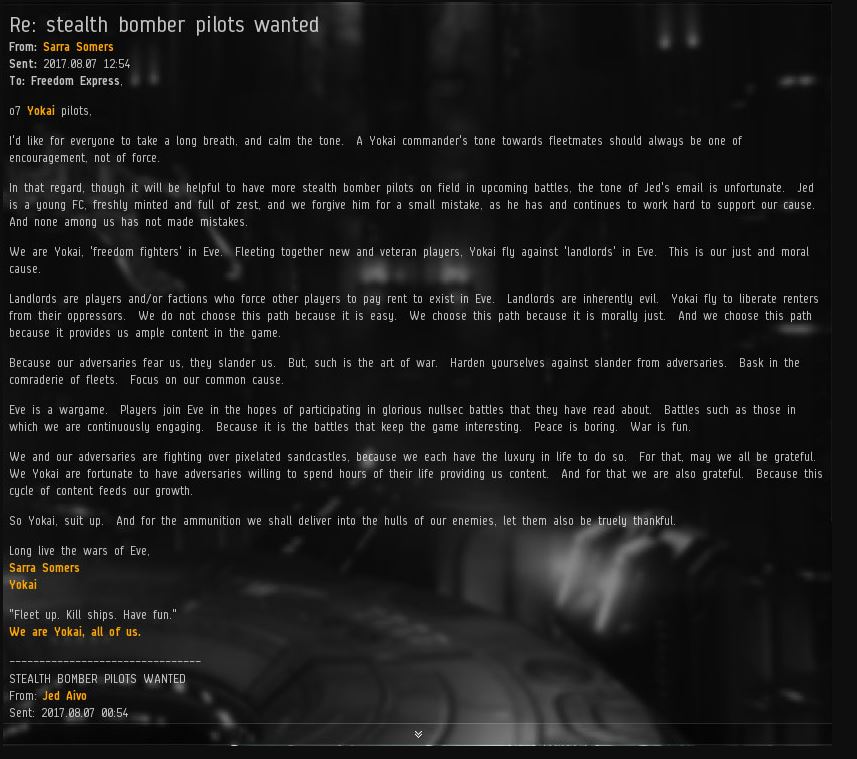 Quite outside of this, there are a number of red flags for new players who want to join this corporation or alliance.

The CEO sells ships on alliance contracts to members, which, is perfectly fine, many alliances do this.  Usually,  for new players at least, there is no massive markup on Jita prices.

I also do not think many nullsec alliances would sell ventures to their new players. 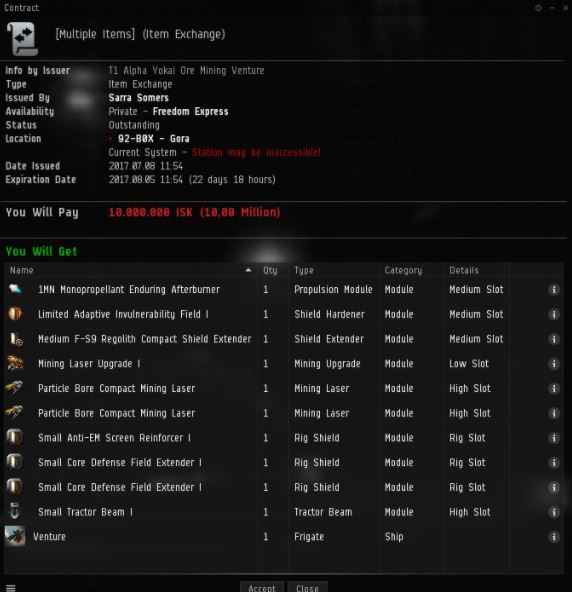 The current price of that in Jita is around 6m ISK, at the time the contract was posted, it was 4.9m ISK.

Mining in a venture in NPC null is not on anyone’s list of recommended ways for a new player to make ISK.

I spoke to someone who was previously a member of the corporation, and they told me that when they joined, they were instructed to go to Jita to buy a condor, then fly down to Great Wildlands. Upon arrival, they need to, of course, get some ships. They were told there was no market, but that they could buy contracts like the one linked above.

Other contracts available include this caracal: 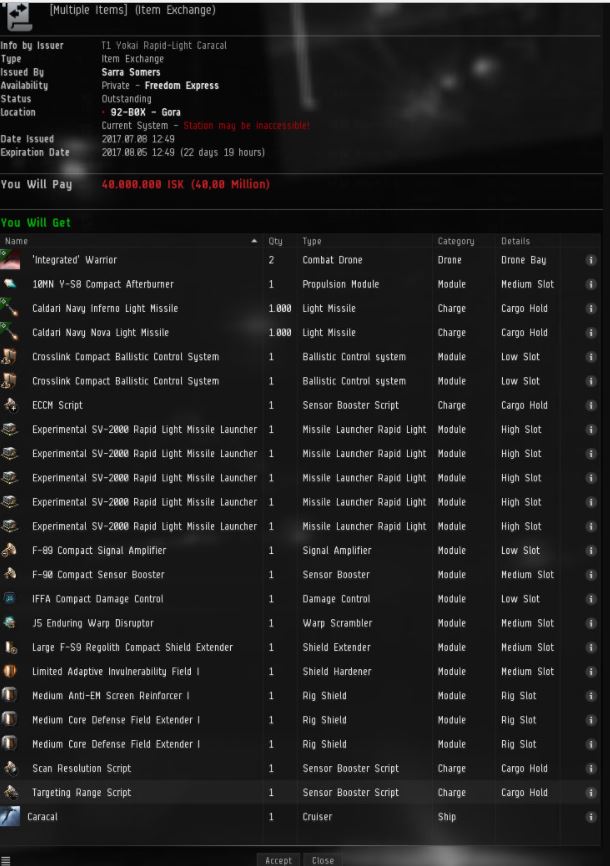 The current Jita price of the Caracal is 22m

For those more advanced players, there are Flycatcher contracts:

You will notice that these contracts all have the same name on them.  Whilst there are, of course, shipping fees involved in moving things to nullsec, they are not anywhere near a cost that would justify this markup to alliance members. Especially for T1 entry level ships. The cost for Jump Freightering a cruiser hull into 92-B0X from Jita is under a million ISK.

As we know, PvP can be an expensive business, and, when you are flying ships to defend alliance assets, many alliances will operate SRP to allow pilots to recover the costs of their ships. This can be especially helpful for new players. The following exchange took place between the CEO and a new player (under a month old) who had just lost a ship in a fight. The fight was for a “backup citadel” that only the CEO had access to.  The members were just given the instruction to “come and defend” without an on-grid FC to guide them.  The CEO had placed bubbles at the citadel, and, being new players, they didnt know how to work with them, so they just warped on grid and were killed when they hit the bubbbles. 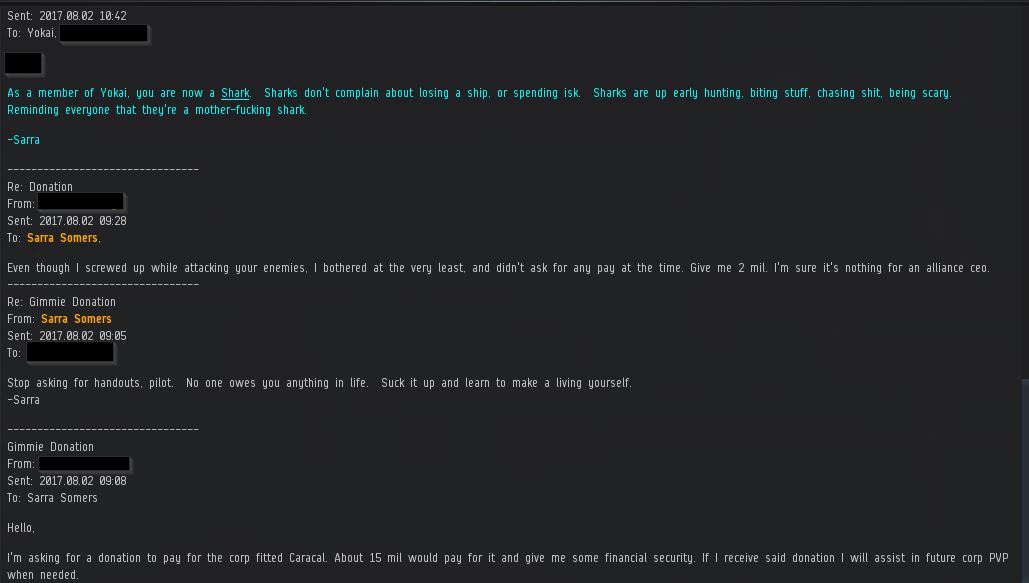 While it can be argued that the new player could have gone about asking for ISK slightly better, very few new player CEOs would respond like this. Most new player groups will provide free, or cheap ships for their new pilots. At the very least, they provide SRP, so that a new player is not bankrupted by the loss of a ship.  It says something about the assistance new players get, that this player thinks 15 million ISK provides him with some financial security.

This player would undoubtedly have been exponentially better off in any other new player group. Karmafleet, Pandemic Horde, Brave Newbies, Eve University to name just a few.

The CEO also has a flair for the dramatic.  After someone left the corporation, the individual still had access to the Discord server. Someone linked  The CEO responded to this by sending them an Eve mail titled “Illegal Unauthorized Access to a protected Yokai computer outside of the Eve game”

For reference, the United States Code they are referring to is this one, which, as far as I can tell (I am not a lawyer though), does not relate to Discord servers that your Eve corporation uses.  Protected computer also has a very specific meaning in legalese.

Greygal and Affirmative have been pointing refugees towards corporations that will take them in, and this has led the CEO to sell the situation to the members as Greygal trying to take down their alliance because she wants to take their space.  In NPC null of course, you do not own space.

A mail was sent to the alliance recently, telling them (in a whole lot of words) that how they were being treated was not how Eve treats its newbies, and that the Eve community does not like them being messed with like this.  The response from the CEO was to send a rather lengthy, pseudo legal jargon petition to CCP, claiming the author had violated the EULA by using “the Eve Community” in the mail, and could possibly have further violated it if people thought it was an official CCP mail. The petition closes with

Regardless of where your loyalties lie in Eve, one thing all of us agree on is that screwing over new players is detrimental to the game. It drives them away, and this is bad for the health of the game. Of course, it also gives us fewer targets as they never skill up and venture out into the cold depths of space. Eve is a harsh game, yes, and we are brutal to each other at times, but, we are also a family, and we look after our young.

Surely they deserve better than being mass convo’d in a rookie system, then either left to die in highsec in the midst of wars, or plunged into NPC null with an alliance like this.

The structure in the original mail is coming into timer at around 0000 tonight, and already a large number of players are planning to be there.  Hopefully, the new players who are in this alliance manage to get out, and find new families to welcome them with open arms and show them how we really treat new members of our family.  Older players who have bought into this setup for various reasons (friendship of the other players in the group is something I have heard several times) will also likely be looking for new homes. Let’s show these players how proper corporations and alliances treat their members.

Some of the alliance members may try and participate in attacking the citadel tonight, so hopefully they get a chance to do so, if they wish.

There are rumours of other activities which Sarra has within New Eden, including a wormhole corporation, and another citadel in Great Wildlands. As yet both of these are unconfirmed, but we will continue to take a look at them.

Special thanks goes to Cole Winfield, Greygal and the other people I have spoken to over the course of the day, as well as the people who have been putting in effort to find out what is going on. The Crimson Privateers have been taking in a lot of the ex-corp members, and it was their concerns that led to this all beginning.