I had too much left to do in Delve to leave with the move ops towards the front. I packed up the gas mining operations, relaxed with a few boosters, and enjoyed my evening. “Was it really Friday already?” I took one last look at our home (or so I thought), got in my favorite Crow, and started blazing towards Hakonen. At some point, I -will- exercise OP Security during this war, but I think by now the galaxy has taken note of the bee zerg force amassed in Lowsec.

Initially, my route was up through what was mostly quiet Culture space. Forty-something jumps, white knuckled in an interceptor. The space was nice, the people were quiet, there were no gate camps, and then it happened. I entered the J5A-IX system. As I entered I found there was something around fifty pilots all buzzing around the system. I gave them a nice pubbie greeting and transmitted nice system to local. What was supposed to be a quiet stroll towards forward operations took a rather sudden step back when I found myself once more looking at Delve staging.

That poor hooker. And I told her I would pay her when we arrived.

Well ok, that doesn’t happen often. Stroke of luck. I passed it off as a sacrifice to the war gods. I took one last look at our staging (or so I thought), I hopped into a FozzieClaw, and started making my way the opposite direction. Fifty-eight jumps through nullsec, lowsec, and empire space towards Hakonen. Now this trip, this trip would be the one. I was a bit late, but better late than never. I made my way most of the journey and then it happened, again. Onanam, another wonderful place to appease the war gods.

I arrived in the Hak just before the strat ops started going out. ” Be the hero the Imperium deserves. Join up today. Do your part. ” the propagoonda was already flowing, the morale was great, the bees were ready to swarm.

D-Day, the sirens sounded, SC’s and FC’s pinged out for troops to begin the fight with the enemy. As this journalist will tell you, the men were ready to start scrapping enemies long before the pings came. It was akin to sharks in chum filled water. We were ready to go. The two fleets left simultaneously, both with a clear goal in mind. The jackdaw fleet would do the heavy lifting, and the ‘cepter fleet would keep our enemies honest. As we were forming up in our groups in the Hak, an enemy Claw fleet was spotted near by. They landed on us, the FC furiously shouting and condemning a potato that fired near the station. Goons may have forgotten what lowsec is like. We lost a few, but ultimately, Darwinism must prevail.

Jump after jump, we watched the Claw fleet.

Slowly pushing them further and further away from the Yackdaw Op. Their sabre was moving with the group, endlessly trying to bubble the main force, but each step closer he came to trapping the Jackdaws was one step closer he came to our wrath. Finally, fate spoke and we caught him. Minus one Sabre. We anchored in the system, star bursting, making pings, our FC was on it, casually warping us to and fro as our ‘cepters played fuck fuck games with the enemy fleets. We killed a few here and there but it was nothing like the destruction the enemy faced when we stopped playing around. 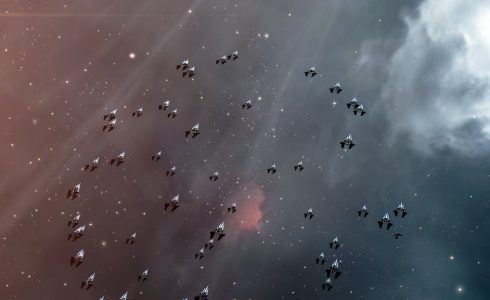 The true fight started with a Moa Fleet and the Yackdaws.

We were sent intel that a Moa fleet was rapidly closing and about to come through the gate we were perched over. The true heroes were those bees who didn’t care about the kills, just kept making perches. The fight had started, the Moas crashed through and found themselves bubbled on our side of the gate. The Jackdaws anchored up and formed a spear of missile-spewing doom. Our FC kept his head calm and warped the fleet into the Jackdaws, as we single volleyed targets off grid, then warped back to our perch. Thus it went for twenty minutes. The jackdaws brawled it out, and we headshot their FC’s and those of note.

After the Moa fleet littered the battlefield we found ourselves reloading and taking note of the damage we inflicted and laughing about the fleet we just melted. Then something unexpected landed right in our laps, four Machariels landed on grid very near to one of our perches, and they were clearly a trap. Would we bite? Damn right we would. Buy the ticket, take the ride. Our FC warped us right on top of them, and the smart bombs started eating our Claws, but very quickly we were orbiting them at ten thousand just outside of their range. The Machs went down quickly. Twenty-five Claws for a two billion ISK Mach? Sure. We’ll bite.

As we jumped back to the gate to try and catch whatever we could, a familiar face I’m told happened to crash through our gate and was instantly tackled. Though there were other enemies on grid near us, the Tengu was very clearly our target. Our FC shouted through comms “Burn him.” And we obliged.

D-Day still isn’t over at the time of writing this article and already our enemies know fear. Already they have felt loss. We will not relent, we will not go easy. I asked the men around camp late into the day how they feel about our operations. Great, a resounding great, is what I can glean from most. We do need things out here, they also say this is a great time for little bees who are interested in business and markets to put a few things up here and there, the Hak is a great opportunity for all.

This is Johnny Crowe from the war zone signing out, give em’ hell boys!