This is the next in a series looking at the past six months World War Bee. In Part 1 I covered who the main actors were in our first piece, as well as some of the complex history between the groups. In this article we will look at other elements of the current war between The Imperium and PAPI. So let us start with looking at how World War Bee ramped up.

The NIP Has Slipped

The more powerful alliances and coalitions commonly form diplomatic agreements. These come in a variety of flavours, with all the legalese you would expect. Non-Invasion Pacts (NIPS) and Non-Aggression Pacts (NAPS) act as the basis of such agreements, but they can also extend to commercial ventures. How each party handles their side of such agreements can have a long lasting impact. Groups that violate agreements develop a poor reputation.

The Imperium had no interest in expanding its borders, as it has had more space than it required. The economic miracle enacted by the Imperium over the past years occurred through player density and co-operation rather than accumulating vast territory. But in order to secure borders in the south the Imperium made an agreement with The Legacy, an agreement the Imperium honored, sometimes to its detriment.

On the 21st of June 2020, The Legacy coalition formally advised the Imperium that they would be breaking the Non Invasion Pact (NIP) in two weeks.. You can read the declaration from Vily and some brief analysis and reaction here. In short order, The Mittani, leader of The Imperium, gave a response. The Mittani finishes his own statement with “We will be outnumbered, we will lose titans, we will lose Keepstars, but no one can fight a war of annihilation quite like us – and at a fundamental level, no one enjoys it quite like we do.”

Such agreements always have some ambiguity woven into the framework. In this instance you have to consider the question of whether the NIP was actually broken. The Imperium contend that rallying a mega-coalition, before the NIP ended, in order to attack the Imperium is very much breaking the agreement. Lining up your troops on the border and securing allies to attack is not a passive act. Therefore, the Imperium sees The Legacy move as a back-stab. You can decide for yourself.

Every “good”, “true” and “just” war needs powerful narratives to maximize the attendance. Some people just love to fight and need no excuse; but line members require more than that. They need ideals, such as “fighting for our homes” or “crushing our oppressors.” Ideally, a coalition leader would like to hit as many touch points as possible when rallying the troops for war. Phrases like “toxic leadership,” “annihilation,” and “extermination” were all used by PAPI (an sobriquet that has stuck). The casus belli has to be appealing, for the more bodies you can throw at the problem the greater your chances of success.

Vily and Progodlegend have been the loudest voices in PAPI leadership. Other leaders have been less vocal, with some avoiding the limelight altogether. So, for the first months of World War Bee we can only assume that the other leaders were content for Vily and Piggles to speak on their behalf given their silence. Silence is tacit acceptance.

With the messaging we have perhaps seen the greatest mistake of this war (though M2 was a doozy). For some unknown reason Vily started the war using language such as “For us, this is a war of extermination.” He goes on to make other outlandish claims, such as stopping “goons” from playing the game. Progodlegend was also using similar phrases and so was affirming Vily’s remarks.

With these early and outlandish victory conditions,  the Imperium was given a gift. In these very public statements (the “extermination” phrase comes from Polygon, the 4th largest gaming magazine with a large international readership. Vily had set the conditions for victory so high that they were now unobtainable, a fantasy. The Imperium was fighting a defensive war and this made their messaging simple: “We fight to survive and NPC Delve awaits.” While what counts as Delve proper may have shifted some, the win conditions – survive – have remained remarkably fixed.

As the war has continued over the months, the initial PAPI win condition – “extermination” – began to change, creating a split in the victory conditions messaging was seen from PAPI. Pandemic Horde (PH) did not share the same view as The Legacy. The PH view was that they were invading Imperium space to cause significant financial harm to the Imperium, in order to negate the economic advantage Imperium had gained over the recent years. PH wanted to level the playing field through war, rather than through mining and industry. There was also an element of revenge involved, given the history between the Imperium and PanFam as I discussed in Part 1 of this series.

Meanwhile, Winter Coalition leaders were still very quiet about World War Bee. Whenever I enquired about the position of the Winter Coalition vis a vis the war,  I was met with more hostility to AoM or TAPI than the Imperium. The same hostility is generally true of the FI.RE coalition, although they probably only see this war as good business in the future.

With the casus belli of PAPI very loosely established, let’s look at some data to further examine the PAPI claim that the Imperium was, prior to the conflict, controlling too much space and had gotten too big.

There are a variety of sources that are available when it comes to meaningful numbers in New Eden and its nullsec blocs. Unfortunately, they all suffer from weaknesses and are inherently difficult to track. Therefore, I will deliberately “stack” numbers to make The Imperium look as “evil” as possible. Perhaps this will make the comments section easier to handle, when zealots start arguing about a 500-person alliance, that no one has ever heard of, has been missed in the data.

I primarily use Dotlan here. Some will argue that zkillboard should be used to show active combat characters. The problem with that technique is that there are many wartime roles that will never see a character enter combat. It’s important in war to mine and to build ships, but those pilots don’t appear on zkillboard. Additionally, many alliances will have some of their characters in other alliances for the sake of appearances. Finally, with the disparity of numbers on the respective sides we have also seen asymmetrical warfare. Nonetheless, with these caveats, data can still tell us something about the respective sides.

Data has been taken from Dotlan for the respective alliances at two points. The first date used is July 1, 2020, as by then all of the main participants are well defined and active on a war footing. The second date used is January 1, 2021. Do note that there are many alliances missing, especially from the PAPI side. The top alliances by activity/member count have been used as a basis to show the general shape of data. By all means feel free to add, remove or even swap as you see fit. 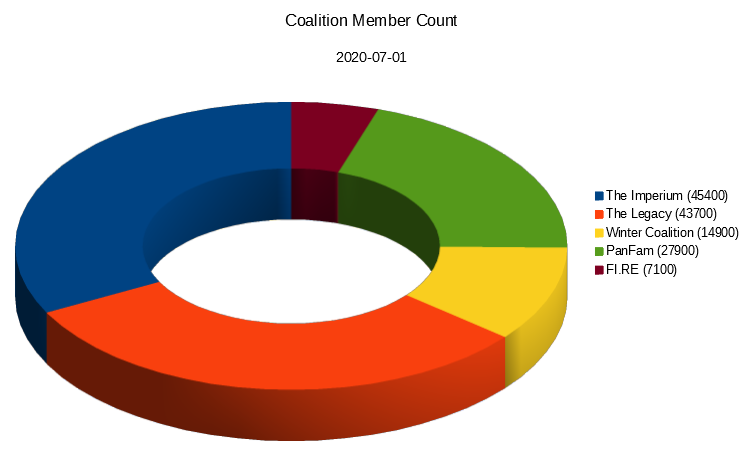 So, with the warring factions out of the way, what are they fighting over? The space being fought over in World War Bee is called “Outlaw,.” But this is only a fraction of the space in New Eden as a whole. The following graph shows how “Outlaw” space stacks up against other kinds of space. 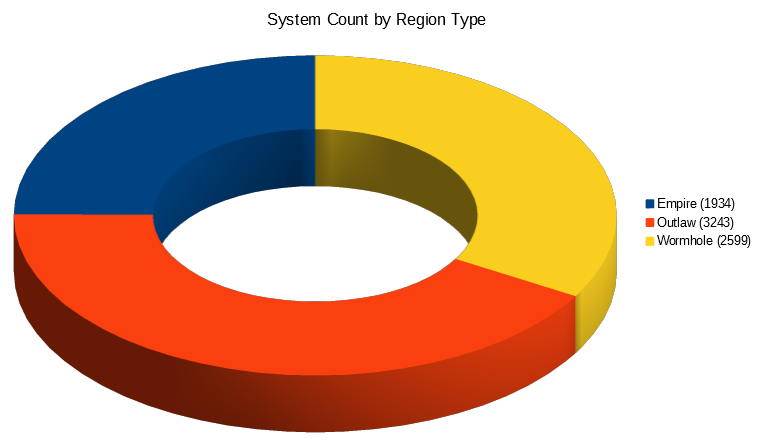 Again, Dotlan is the source of this information. There are 40 regions in “Outlaw” space, more commonly known as nullsec. Two are NPC controlled and the rest are up for grabs by player owned groups. So how does this relate to coalition ownership of Nullsec, who really are the big players here? 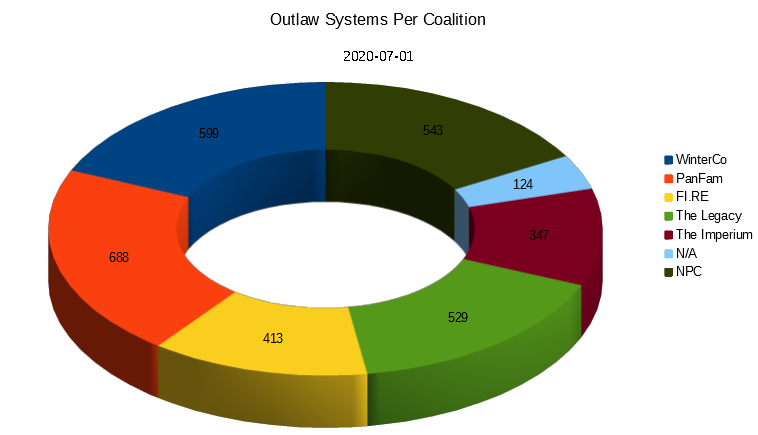 Now that we know how many players there are, roughly, for each coalition and how much space they have, we can do some more math and work out who is using their space efficiently and who is not. This is simply a matter of taking the coalition member count and dividing it by the number of systems they have influence over. The higher the number, the more people live in that space, which is generally considered good by all.

In the last installment, I will cover the losses for each coalition and then recap, month by month, some of the major events of World War Bee so far.