EVE developer CCP served up two portions of ‘chaos’ and one new out-of-game resource in the last week. These announcements, momentous in their own right, might have been overlooked as players in CCP’s ‘Chaos Era’ increasingly view major changes as, well, rather mundane. In case you missed them, here are the week’s developer updates.

CCP announced major changes to the way capital and industrial ships travel in an August 14 post on the official forums, and INN reported initial reactions. Whereas previously the standard Cynosural Field Generator module could fit on any ship, including the starter corvette available for free in any NPC station, it will now be limited to Force Recon Ships and Black Ops Battleships, the latter of which will receive a 50% cyno duration role bonus. CCP’s original plan included a new ability for Jump Freighters to jump to Covert Cynosural Fields, which can only be produced by ships that are covert ops-capable.

The first round of changes to cyno mechanics provoked a wide range of strong opinions. A panel on Talking in Stations five days after the initial announcement pointed out many potential problems balanced against few benefits. Low-sec and wormhole panellists expressed interest in the changes, believing they will allow small groups to seek fights without inviting an instantaneous capital response. Nullsec panellists asserted the changes are too restrictive and may stifle Sov warfare, PvE activities, and overall player engagement.

CSM 13 member and INIT pilot Brisc Rubal summarised in the interview: “I don’t think any of us disagree that we want the game to be hard and we want to change the risk-reward balance so that there’s more risk but there’s also more reward because that makes it fun. But so far everything that I have seen [in the Chaos Era] – with the possible exception of the blackout – the Drifters and the cyno changes and the rest… it hasn’t made EVE harder, it’s just made it more inconvenient. And that’s not fun.”

In an August 26 update to the original forum post, CCP withdrew its original plan for Jump Freighters to utilise Covert Cynosural Fields after reviewing player feedback. Instead, a new module called the Industrial Cyno will be introduced to provide Jump Freighters with a less demanding cyno option. The new module can be fitted on T1 (Tech 1) industrial ships such as the cheap and relatively agile Nereus and Wreathe, each of which has five low slots for Inertial Stabilisers, Nanofiber Internal Structures, and Warp Core Stabilisers to make them harder to catch.

Developer CCP Rise indicated that one motivation to detach the Jump Freighter’s cyno capabilities from the expensive ships required for the standard cyno, as well as the high skillpoint requirement to use covert cynos, was to allow players to continue holding ‘cyno vigils,’ which are generally spontaneous events in which large numbers of players light cynos in space to commemorate the passing of a fellow player or a person of significance to space research. However, as with all ‘Chaos Era’ changes, the introduction of the Industrial Cyno invites controversy. The new capability essentially preserves the perceived problems with the old cyno mechanics – chief among them the use of cheap, throwaway cyno ships to enable low-cost and low-risk capital transportation – but only for Jump Freighters. Given that cyno modules are only usable outside of high-sec, this move may not reinforce CCP’s insistence that EVE should be more dangerous for veteran players.

The cyno changes are scheduled for release in September.

An August 28 developer blog shared the welcome news that EVE Vegas 2019 will feature a reunion performance by Permaband, including the former CCP Guard, who left the developer earlier this year. Veteran players who remember Guard’s commitment to engaging players in CCP’s vision for EVE will undoubtedly appreciate this reprise of CCP’s popular musical act.

However, after dangling the sweet, crunchy carrot of Permaband before our very eyes, CCP announced near the bottom of the blog that official North American events in 2020 will not include Las Vegas as a destination. Historically one of the most popular EVE gatherings, EVE Vegas has become a fixture of the game’s social calendar and will be keenly missed. Indeed, The Imperium’s leader The Mittani declared that a Goonswarm-led event will be organised in Las Vegas next year to fill the void created by CCP’s withdrawal from the venue.

CCP’s original EVE Online Portal app, a much-maligned tool for tracking character progress, checking in-game mails, and staying connected to the game while away from a computer, has been replaced by EVE Portal 2019. The new app allows users to link EVE accounts and characters with the same sign-in information used by the game launcher. The home screen displays EVE time, current skill training, announcements from the game launcher, the most recent in-game mails, and links to Skills, the New Eden Store, Mail, and an additional menu to switch characters or view a condensed version of the game’s Character Sheet. While these capabilities are similar to those offered by popular third-party apps such as Neocom II, EVE Portal 2019 actually allows players to make adjustments to their skill queue without logging in to the game – a useful tool for players facing lengthy periods away from the game to make changes to their characters’ development. The mobile New Eden Store allows players to purchase ship SKINs and apparel, although PLEX still must be purchased through the PLEX store and is not available through the app. 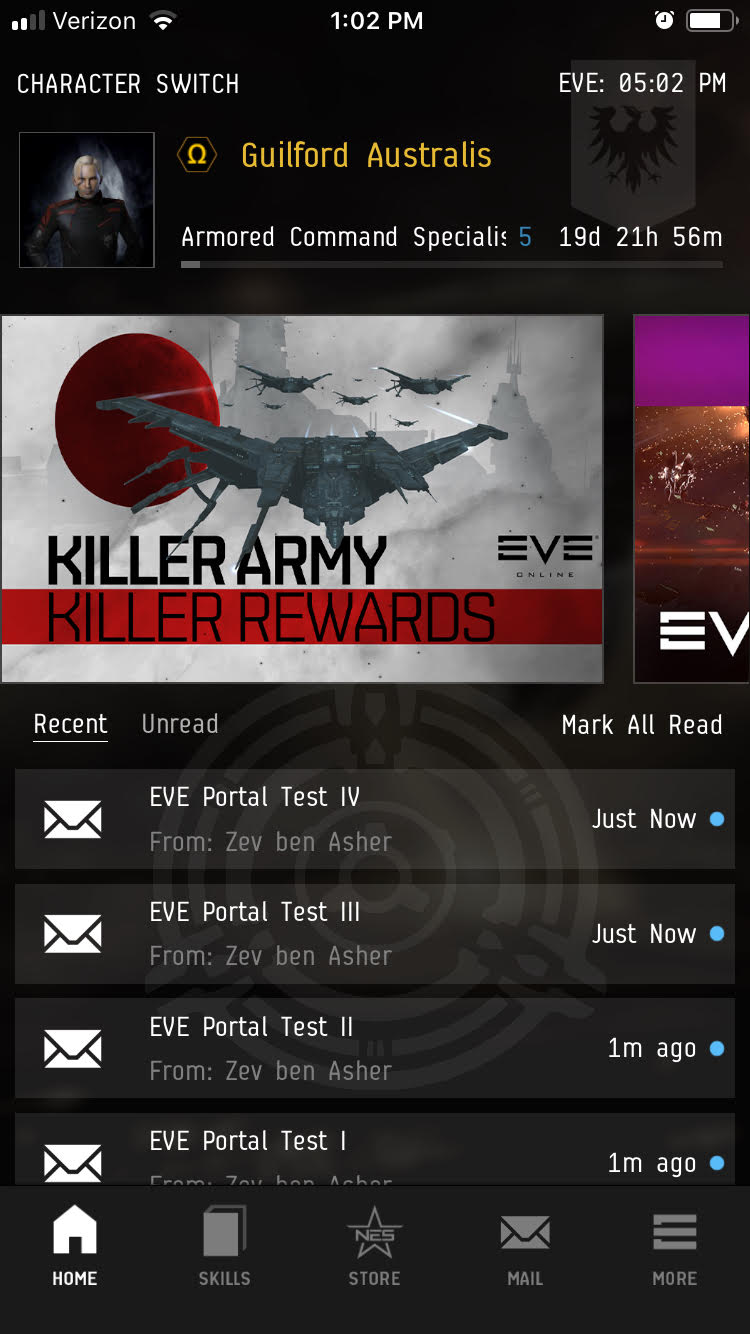 With the updated appearance, layout, and capabilities, EVE Portal 2019 is a powerful out-of-game resource and a worthy companion to the game itself – with a couple of asterisks. First, due to the app’s use of the Unreal 4 engine, older phones may not support it. This problem appears to affect newer phones, as well. Users of some Android 9 devices – which CCP says are compatible – report that they cannot use the app. Additionally, some features do not consistently pull data from in-game. The Character Sheet does not always display ISK and PLEX balances, jump clones, or implants. Nevertheless, EVE Portal 2019 is an admirable improvement upon CCP’s earlier efforts, and with the proper support it may become the most popular option for managing accounts outside of the game. 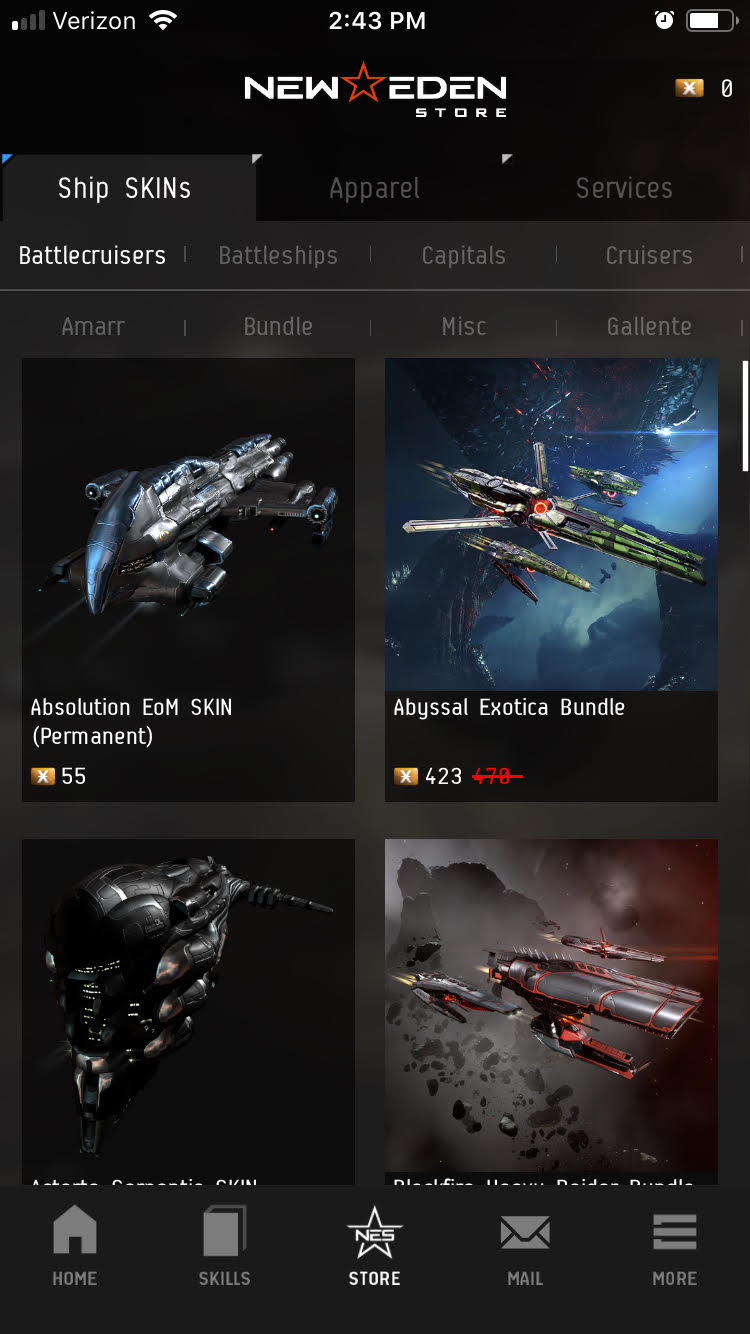 Editors Note: An earlier version of this article suggested the Industrial Cyno can be fitted to a Venture, this is incorrect, and has been corrected.

I sent 70 men to Feythabolis that day. We never found them. Just the Jackdaws... floating, empty. The wormhole took them.