After CCP’s decision to shut down API scammers, TMC was approached by Jeanne Louise, who, in Harry Potter parlance, had ‘Solemnly sworn he was up to no good’ to make himself filthy rich. He reached out to TMC in order to explain the methods he and his compatriots used to empty the wallets of the credulous and those foolish enough to fall for one of the oldest scams in the game: ‘ISK doubling.’ I’m sure we’ve all seen this scam at trade hubs!

Jeanne Louise: First, thanks for you contacting me [back], and sorry for my bad English! I’m doing this so new EVE players can see what the scam was about, because they won’t see it ever again.

JL: Well , we did not scam the most amount of ISK of all times, but we did make a scam banned by CCP in less than a year.

TMC: You must have been very good at it?

JL: Well, I did the site for myself at first, but soon people wanted to work for me like opponent sites did.

TMC: ISK scams have been around quite a while, though?

JL: This kind of scam is 4-5 years old, I think. As for my story, I started EVE in September 2014 (I did a trial without success one year earlier). I started scamming by October 2014

JL: I never paid for an account after that. At first, my website was a pixel-copy of eveapi.com, and I managed to get all the workers from the site to come to mine.  So in few months, the site got exclusivity on EVE wallet scam in hubs; the eveapi.com people were still running “roaming” scams in systems. My site was “cheap.”

JL: Workers only paid 20% of what they have taken. Other’s sites were 25% at least + setup fees (for new worker or hub change).

JL: Yep. Up to 30 characters worked for me since February

TMC: Quite something, I have to say.

JL: I don’t have earlier stats. I wrote the v2 with automatic billing in February, but you can basically see the potential of the website. 1937 people sent over 50 million ISK (the minimum amount) since February, for a total of 578 billion ISK — almost 300m per person on average. That’s not a lot, but for a “newbie” like me, 20% of that is 100b in less than a year without even connecting for months some times.

TMC: There was a ‘Server error’ thing as well? I’ve heard of this. Is this where people ‘think they sent ISK’ and you can’t find a record of it apparently?

JL: Some workers used this technique to get more ISK. People could send 4 times over 2b in 10minutes because “we didn’t receive the ISKs and when the guy ask why there is an outgoing transaction on wallet (fake) API, they were told there was an error since the API can’t lie ,but I wasn’t really ok with that. Those are isolated acts, but those scammers were able to get more and more from these guys, so they never stopped using this technique. That’s why CCP got pissed off. Marks thought it was CCP or API problems, not about they were dumb enough to be scammed.

TMC: How do you fake API data?

JL: Basically, the site fetches real API information, adds fake outgoing lines, then displays information to the client. My site also had a full wallet editor. It can add / remove / edit any line, so, if scammer is 100% AFK, the site create outgoing lines without any action required. Scammers also like to edit reasons from received amount, and fake bigger amounts. The bigger the wallet, the more ISK people send.

An image of what the mark sees. It looks reassuringly trustworthy! 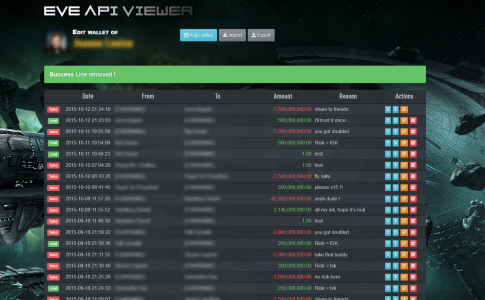 This image, however, shows a VERY different picture!

It was used by every char that worked for me, with minor modifications

TMC: ISK scamming has been around for as long as I’ve played. What made you more successful?

JL: Being in every hub in multiple time zones, and because workers were very good I think. Some did more than 10b a week.

JL: I still don’t really get it, why people still sent ISK the day after CCP Falcon posted the news. I was able to get more than 500 million ISK by sending the same scam WITHOUT any wallet API, and it still worked.

JL: They never read. My bio is full of bullshit.

JL: I don’t even know if the English words I put in are correct English. I think it’s about colours and word “BILLION”

TMC: Did anyone scam you back?

JL: Scammed me how?

TMC: As in, know they were being played.

JL: You mean, avoiding my scam?

JL: Some should have. They post “scam” in hubs next to our spam, but they don’t stay long as the scammers stay. Scammer will never leave — too much ISK to lose! We never double anything for real. That’s the point! The minimum amount is 50m. We always keep it. Since other people send 500m or more, we don’t mind losing a people who don’t “risk” more than 50m. As for feedback, EVEmails I got from people who fell into the scam were mostly positive!  “Ahaha well done, nice fake website” mostly, or “well I’m dumb.” A few ragers, but fewer than you’d imagine. You can see on the Jeanne Louise wallet, but all outgoing transactions are fake ones.

TMC: I wouldn’t doubt that. I’ve accepted one or two unwise contracts, but nothing terrible, thankfully. I’ve never fallen for ISK scamming. I’m amazed anyone does.

JL: I’m still amazed too. It was too good to be true. CCP said that we literaly doubled the amount of doubling scams. I’m really transparent about this activity since it’s 100% done. We won’t come back on this scam, and I didn’t have time to code another site. The weeks before CCP took action, I did a last “upgrade” of my website so it can be administrated by friends of mine. I was about to give everything to them and retire. Then CCP reported us, and I retired a few weeks earlier than I’d intended. Friends now count on me to find another way of free ISK.

TMC: Not your problem, surely?

TMC: What got you started?

JL: When I saw an eveapi.com guy posting this scam in Jita, it was my first time in Jita. I saw the scam and asked myself: why does the guy use a site to show his wallet, and why I need to send him money? Must be a scam. I looked at everything and tested his api with 1isk, saw the site updated my transactions. I was thinking “wow nice fake, and easy to do (since I’m a pro dev).” The evening I got in Jita, I was about to test my site and it worked well, even at the beginning. Then I got the people that inspired me (eveapi.com member) to work with me since. He was my best worker ever!  He retired from scamming a few weeks ago.

I worked with Russians, Australians, US, EU, and corpmates. That was a nice thing in this adventure, the chance to play with and getting to know people from all around the world. In one year, you begin to know people kinda well. You share lots of personal details; scammers are not as paranoid as people would imagine.

TMC: So how do you feel about being shut down?

JL: Well, I knew that CCP would do something one day or another. It’s cool they haven’t banned others scams also.

TMC: Scamming is part of EVE.

JL: Yes, that was the first view I had of EVE: a “space pirates” game. I wanted to be a pirate, and I did it a way I’m kinda proud of.

TMC: We approve of piracy muchly.

JL: For my reaction, you can say that I’m really disappointed I didn’t have stats before February

JL: Because CCP shut us down with 1937 active scammed people. We didn’t reach the 2000 we planned to party about. It was a matter of days.

TMC: How do your ‘workers’ feel at the moment?

TMC: So they are upset the ISK fountain dried up?

JL: Nothing lasts forever. The fall is hard though.

TMC: How many has your scam affected though? You may have taken all they had?

JL: I always hope people won’t send everything, because of security, but some don’t have limits. The record we have, which I can remember, was a guy who sent four lots of two billion ISK in a row. He told my guy he bought plex to pay that amount. I felt very bad. It was a huge amount of real money if he really did (and he seemed to).

Crocodile tears? Most likely, but I suppose in some ways that Jeanne Louise and people like him have always served a purpose in EVE. They teach people that not everyone plays nice, and yet in turn, they are nice to their own friends in the sense that ‘Even gankers and scammers need hugs too sometimes’.  For example, perhaps a Code. member may be having a hard time juggling two jobs and the school run, so killing your AFK miner makes their day. Maybe that smart bomber in Rancer just got fired, or her boyfriend dumped her, so your unscouted gate jump made her day?

Jeanne signed out with this thank-you for everyone who unexpectedly found moths flying out of their formerly ISK-filled wallets. 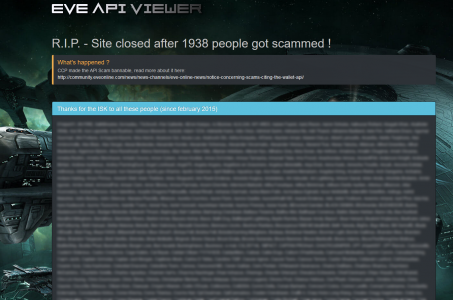 R.I.P indeed! We have no doubts that the inventive denizens of New Eden will find new methods of scamming one another in the future.