The Summer of Archeage

The Imperium Marches into Archeage

Archeage is a sandbox-style Korean fantasy MMORPG by Trion that was released in North America in the fall of 2014. It offers a type of open-world PVP combat that is often lacking in other MMOs and has become somewhat infamous for it, especially for its high seas naval pirate battles. With its robust crafting, farming, trading and housing systems, players can buy land and create materials that will be instrumental in fueling their kingdoms and imperial ambitions. For this reason, and in many other ways, Archeage is like the fantasy equivalent to EVE Online. The scope is epic and the sandbox has lots of sand. There is a sense of boundless ambition where the smallest solo-farmer can affect the larger whole and impact the destiny of empires.

For the new player stepping into the realm of Archeage, be prepared for some typical MMO mechanisms mixed in with a variety of complex new ones. I found the questing mechanics to be very similar to most MMOs out there: yellow exclamation point gives the quest,and yellow question marks finish quests with different colored question marks differentiating between the main plot and other kind. When compared to Everquest or the original version of World of Warcraft, the leveling is not as grinding as one might think. Of course, there’s a lot more than just leveling.

While XP is the primary resource use to level up with, something that sets Archeage apart is its labor system. Labor is an important resource that accumulates and is utilized in just about everything you do. Think of it like an “effort tax.” Players will passively collect labor points while logged into the game and then, depending on if they are subbed or not, they can continue collecting labor points even after they log out. The “effort tax” comes into play when doing any type of skill involving professions, or even something mundane like opening loot bags. Sometimes it’s just not worth the effort, so be careful, especially if you are playing for free. 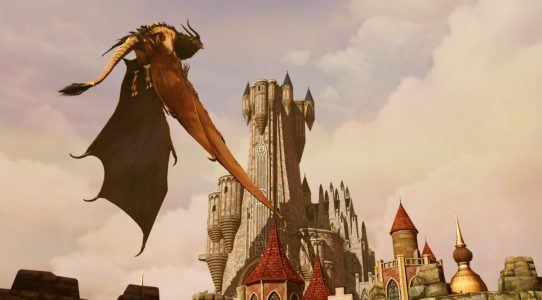 Perhaps what is most attractive to me, is the huge amount of possibility in Archeage’s open world PVP system. Part of this is due to the amount of open-world bosses. Unlike other MMO games that tend to protect PVE bosses behind instanced raid dungeons that exist outside the universe, Archeage’s most powerful creatures are out and about in the real world. This makes downing a world boss an epic struggle as rival raids focus on interrupting and stealing each other’s boss attempts. Mixed in with high seas adventure and trade route raiding, Player vs. Player combat is a cornerstone of the game.

Grinding through levels in an MMO is nothing new, but unlike other MMOs where I feel as though the adventure gets limited to the max level or “end game” i felt my adventure start fairly early on by taking advantage of the sandbox and doing some out of the ordinary. At level 18, a few hours into the game, a guildmate from the Imperium ran me through two dungeons to help me get some quests finished while grabbing gear and more XP. While the first dungeon was easy to access, the second one was on the enemy’s continent. We teleported there and ran the dungeon without issues, but the real adventure happened in our escape.

For whatever reason, we had to take a boat back to our continent, all while we were being chased and hampered by other players. It was a rush! I died, but eventually we were able to get away, and the chase was really fun. It is with a sense of adventure that the Imperium begins its “Summer of Archeage.”

For those interested in playing Archeage with the Imperium and riding alongside some old friends as well making some new ones, visit the forums to check out informative guides as well as other useful tidbits. To help accommodate and coordinate everything better, we are also switching up our normal operational utilities. 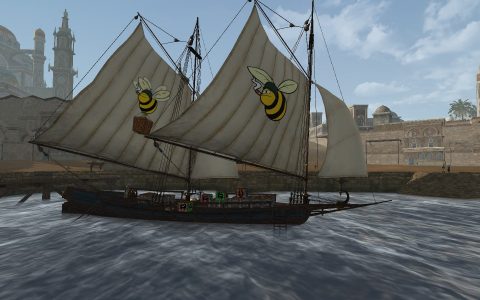 Instead of using Mumble and Jabber, we have switched to a single Discord server. This will also help us integrate and coordinate with people, not just in Archeage, but in the many other games we play as well. Feel free to join it. If you are in an Imperium-related group, follow the instructions in the #info tab to get your Discord roles sorted. In addition, the Imperium is also rolling out its very own subreddit at reddit.com/r/theimperium. Feel free to join the discussion on reddit and post about Imperium related activities there or things you think our community might be interested in.

To get started, simply roll a character on the eastern continent as part of the Harani faction, do the tutorial, and start questing! While you get some basic newbie quests down, get on Discord and check out the forums to figure out what you want to be. Don’t worry too much if you feel like you chose an incorrect spec, as you can always change them around later. Of course, when in doubt, healers and tanks (people who taunt bosses and take lots of damage) are always needed.

The plan right now for the Imperium in Archeage is to encourage people to go out and get geared so everyone can enjoy some of the metagaming and fights that will happen once the new Imperial legions have been outfitted. Like anything that happens in the Imperium, we recognize that new players are key in helping us achieve anything, and for that, we’ll need lots of mentors and mentoring so we’ve got jobs for everyone. There is also a starter pack gifted to us by Trion which will help new players level faster by removing worries about some of their gear, so be sure to take advantage of it! At some point, we will plan to raid and use our naval fleet to cause havoc on the high seas and who knows, maybe take a castle or two!

This article originally appeared on TheMittani.com, written by Porkbutte.