Stellaris, a grand strategy game set in space by masters of the genre, Paradox Interactive, was released in early May. Although highly anticipated, Stellaris received a positive reception, but it was not without its issues. A common opinion expressed by early adopters could be stated as, “It’s good, but boy does this game need some work”. Luckily, Stellaris is run by a group of folks with a track-record of modifying their games post-release based on community feedback and common sense.

Seeking to reclaim lost footing, this week Paradox released a new patch for Stellaris (1.2.0, Asimov) taking aim at fixing a wide variety of gameplay features, and in the process, altering the very pace of the game. This new update boasts a wide variety of changes that alters the core architecture of Stellaris, the very appearance of space, the veracity of fleet battles, piracy, slave dynamics, the inclusion of “nomad fleets”, early-to-late-game pacing changes, and tweaks to diplomacy. 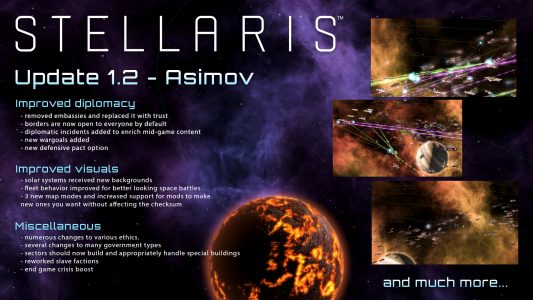 The patch will update automatically through Steam. The patch was proceeded by a variety of developer diaries taking aim at border changes, space battles, and creating a more beautiful game.

Let my people through!

Players will notice immediately that borders of neighboring civilizations will not prevent them from travelling through (that is of course, after communications have been established). Borders are now open unless the specific group has an ideological difference against them, or does not like the way you conduct your space business. This opens up the field for further exploration of the map that is not limited by early-game conquering. It also relaxes the game a bit, and you may find your self not having this huge desire to expand beyond your britches. There is more room to work at fortifying what you have while at the same time exploring the great unknown.

Open borders do not come free. As Paradox explained, “To reduce exploits of the open borders, we have chosen to introduce an Influence cost to colonizing planets or building Frontier Outposts. This cost will be based on the range to your closest owned system”

Trust is really a simple thing

Embassies have been removed, and in their stead is the new Trust system. This plays heavily into the open borders gameplay. Trust will be obtained by trade or by other diplomatic avenues. Trust will be lost by a variety of gameplay decisions, like waging war on somebody’s friend. Details of trust dynamics are provided in the diplomacy windows as seen in the screenshot below. 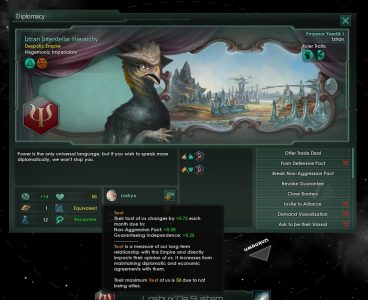 An easy way to gain trust is by providing my avian neighbors was by a non-aggression pact and a guarantee of independence.

In addition to the tweaks to borders and the new trust system, several new diplomatic options have been placed in the diplomacy screen.

Wargoals are also a major feature of Asmiov. Players can now invite other AI races into war with them (that is if that race is neutral or better and has something to gain from the war). Mutual defense packs can also be brought into accord should either group get attacked bringing multiple sovereign groups into bloody galactic warfare. Several new wargoals have been added to the game overall to make things more interesting. One of the new options is to make the opposing state a Tributary, which basically means upon their defeat they owe you taxes (25% monthly minerals and energy) unless they wish to strike another war with you. You also have the option to humiliate (netting you 100 influence and reducing the oppositions influence gains for 10 years). You can even force the hostile entity to open their borders upon their untimely demise.

Overall these new wargoal options add a lot to the depth of the game. Where people had complained about the lack of “expansion by colonization” beyond a few planets or AI-guided sectors before. These new avenues of galactic conquest will surely allow your race of space slime or fanatic collectivist birds reign supreme for eons to come.

Tired of the dull simple space provided with the original release of Stellaris, Paradox art developers used a crafty way to spruce up the space assets without changing the memory demand of the game. The art developers used a color pallet altering formula to provide a more diverse subset of space locales in the game. The end result is a much more beautiful game. Just check out the shots below. 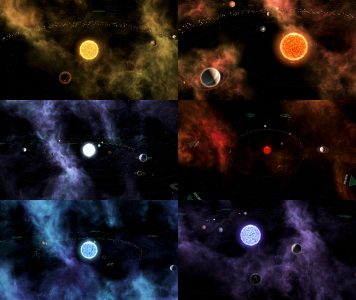 Space itself is not the only visual improvement offered in Asimov. Fleet battles are also more brilliantly displayed and look less like a swarm of bees colliding into one another. Fleets will engage from a distance if they can, go broadside, or up-close and personal depending on the weapons equipped and the circumstances presented.

As in other Paradox games, being able to see a variety of game statistics and values via the map interface is really helpful for making game decisions without too much clicking. With Asimov a few new map modes were added. The Diplomatic Map Mode will show your diplomatic relations with other Empires, such as whether you are at war, are allies with them, or are blocked from entering their borders. The Opinion Map Mode will show their opinion of you, and the Attitude Map Mode will show the AI’s attitude towards you.

In a Paradox first, new mods for Stellaris are already spinning up that allow for manipulation of these map modes. It will be interesting to see how these develop as no Paradox game to date has allowed modification of the map modes in-game.

Taking Asimov for a Spin

Let me be honest. I haven’t put in as nearly enough time into Stellaris as I had hoped to since it came out. I, like the untold masses, was slightly disappointed in the first iteration of Stellaris and was waiting for a patch like this one. I chose instead instead to sink my time into another new Paradox game, Hearts of Iron IV, reviewed here by Markonius Porkbutte.

Booting up Asimov, the game felt fresh. When my first piracy encounter happened and I quickly laid them to rest, I thought well I wont see that again – in the first version of Stellaris once the pirates were destroyed, it was over and done. This time around, as I was starting a war with my neighbor, out of nowhere the pirates struck again, causing me to have to deal with their menacing ways. At the same time I was building trust and was actually able to get my close neighbor to join me in a war making the nearby slime lords our Tributary (at the time of this writing there were some bad decisions in this war, it is not going to plan!).

Slaves before were slightly broken. There were no uprisings. My collectivist Avian slaves were docile and boring (but very effective). Now players will have to deal with slave uprisings that may even turn violent. Several times during my years long war Slaves of my home planet revolted and actually killed non-slave populations. Bird-on-Bird violence. Sad, but the game gives you options of dealing with the slave revolts that I should have paid more attention too. When I did pay attention to them, I was able to squash the rebellion, but at a cost to precious resources.

When it comes to exploration, having open borders with most groups is making this part of the game a lot more enjoyable. No longer is it a mad dash to explore as much as possible before my borders are tightly squeezed. If I play my political cards right, this can be very lucrative. Playing the wrong cards and you may find yourself isolated at the edge of the universe.

All of these things said. I have only been able to spend about 3 hours with the new patch and only with continuous game-time invested and some multiplayer gaming sessions will I truly get a feel for the new Stellaris. However, I am looking forward to venturing forward and seeing if my lofty space empire goals could maybe become reality.

The next update for Stellaris, named Heinlein, is slated for the near future (probably the end of Summer) and will feature more scripted events to alter the pacing of the mid to late game. Stay tuned as we continue to provide coverage of Stellaris and other Paradox games.

This article originally appeared on TheMittani.com, written by Anehii.