Steel Division: Normandy 44 is an epic World War II real time strategy game that puts players in control of some of the most famous units that participated in the allied invasion of France and the opening of a new of the western front against Germany. For those familiar with Eugen Systems “Wargame” series, this is not another iteration (or reskin) of one of those properties. Instead, this is the start of something new.

Lovers of WWII and RTS games will find a rare blend of historical accuracy and strategic balance, with a fairly easy-to-use user interface and beautiful graphics. The experience is further highlighted with pacing that feels very fluid and engaging – each bit of ground feels like a real and viable place to fight on. Strategic and tactical options abound, allowing for interesting battlefield decisions.

While the developers certainly improved the single player experience versus previous Wargame titles (the AI still cheats), a majority of enjoyment while playing Steel Division will be found either in multiplayer co-op or multiplayer head to head style matches.  For fans of RTS games, it is still a must-have, especially for those that enjoy the time period.

To really understand how Steel Division works, it is important to understand that at its heart, it’s a deck-based strategy game – like Magic the Gathering but with Panzers. Depending on what division a player chooses, its corresponding deck will have somewhere around 28-35 slots for various types of units. Having a set roster forces players to make sacrifices.  While commanders can carry out a multitude of tactical choices with their armies on the battlefield, the real strategy comes down to how each player chooses to build their deck.

In order to understand how to build a deck though, a player has to understand the three phases of each battle – A, B, and C phase.  The units that make up a division are restricted to certain phases, so for example, a unit that says “C” on it can only come out in phase C. Thankfully, it is retroactive so if there are leftover units from phase A, they can still be brought out in Phase C. There are only so many unit slots per army, so a player must choose wisely where to stack certain units and where to go without.

Each army also generates resource points. These points are what get used to call in additional units as the battle progresses. Some armies generate resources better than others so it is something to consider while applying the strategy of a division’s deck. That said, resources are not the only limiter on how good/bad an army will handle in the field, so it’s best to keep an open mind.

This is mostly a recon and skirmishing phase. Recon units are tremendously important in Steel Division and should be used to scout every road and choke point possible. Line infantry units can be used in this phase to set up basic lines of defense or take early choke points and hope they can hold them until reinforcement comes from later phases.

This is the first major “push” phase. Generally, heavier units unlock in this phase and it is a good time to take ground that wasn’t taken in phase A.

This phase has the heaviest units and is generally going to be a reinforcement or counterattack phase. By this time, the enemy’s positions should be known (if you don’t know them then you aren’t using enough recon) and the heavier, more expensive units from this phase can be spent wisely.

The Flow of Battle

Every game begins with a map and faction selection screen. From here other players can drop in or a game can be set up using AI instead. A big gripe I have here is that Eugen Systems does not link to your Steam friends list. While you can make a friends list with people you meet in the game, you’ll have to get your buddy’s Eugen System’s name and send them an invite to a match. Then, once in the match selection screen, you can add them as a friend. This whole process is needless and clunky. Given you make it past that, next, you’ll need to decide on what division to bring to the fight.

There are three major types of divisions: armored divisions, airborne divisions, and infantry divisions. Each one will have its differences. Some will have more unit slots than others depending on what type they are and some will gather resources better than others. Regardless of what you choose, each division will be comprised of a combination of these units: recon, support, infantry, tanks, anti-air, artillery, and air. Knowing a division’s strengths and weaknesses is the key to success. Some divisions work best by rushing across the map to take and hold certain choke points. Others work better by hanging back and playing defensively until more resources can be gathered to make a big push in the later phases.

If all of this sounds incredibly complex, do not worry! There is a tutorial that will guide you through the basics of movement, concealment, and building your decks. Other players have also put together some pretty decent guides as well. The learning curve is a bit high, but players should not let that discourage them from going toe to toe with each other. 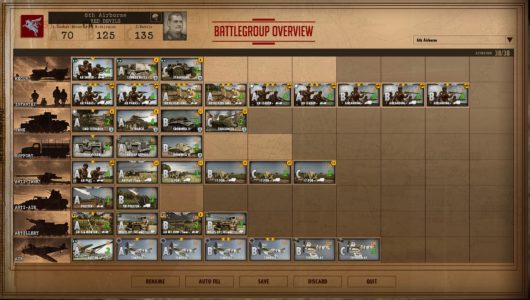 This is the most disappointing aspect of Steel Division: Normandy 44. Since purchasing the game in April when it was in early access, I have been looking forward to trying out the single player campaign, but was somewhat dismayed when I learned that it would not be coming out until the game’s full launch on May 23rd. I was further disappointed when I discovered some of Eugen System’s classic single player pitfalls that seemed to follow their games like ghosts. Bottom line: the AI cheats.

In playing through the allied campaign, which starts you out as the 82nd Airborne, you’ll go head to head with some of germany’s most veteran units and get to try your hand at some hair-raising operations. While the first two missions are fairly straightforward, the third mission is a real deal breaker for me thanks to some telepathic German Artillery positions and a crappy allied AI that is supposed to aid you.  Like any other single player game where the AI is supposed to “assist” the player, it turns out that the AI is more of a hindrance than an assistance.

In short, the mission has you defending some river crossings (it’s more like a creek) against an armored assault, but most of what comes at you is infantry backed up by a few tanks. Most of the armor is sitting safely out of range at the back of the map, waiting for you to counter-attack once you defend long enough to get allied AI reinforcements. While the reinforcements are armored and are supposed to be taking out the German tanks, what ends up happening is that they stall out, leaving you to have to push up with your infantry units and their anti-tank emplacements, which they have to slowly wheel down the road because the jeeps that initially hauled them have run off. Complicating matters, the mission is on a timer, but by the time you realize that your allied AI armor column is basically useless, you will not have enough time to finish the job. So, you have to replay it.

Upon replaying mission 3, you might be tempted to focus on the secondary objective: taking out the AA guns in the eastern part of the map so that the 8th Air Force can bomb the German armor to the ground; but guess what? You’ll go through all the effort to take out the guns only to find that the 8th Air Force’s bombs are useless. Not just useless, completely useless. They might as well be dropping extra pillows for all the pillow fights that the Germans are having while waiting for the allied forces to get their act together.

The only option is to replay it again and this time, ignore the AA guns in the east and ignore the Allied armor column.  It is best to just advance with mortars, dropping smoke to cover your infantry, and hope that you take out the enemy armor before the time expires. It is possible to do, it just is not fun. All the while, your own artillery positions will get magically nuked by the telepathic German artillery necromancers way on the other side of the map. Needless to say, this all needs some sort of pass, which is frustrating considering it’s something that could’ve been done during the early access period where players could submit feedback about it.

For those that have played a Eugen Systems game before, none of these complaints about the single player are that surprising. In fact, this is the first RTS game where a player will be better suited by ignoring the single player altogether and just jumping straight into multiplayer. You’ll learn more and you’ll have more fun by ignoring single player. This is a downside because a lot of RTS gamers, myself included, like single player modes. 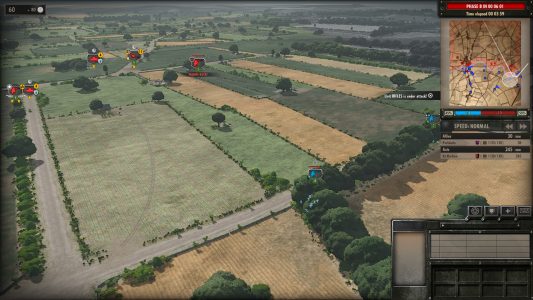 Hedging in the Hedge Groves

Despite a few shortfalls, there are a lot of parts where this game really shines. The map detail, where the developers based their designs directly off of allied reconnaissance photographs, makes for nice nuanced levels. The terrain acts almost like a 3rd enemy. Fighting from hedge grove to hedge grove is daunting, stressful, and adds to the appreciation I feel towards those who actually had to suffer through it. There are lots of spots for ambushes and lots of choke points for armor. Often the terrain does not want to cooperate which adds a level of realism that is often absent from most RTS games.

The game also entertains certain historical questions, like “what would’ve happened if Rommel’s tank division had been let loose on D-Day instead of corralled where they were?” The panzers are phenomenal and one really gets the feeling that they are unmatched compared to what the allies bring.  The only problem is that there are not enough panzers to hold back the waves of allied liberators. In general, the Germans are very strong with highly disciplined elite units mixed in with some highly undisciplined conscripts.  Their tanks and artillery are impressive. They are a hard faction to play but a rewarding one for an experienced RTS player.

Though it has issues, Steel Division: Normandy 44 is the best Eugen Systems game so far for new players to jump into.  It is not a reskin of the Wargame series.  The combat and mechanics of how divisions work make for lots of replayability in multiplayer, despite having a somewhat clunky single player.  For those who enjoyed Company of Heroes or Hearts of Iron IV and other WWII RTS games, this will be a welcome addition to their libraries.