A few days back, Venal residents were astounded and amused to see citadels instantly disappear, their EVE-mail notifications flashing with messages that their clones had been destroyed, and their assets had been moved to lowsec.

CCP Steps Up Against Botting

CCP Peligro himself, like Zeus descending to Earth, had arrived in Venal, to provide long-awaited justice for relentless botting and ISK-selling groups currently swarming the region. To the amusement of local capsuleers, Peligro spoke directly to them in local (a very rare occurrence in EVE Online), promising more actions on botters and ISK sellers.

But, according to James Hordon, when the Olympian dust settled, only APEC Corporation and very few players, including Pavel XL and himself were actually banned. Hordon denies any RMT or botting. Rather, he says he was paid by corps not to harass their mission runners while also destroying the main competition for missions, Pandemic Horde (PH)  and Fraternity (FRT) pilots. Not a single other group of ISK farmers was touched, raising eyebrows and questions.

There are three major ISK-farming factions in Venal, with hundreds of characters doing Level 4 missions 24 hours a day, seven days a week. It’s almost impossible to document this behavior. Even CCP has trouble confirming botting, but people claim to have witnessed such behavior over a long period of time.

Pandemic Horde (PH) is the biggest ISK farming group, with at least 40+ characters running Level 4 missions day and night. PH has a dedicated corporation called Burner Beans for such missions. They pay a 45% tax.  No human player would stand for such a tax when they could run missions elsewhere and pay far less.

Not long ago, PH had a number of citadels in each system, where the characters running missions keep their ships.  According to Hordon, these structures were all destroyed by Pavel XL and himself. As a result, PH characters use Fraternity’s citadels, since being in the “blue donut” gives them access. Having a safe citadel is absolutely essential for ISK farming.

Fraternity is a second biggest ISK farming group, with at least 30+ characters running Level 4 missions day and night. When Venal residents tried to destroy FRT citadels in the region, FRT leadership responded, with Noraus (the leader of FRT), bringing a full CTA fleet to defend an unarmed FRT Astrahus, far away from the motherland, and he threatened to purge all local residents from Venal. He then posted those threats himself in local chat, clearly indicating how importantly he views the ISK supply he receives from those ISK farmers.

To prevent any further aggressive action in Venal, FRT deployed a Fortizar-class citadel in every Venal system, to protect those ISK farmers and provide them with safe haven.

There is a big drama between FRT and PH, since FRT ISK farmers are not happy with PH ISK farmers using FRT citadels. Too much farming lowers the Guristas’ LP rate, subsequent to the ESS kicking in. According to Hordon, FRT leadership even EVE-mailed Venal residents, asking them to destroy PH citadels. This one purports to be from FRT leadership:

Drone Space Update – ImportantSo as expected when we started the war down south there were always going to be entities that wanted to come to our home for easy whaling.

Many of you have seen a motely crew of small entities looking for “good fights” hiding up in Venal.

While, at first the content was a great distraction from the TiDi fests and structure grinds that were Delve. Their continued interference of operations at home cannot go unchecked anymore.

As such, we will start moving to a position where we will remove them from the fringes of the drone regions. If they then persist in hounding our space, we will then look at further options, and while I do not want to if needs be taking a small excursion to their homes, and see how they feel about it.

To be clear the war with the Imperium is and will continue to be our main focus, and I still want to see everyone fully committed to the Southern theatre.

For all you spais reading this (and I know there are some) fun time is just beginning!

More information will be disseminated shortly.

It’s not clear to some how FRT can move back to Venal while also being “fully committed to the Southern theatre.” As of November 19, FRT troops, some 110 players strong, including Noraus – the FRT leader – are attacking Trigger Happy structures in HD-JVQ, a system in Venal. They are supported by at least 15 titans (see below) that are no longer on the front lines in Delve. 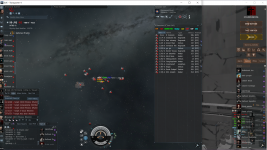 They were the third biggest ISK farming force in Venal, paying Pavel XL and Hordon for protection, while those two actively hit PH and FRT citadels to remove the competition. APEC corporation was using old Out of Sight (OOS) citadels, left over from the days of power and glory for OOS. APEC had no citadels of their own.

Now, APEC Corporation is banned. They no longer appear in Venal local chat anymore. Paxel XL and Hordon are also banned. CCP is in the process of investigating their conduct.

There are numbers of questions left unanswered. Are the FRT and PH characters that are running Level 4 mission 24/7, bots? Or are they just slaves forced to run those missions daily, without rest, taking time to eat, or having days off? The former possibility, botting, is punishable by a ban. The latter reason, slavery, should awaken in many a desire to unshackle.

If Pavel XL and Hordon were banned for protecting ISK farmers – and for receiving in-game ISK and items from them – will we see other offenders banned as well? Why punish only one of the three offending alliances?

What does the CSM think about this issue? EVE Echoes alliances have taken matters into their own hands. They aren’t waiting for NetEase to act and combat botting. Does CCP expect the same to happen in New Eden? Maybe we’ll just enjoy the silence before the storm and see if Zeus descends from Olympus a few more times.

Is Game Design a Numbers...

Where should CCP's priorities be, when it comes to game...