A Revenant faction supercarrier has been downed on the 16th of March by FCON, in the region of Immensea. If you do not know what a Revenant is, it is the first pirate supercarrier, from Sansha’s Nation. The hull alone is valued at 100 billion isk, making it as expensive as a Titan. On top of the hull value, these beasts are often officer fit, adding even more value to the kill. In this case, only one officer mod was fitted. The final value of the kill according to zkillboard is 108.6 billion ISK.

The first Revenant was killed in 2013 by Black Legion. With only 13 Revenant kill recorded, this loss is the third cheapest one.

Killing Rorquals can be expensive

The Therapists had been sighted killing Rorquals in Immensea and Tenerifis (almost FCON’s back garden), and in return FCON dropped some Rorquals belonging to The Therapists, like for example this (farming?) Rorqual… belonging to the Revenant pilot!

The fight today started out when Half Massed engaged some Rorquals with a Bhaalgorn, Sabre and Gila, and then Fraternity Alliance began arriving to support them. After approximately 20 minutes, capitals arrived on grid, and a cyno was lit to call for assistance from FCON.  There was a mixup in the response fleet which could have caused an entirely different outcome.  When the cyno was lit to call for assistance, the response fleet had just changed to a new FC. He began his own fleet, which meant that a second cyno had to be lit.

Eventually, the fleet arrived to save the trapped Rorquals and the fight began in earnest.  FCON did not hold back on the engagement, with at least 19 dreadnoughts, 7 carriers and over 40 battleships answering the call, along with Triage Fax and support ships.

As you already know, the revenant got killed, but the first capital ship to die actually was a Minokawa on the defending side. It was quickly followed by a defending Nidhoggur and the two ganked Rorquals (who had held out for over 20 minutes before assistance arrived). Combat then turned into favour of FCON, killing a Thanatos and the Revenant, along with several blops. The Revenant did not die along with its friends as it got caught and was dropped on by the enemy’s capfleet alone on the field. The entire battle report can be found here.

The Rorqual pilots were both on the Revenant killmail, having lasted almost the entire fight, they had managed to engage the enemy fleet, and were on several killmails, so were happy with the outcome. 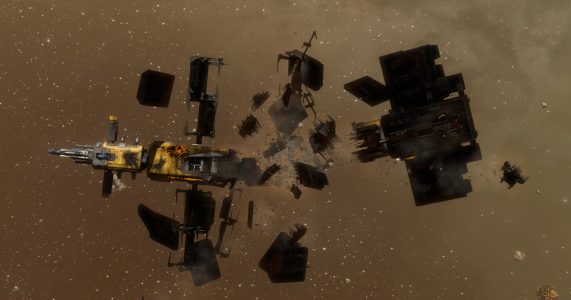 UPDATE: The original article text suggested that NUWA Foundation had the initial tackle. This has been corrected. Simonova Kalash of Half Massed reached out to us to give us their side of the story:

Two of our members stumbled on the rorqual tackled in, and we started best speeding whatever we had to try and kill it, they reinforced it with another rorqual (?) and a Nidhoggur, The Therapists asked if we still had tackle, and we were low on DPS, so we said sure. Minokawa cyno’d in, but we held the field until The Therapists could get their cyno’s in, at whilch point they brought in a blops fleet, followed by the supers. Minokawa, Nidhoggur, and after a panic, the Rorquals died, supers left grid, and we sat and killed whatever FCON warped on field while waiting for the Thanatos to leave until we saw the Machariel fleet landing, and decided to fuck off to home.

The Revenant died after we left system (we didn’t get to see the all the dreads come in, and had actually assumed all the supers to have already gotten out, not that there was anything we could have done). Apologies to The Therapists for the loss of their Revenant, but, we somehow managed to walk away with no losses after getting the initial tackle, the first escalation, and kept the field clear of FCON’s subcaps until the supers were off-grid. We are not blue to The Therapists; this all came about by them convoing one of our members about the Rorquals we had tackled.