Retaking Fountain, Plus an Ark

Monday, September 7, was part of a sluggish week 10 in World War Bee and The Initiative (INIT), an alliance known for taking the fight to its enemies, wasn’t about to let that opportunity slide. As EUTZ  prime time rolled around, INIT FC La Loca Fappuccino figured he’d try to test PandaFam by taking a fleet into Fountain, the former home of The Initiative. Like many members of the Imperium, INIT had consolidated forces back into Delve after fighting a delaying action against PandaFam in Fountain, helping to prevent the last Imperium iHub in Fountain from falling until August 13, 39 days into the war.

“The first day we moved in, we realized it was possible,” Fappuccino said. He took a small entosis hacking fleet into the Basilisk constellation, the entryway into Fountain from Delve, and started mass hacking nodes. Despite PandaFam still being staged in I-CUVX, in the next constellation over, INIT met no resistance. So, like any enterprising Fappuccino continued leading his fleet from constellation to constellation, reinforcing iHubs and TCUs in the region. Imperium intelligence had believed that PandaFam was planning to award swaths of Fountain to NullSechnaya Sholupen as a thanks for their contribution to the war effort, as well as to other, smaller alliances as spoils. 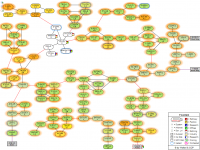 Fountain’s iHubs after the first day or so. Orange highlights indicate reinforced iHubs and/or TCUs

Once the INIT hackers started swarming the targets, other Imperium forces began showing up, including Goons, The Bastion, and solo hackers looking for targets of opportunity. “Tuesday morning we reinforced 20 more after down time. Just reffing everything,” he said. “People were doing solo hacks on alts, with cover fleets over each constellation, moving across constellations.”

Even when PandaFam harassers showed up to challenge the hacks, INIT had special surprised for them. “It’s all thanks to the workshop of Pando [Pandoralica, another INIT FC]. He used Gilas with a PvP doctrine fit, but basically dropped one of the high slots to equip an entosis link. There were Drakes and Mallers fighting off guys who showed up to battle us.” As the days progressed, INIT fought for nearly every node timer, even as PandaFam was redeploying to the South and dropping their new Keepstar in Querious. By late Wednesday, INIT had retaken half of the iHubs in Fountain. 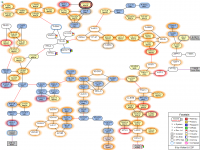 By Wednesday, INIT was fighting nearly every timer. Red highlights indicate active entosis fights and many systems were unclaimed

“There was this moment where we reffed everything and realized we needed iHubs, so we asked Goons, ‘Do you have any extra iHubs lying around?’ By that time, it was less about PvP and more about logistics,” he said. Their success was so unexpected, coming about the time that The Mittani blew the Horn of Goondor, that they were almost caught flat-footed. “Everything was completely reactionary,” continued Fappuccino.

By Friday night, INIT had taken all but nine iHubs in Fountain. A week after the hacks started, there were only four hostile iHubs remaining and all but one of them were reinforced.

But their sudden good fortune wasn’t only in the form of system sovereignty. Once he brought his second fleet out to keep hacking iHubs in Fountain, Fappuccino stationed his cover fleet in 3WE-KY, the hub system for the Pegasus constellation, the entrance area into Fountain from Outer Ring. As he organized his group to make sure their entosis hackers were safe, someone spotted an abandoned Astrahus in the area, which was a perfect anchor spot for them to quickly react to any trouble that might pop up.

He ordered his fleet to begin the structure bash so that they’d have something to do to while away the time. With the new abandonment mechanic, citadels in an abandoned state now drop all of their contents on destruction. Capsuleers who were playing in April and May may well remember the halcyon days of high sec piñata structure bashes carried out across New Eden. Two months into the war, however, no one was seriously expecting an enemy citadel in contested space to have anything of value if it wasn’t fueled.

A screenshot of the Ark that dropped in 3WE-KY

“The cans drop and someone says ‘there’s an Ark!’ We had a couple of guys on the fleet who could fly one, so we scramble to get stuff moved around, load it up with loot,” said Fappuccino. “Interestingly enough, the jump freighter had enough fuel to get it all the way to Delve, and the structure itself, despite being abandoned had fuel, it was just in the wrong hanger.”

They got the Ark, a jump freighter worth about 9b ISK, to a safe spot and got to work organizing a cynosural field chain, which would allow the massive ship to jump over large swaths of space. From 3WE-KY, they jumped the Ark to C-N4OD, a former staging system for INIT, then had it take the gate to KVN-36, then jumped again to Y-2ANO, and took the regional gate before jumping home to 1DQ1-A.

Once the loot was tallied up, Fappuccino estimates that the fleet made off with 15 billion ISK, including the Ark, that he hopes to distribute to people who went on the fleet.

AN EYE ON THE FUTURE

Fappuccino, like many strategic thinkers in EVE, is constantly thinking about what’s next after his successes in Fountain, and he thinks that there are some opportunities for success. “If I look at what TEST are doing, they haven’t made a dent. BRAVE are outdoing them in their own coalition! I have huge respect for PanFam, they did the real heavy lifting in Fountain.”

“TEST aren’t well coordinated, Progodlegend and Vily are the only FCs who get numbers. Now that things are getting serious, I think they have to make some progress with supers and Titans. Staging fatigue is real, people are losing ISK, making jump freighter runs, doing structure bashes. None of that is fun. I think we have to see the biggest fight in EVE in the two weeks to a month, otherwise they’re going to continue to see a drop-off in form-ups. Clock is ticking for Legacy and PanFam!”

When asked what he thinks the message he sent was, Fappuccino said, “INIT have been used to going on hostile fleets and flipping undefended regions in a week or less.” After Fountain, he’s expecting to go back on the offensive and let INIT do what they do best. “We’re always evaluating where hostiles are, asking ourselves, ‘Where can we go? Where can we make an impact?'” With INIT flexing their muscles again on offense, enemies of the Imperium will have to keep their wits about them lest INIT surprise them.

“I’m really hyped, really proud of the guys in INIT, logi pilots, line members, everyone. People are hyped and motivated, we’re looking forward to a big fight in Delve!” 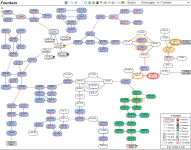 Fountain sov as of September 19. All maps courtesy of DOTLAN