The end of the Triglavian invasion is fast approaching and EDENCOM has urged “all Capsuleers who currently live in systems conquered by Triglavian forces to relocate and find a new home immediately.” It is unclear what will happen to the affected systems, aside from speculation, though some believe they will become gateways to Triglavian space.

A video released to Triglavian-aligned Capsuleers implies that Final Liminality systems will form a gateway to Triglavian space known as the Domain of Bujan. A partial translation of the video says, “We are Zorya Triglav, we speak for the convocation of Triglav outside the struggle, hear the words of our prayer. Realization of glorification pattern in Totality approaches. Ancient domain stability requires weaving of Final Liminality conduits. Totality (unintelligible) requires Triglav exalted Final Liminality. (Unintelligible) Sobornost Kybernauts are exalted to realize glorification pattern in totality. The flow of Vyraj requires realisation of stability of ancient domains. Sobornost Kybernauts realising glorification shall be (best guess: proved and become union). The Domain of Bujan shall be 3 cries of 9 (i.e. 27 systems in total. There are currently 25 affected systems, leaving two more to go). The flow of Vyraj will bring Sobornost of Triglav in the Domain of Bujan. We speak for the convocation of Triglav outside the struggle. We are Zorya Triglav.” 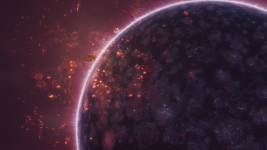 Kybernauts rejoice after Raravoss achieves Final Liminality this past July

Others aren’t too sure what the relocation means. FC Cameron22 of The Triglavian Initiative (TTI) said, “I’m not too certain about what it means … to vacate the systems. A few suspect that the NPC stations, at the very least, will be destroyed and replaced, and whoever still has stuff in there it will be either lost or moved to asset safety. I’m not sure about player Upwell structures, however. The general consensus is that NPC Trig stations will be put up and/or we’ll finally get to see the gates shut down. I routinely camp in Niarja and people constantly keep going in to die – it would be a shame if that were to all end as it’s been great fun, but if it does it is what it is.”

TTI member Scius Falkenhaupt was the first known Capsuleer to figure out that the Triglavians would need 27 systems in play to achieve the “Domain of Bujan.” He said, “We currently have 25 final liminalities, but those are out of 76 liminal spawns and over 170 spawns total. So while we want to get to 27, we will probably not (get there) with the next two spawns. Maybe it will take three systems, or four … depends a bit where and when they spawn and how much effort EDENCOM will put into defense.”

Falkenhaupt believes that the message from the video “sounds like a mix of acknowledgement of efforts rendered by pro-Triglavian players, and a forward-looking part that foreshadows their plans” and thinks “that it heavily implies that Kybernauts will be welcome in whatever becomes of their project.” He added that it’s “at least likely that the systems will be interlinked with each other in a novel way, while maybe disconnected from their current (New Eden) links.” 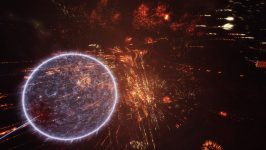 “The invasion managed to shake up the established order of EVE,” said TTI Discord moderator Mephodius Vassarionov. “Thus allowing it to create more opportunities for players to engage with the in-game world. Although these changes have not been received well by every single player, I believe something was needed to change the dynamics of not-null security space, which the invasion did a good job at. As for the systems (needed to finish), many FCs believe that we should take one more system or two. However, from a lore perspective (as we interpret it), it would be best to stick to the 27 as the number “3” is integral to the Triglavians. Introducing new lore to a faction which was previously believed to be hostile-only was a great move on the CCP’s part as it allowed many players to perceive the world of EVE Online in a new light, and not just a pure sandbox in space with little substance behind it.
CCP said that Capsuleers with +0.01 or higher on either side of the conflict will soon receive tiered rewards.