In a stunning display of waffling, TEST military directors Progodlegend (PGL) and Vily held a brief state of the alliance (SOTA) meeting earlier today in which Vily said the chances of their forces winning the war with the Imperium were a “coin flip.” Coin flips are also known as 50-50 odds, but odds aren’t the same as probability and this is where Legacy’s math gets a little shaky.

The purpose of the SOTA was to announce another move op in preparation for “attacking the biggest empire in this game,” Vily said, before appearing to ask his line members to pull out their wallets. He lauded his members’ “courage and fortitude [to] be ready to take that fight” and “to commit your thousands of dollars in assets.”

The move op will muster all of Legacy and its allies’ forces into Querious for a final push that PGL said would take between two to four months. “Today is when the real invasion starts and this is going to be pretty fucking epic,” he said, and claimed to have brought together “probably the largest coalition this game has ever seen, and we’re probably going to need it.”

They’re probably going to need it because the Imperium has “a lot” in Delve,” he added. “They have quite a massive force; they’ve called (sic) the Horn of Goondor. They are going to make their final stand and they aren’t going to hold anything back. It’s going to get very bloody very quickly.”

Math and Maps Are Hard

But back to the coin toss. Of the total strategic fights fought in the war, to date, the Imperium has won 60.1% of them. Probabilities aren’t coin tosses, so it’s probable that Vily’s odds are stacked against him. 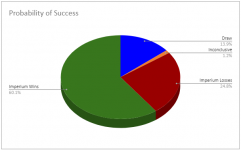 Of total strategic fights to date, the Imperium has won 60.1% of them

Onto the maps. “We’ve surrounded them – we attacked all their regions at once, we destroyed their salients, and now we have them encircled,” PGL said, despite the facts on the ground telling a different story. Of the three regions that surround Delve (Fountain, Querious and Period Basis), enemy forces have sovereignty dominance in only one of the three, and given the amount of territory taken back by Imperium forces over the past few days, a sliver of one-third might be a smidge too high.

Along with the math problem, PGL’s use of the military term “salient,” while surely impressive to his loyal listeners, also misconstrues its meaning. A salient is a “battlefield feature that projects into enemy territory. The salient is surrounded by the enemy on multiple sides, making the troops occupying the salient vulnerable.” So far, Legacy has yet to occupy any Imperium territory for more than a few hours, holds no territory in Delve, and can’t seem to get a presence in NPC Delve either. Indeed, aside from its sov-taking woes, its most recent foray into NPC Delve ended poorly, too. 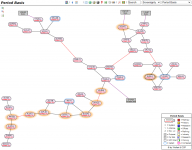 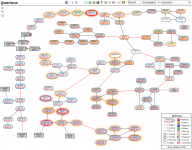 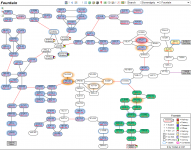 Enemy forces hold less than one-third of the systems in the three regions surrounding Delve, and their sov efforts continue to implode by the hour (Maps courtesy DOTLAN)

In conclusion, PGL told his line members, that “we cannot lose as long as we execute properly. We’ve got the numbers; we’ve got the titans; we’ve got the dreads, the FCs. Goons have the advantage of defensive game mechanics, but otherwise this war is ours to lose, and we’re not going to lose it.”

He said, “Over the next few months, we are going to invade Querious and Delve and destroy everything Goons have built.”

Maybe. The odds are even, but it’s not probable.