In Hasmijaala on June 12 in The Citadel at 09:18 EVE time, a group of ONLY FOR FUN (OFF) capitals was destroyed by Out Of Sight. and their neighbouring friends. Five ships were lost by OFF for a grand total of over 63 billion ISK, including two Nyxes, a Thanatos, an Archon, and a Proteus. 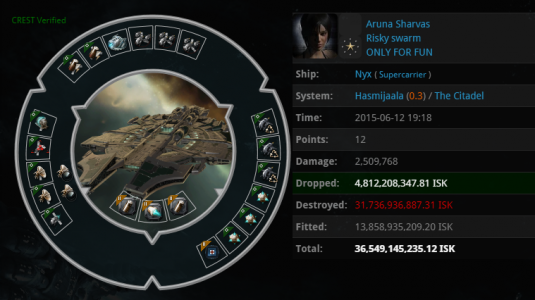 A recording of the fight from an Out of Sight member

The fits on the Nyxes show that subcapitals were their main target. The Nyxes had sensor boosters and target painters in place to lock and apply damage more quickly to a smaller ship. The dead Archon was triage-fit while the Thanatos was fit for damage, and carried Hammerheads in its drone bay. Naturally, the killmails do not reflect any drones active in space.

TMC contacted the people responsible for the gank, who declined to comment. PowerHack, pilot of one of the Nyxes to die, responded to our request for information.

According to PowerHack, OFF formed the fleet to kill a single pilot: Tau AD. This information backs up the fitting data from the destroyed ships. Whatever the level of forethought this operation had, Tau AD clearly has some very bad rep with somebody who wields power — at least enough to send a pair of supercarriers out to die.

This article originally appeared on TheMittani.com, written by Siaka Stevens.