On Thursday 3rd October, the power vacuum that everyone assumed would take place in Fountain failed to occur, as The-Culture. dropped all of their non-reinforced sovereignty  structures, allowing The Initiative to move in and claim the northern half of the region of Fountain. 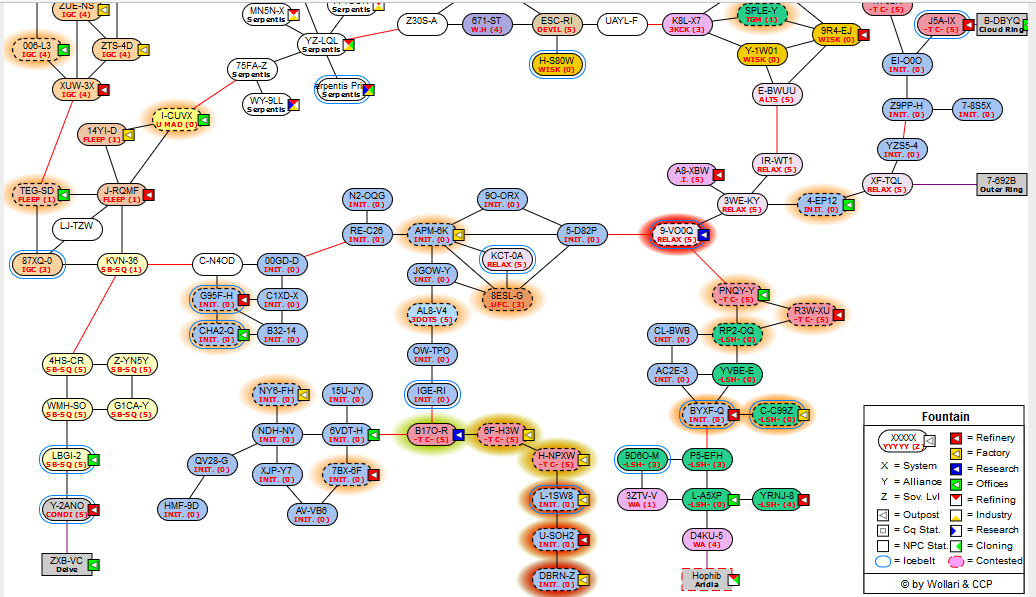 As seen in the image above, Initiative. now control all of the space between C-N4OD and J5A-IX, with Lowsechnaya Sholupen controlling parts of the two constellations of Wyvern and Taurus in the bottom right of the picture, towards Aridia. The currently reinforced systems in Initiative’s new home are stations being reinforced. In this quick and suprising move, The Initiative. have received very little resistance.

What does this mean?

With The Initiative. taking Fountain, it means the Imperium and its allies now control space from Delve to Cloud Ring. While this does not mean anything right now, if the Imperium decided to march North again to fight against Pandemic Legion and its allies, it would allow for a capital and super-capital highway from Delve to the borders of Pure Blind.

How the Initiative. claiming the northern part of Fountain effects the smaller entities living nearby remains to be seen, but one thing is for sure, allowing their allies to claim Fountain adds another buffer between the Imperium and it’s enemies

INN reached out to Sister Bliss, of The Initiative. for comment:

INN: What lead to the decision to take Fountain, in the wake of The-Culture announcing they were leaving?

Sister Bliss: Fountain has always been one of the Universe’ iconic destinations and we’re delighted to have the opportunity as new caretaker to experience it’s majesty first-hand.

INN: So, what are your intentions for the space? Rental? Or a home for the foreseeable future?

Sister Bliss: The previous ownership has unfortunately (despite good intentions) allowed the region to fall into disrepair and decay. Our first order will be restoring much of the habitat to its former glory.

INN: Interesting, what do you mean by that?

Sister Bliss: A benefactor who wishes to remain anonymous has kindly donated 25b towards the maintenance of the famed hanging gardens of Pegasus. We have pledged to fully restore and re-open this long-neglected wonder for the galaxy to enjoy.

INN: Did the upcoming changes in moon mining influence the decision at all?

Sister Bliss: We have long looked on the region with a sense of wonderment and yet despair as unregulated terraforming has done untold and in some places irreparable damage. We are optimistic that a sensible approach to fracking, coupled with re-investment in the environment will create a sustainable platform for all off-world colonists, where we are offering capsuleers a chance to begin again in a golden land of opportunity.

While Sister Bliss’ comments are all in jest, The Initiative’s peaceful conquest of Fountain may have significant strategic importance if a war were to break out between the Imperium and Pandemic Legion.

(Editor’s Note: The original text of this article deleted a segment of the interview which altered the context. This has been corrected.)