The EVE Vegas Keynote is about to begin, streamed live at https://go.twitch.tv/ccp and we’ll be bringing you live updates here.We will also have Dabigredboat and kcolor giving commentary on our INN Twitch channel.

Keynote’s opened with a recap of major events and features from the past year. There’s an update on Project Discovery, 85000 capsuleers have classified more than 38 million results in the search for exoplanets.

Lifeblood expansion shipping in 2 weeks. CCP Nagual talking about Upwell Refineries and the moon mining changes. For those that aren’t familiar, a refinery will carve out a chunk of a moon, pull that chunk towards the refinery, fracture the chunk into asterioids, and finally players can mine moon minerals from that asteroid field. Only one refinery will be allowed per moon. The process will take 1 to 3 weeks from the start until the ore can be mined. There will be the chance of a “jackpot” when the moon chunk is fractured into an asteroid field, yielding much more valuable ores.

CCP Fozzie talking about the moon mineral redistribution now. A new random seed for that redistribution will be chosen by player vote during EVE Vegas.

Now talking about future Upwell structures after the refinery launch. “Upwell Strutures 2.0” during Q1 2018. There will be an active/inactive state added for structures. A structure with no active service modules will be inactive, will have lowered HP, and no armor reinforcement timer. A new reinforcement system will also be introduced. The initial shield vulnerability can happen at any time, while the defender can control the time for the armor and structure reinforcement timers. The possible length of the timers will continue to differ for various areas of space. Structures will have burst projectors similar to supercarriers, and the “GTFO” function similar to titans. Structure Void Bombs will be going away. Moon mining will be coming to W-Space and some highsec systems. These will give high yields of normal minerals, not moon goo.

Outpost Removal and their replacement with Faction Citadels are still planned, but will now happen at a later time in 2018.

Development Manager CCP Burger on stage now with more updates about Lifeblood. Blood Raiders will be setting up Forward Operating Bases in highsec, and there will be new fleet-oriented PVE around their activities. The Guristas are also setting up Sotiyos in the North and making inroads into highsec. There are hints of a tie-in with the new Resource Wars feature.

CCP Rise on stage now, talking about nearly a year of clone states and the next steps. Alpha clones have brought back a large number of players and increased the number of players trying the game. “A lot of players still feel like Alpha is an infinite trial.” There will be a significant number of new skills added to Alpha Clones in December, including Tech II Small and Medium Weapons skills, Batttlecruisers, Battleships, Tech I Large Weapons,  the removal of Racial skill locks, and access to pirate faction ships. Alpha clones will now have access to over 20 million skill points. Training will pause at 5 million skill points – you will need to subscribe or use injectors. 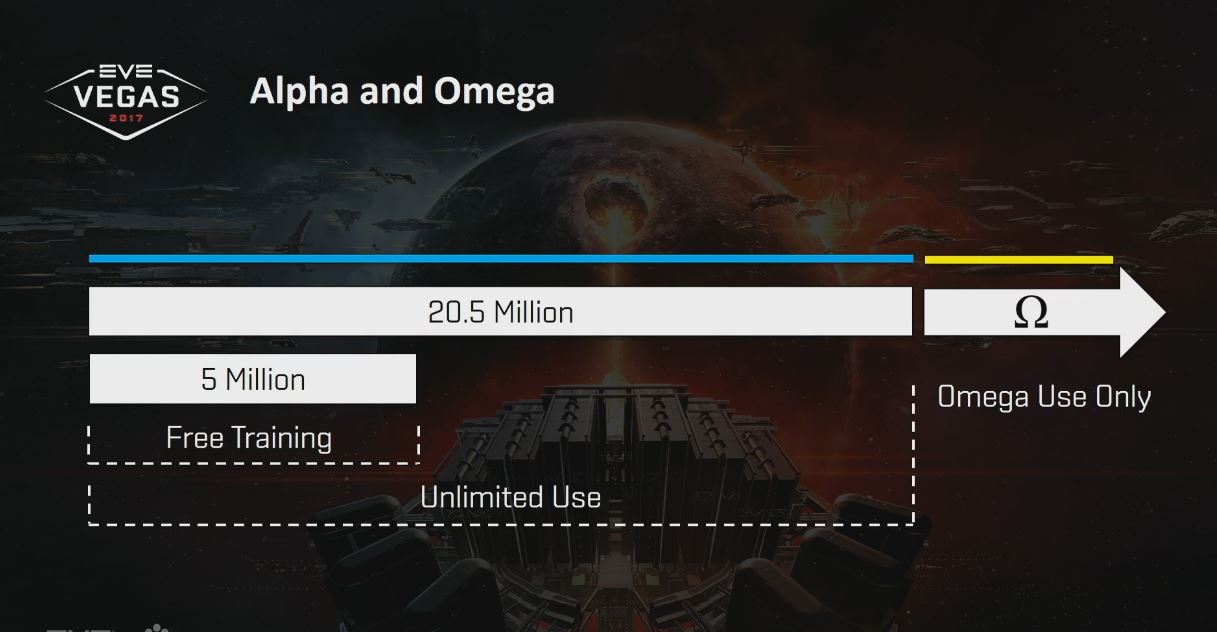 CCP Falcon on stage now. with a summary of things to come this weekend, including updates later this weekend about the Agency event, mining ledger, and game balance.

The stream is taking a short break after which we’ll be going into the CCP Presents events with CCP Hilmar.

We’re back again, with coverage of the CCP Presents session. CCP Falcon is on stage to introduce CCP Hilmar, who is at EVE Vegas for the first time. CCP is celebrating 20 years in business, and nearly 15 years of EVE Online.  Daily active users has increased 18% in the past year. Talking about CCP’s exprements into VR now, including Sparc, and the EVE Valkyrie Warzone release. The DUST 514 successor, Project Nova is now expected to release during 2018, with more details coming over the next few months. Hilmar announced Project Aurora, a mobile game setting in the EVE universe. CCP Argent, the producer for Aurora is now on stage.

Aurora will not be linked to EVE Online, but will offer a “condensed” version of the EVE experience to mobile users, developed in conjunction with mobile studio PlayRaven. Examples were shown of Rifters with Railguns and Purifiers with Lasers, and a “Relic Wars” competitive mode. 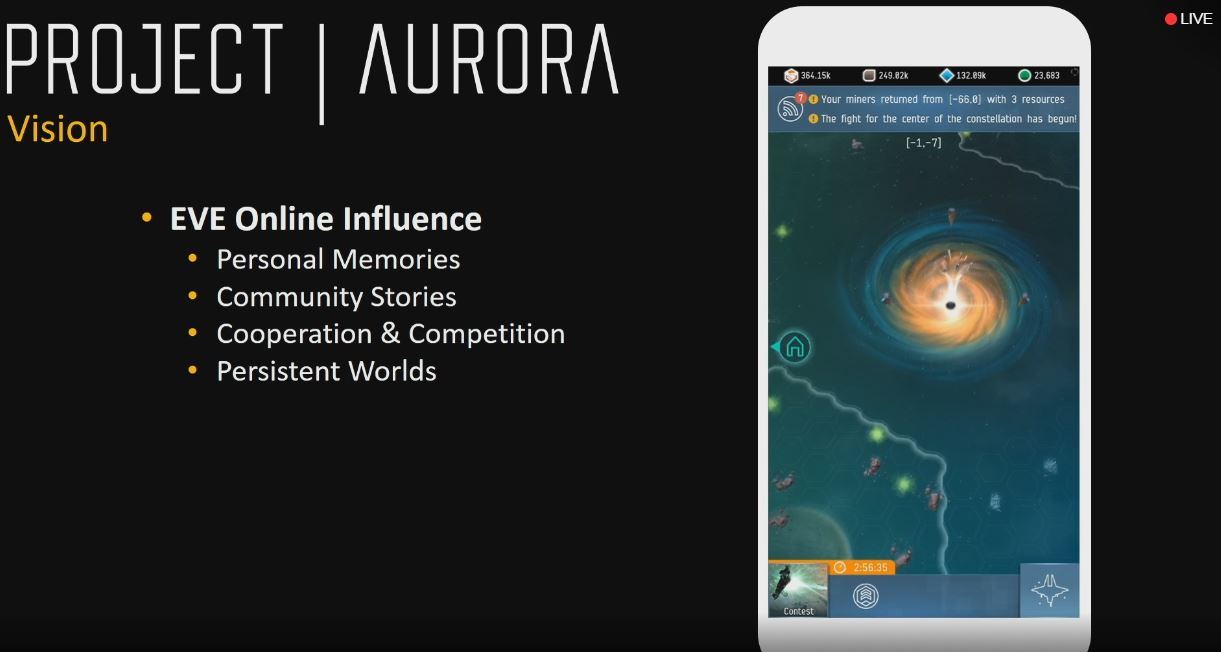 And with that, EVE Vegas moves on to the pub crawl. We’ll be back tomorrow with coverage of the sessions from EVE Vegas. The CCP stream schedule for tomorrow is below. 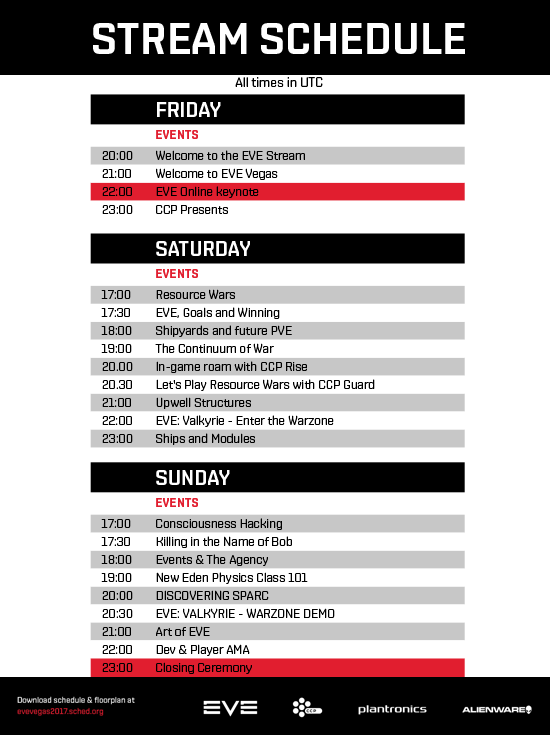