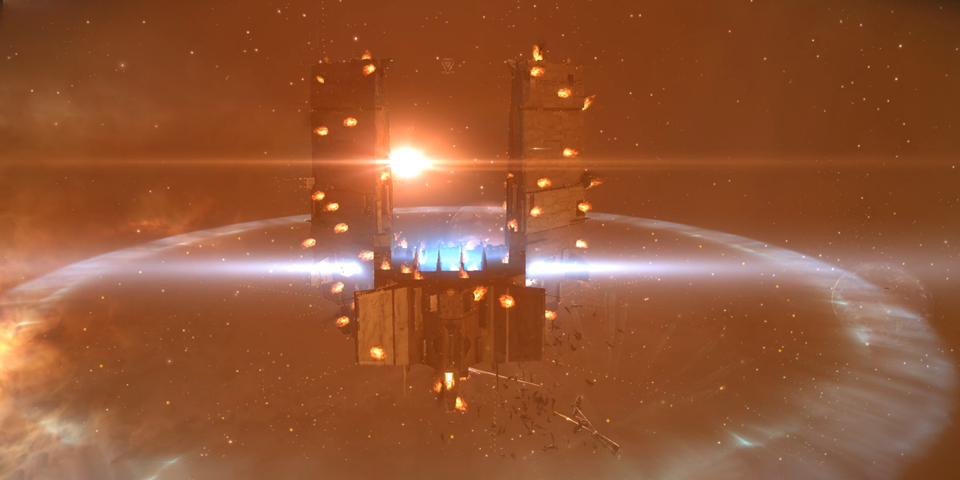 Hard Knocks Inc. showed a glimpse of their wormhole dominance this weekend, as they obtained the first Keepstar killmail inside of a wormhole.

Inner Hell  must’ve been proud when they got their Keepstar anchored in J1350331, a C6 Magnetar Wormhole. They used it as a solid base for their many wormhole activities for some time. Unfortunately, that new Keepstar smell could only keep them around for so long before many of their members had to acknowledge their real lives and go on summer vacation. With Fortizars and Astrahuses cropping up all around the ill fated Keepstar, the few active members from Inner Hell who weren’t on summer vacation must’ve seen the writing on the wall.

The thing with killing a Keepstar (or any citadel for that matter) in WH space is that the defenders don’t have a whole lot of time to rally the troops. Unlike in known space where you have about a week to get your defenses shored up, WH space gives you a whole 2 days before you’re on the last timer and kissing that Keepstar goodbye. With most of Inner Hell’s player base being relatively inactive this weekend, Hard Knocks picked the perfect time to swoop in and destroy the Keepstar with minimal resistance. As a matter of fact, once they had reached the third timer somebody from Inner Hell transferred ownership of the Citadel to a corp named Free Space Explorers. This was likely in an effort to both keep the Inner Hell killboard green, and to get a fancy killmail on their killboards.

This was probably one of the quicker Keepstar kills, not only because of the lack of defense from Inner Hell, but additionally due to there not having been a single bit of TiDi the entire time. The attack seemed to have mostly been done by carriers who dropped their fighters on the Keepstar, and then warped to an Astrahus or Fortizar just within range and tethered up. Throw a few dreads and bombers into the mix, and you’ve got a Keepstar down in the span of about an hour. Rumours flew around that there would be a chance of the Keepstar’s loot causing some trouble with the servers as well. Since citadels inside a Wormhole don’t have the luxury of Asset Safety sending your items to a station, everything just gets punted out into space in cargo containers. The servers did seem to manage without much trouble though, and looting continued on for quite some time after the kill was completed.

We’ve reached out to a representative from Hard Knocks for further comment on this dominant display of force in WH space, and will update when we receive word from them.

UPDATE: Braxus Deninard of Hard Knocks has provided this statement:

“I always talked about wanting to kill the first keepstar in w-space ever since they were introduced, and a lot of people talking about how it can’t be done only spurred us on further. When we ship scanned it and found out that it had the T2 DD rig worth around 500-600b is when I made the call that we were actually going to start planning this seriously.

“As funny as it would be to drop our own Keepstar in the spot of the old one, we have no intention to drop a Keepstar in a hole that we don’t live in.”