Announced in a devblog published on September 1, in the coming months Upwell structures will see changes designed to make structure ownership more meaningful, as well as provide additional consequences for both attackers and defenders. As part of a series of updates starting on September 8, 2020, players looking to deploy or continue using Upwell structures must use a new ‘Quantum Core’ item. There will be a core for each different structure type and size, ranging in both physical size and ISK cost. 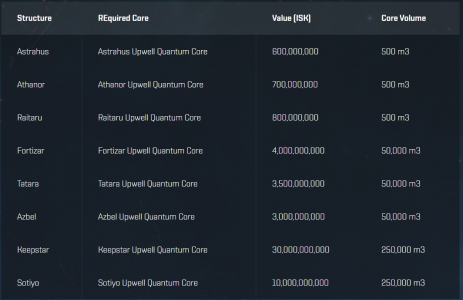 The various Quantum Cores for all existing structure types

What Does This Mean?

Under current mechanics, after a structure has completed its anchoring phase it enters a fifteen minute onlining window, during which it is vulnerable and can be killed. Afterwards, the structure onlines and the armour and shield mechanisms kick in. Services can be installed to provide the ‘full power’ mode, as well as weapons, utility mods, and additional tank modules.

Starting in October, CCP is requiring an extra step – the installation of a Quantum Core. Under the new format, once a structure has competed its anchoring phase a pilot will need to return to the structure and insert a Core into a dedicated bay within the structure. This will then start the onlining timer. This means that players need to be around to place Cores, or otherwise risk losing their structure before it onlines. Additionally, once a Core is placed into a structure, it cannot be removed manually – the only way to remove a Core is to unanchor or destroy the structure. The Core will be a guaranteed loot drop, providing a reward for attacking forces who make a structure kill, alongside any addition loot.

According to the devblog, the Cores will initially be released on Tranquility on September 8, through NPC sell orders from a select list of NPC Corporations who are members of the in-game Upwell Consortium. The full list of NPC corporations selling Cores is Ducia Foundry, Eifyr and Co, Chemal Tech, Propel Dynamics and Outer Ring Excavations. These corporations will sell Cores as finished items to players, and a different set of corporations (Modern Finances, Amarr Trade Registry, Bank of Luminaire, Pend Insurance, and Garoun Investment Bank) will buy Cores back from players who wish to cash in on any Cores they own. At the same time, existing Upwell structures will see the Core Room added as an accessible section of the structure storage bays, so players can begin installing Cores in their critical structures.

INN’s own Galaxier has also done some analysis of these proposed changes over on his Youtube channel, and you can check it out here.

How do you think this will shake up the structure meta in EVE Online? Will future structure spam just be followed up with cores, or is the price increase going to be a hurdle? Let us know in the comments below!