Elite Dangerous is a much deeper game than its beloved classic ancestors. The market, hulls, and modules all combine to give modern players all the bells and options they have come to expect in a video game. This applies more to the game’s mining aspect than any other facet. Mining in the original Elite was, for all intents and purposes, impossible. There was nowhere to reliably find rocks to mine and then even if you did find one and happen to have a mining laser, the yielded minerals were nearly useless. Compared to trading or just flying in an anarchy system and blowing up Asps and Anacondas, it wasn’t worth the time. While it isn’t as profitable as rare trading, mining in Elite Dangerous can be rewarding with the right equipment and a bit of know-how.

The first and most important step in starting your career as a miner is learning about the required equipment. While any fresh pilot in a sidewinder can go out and hunt rocks, there is a minimal level of equipment before it becomes efficient.

At its most basic, all you need to do mining in any hull is equip a mining laser (small hardpoint), a refinery (an internal piece of equipment ranging from class 1 to class 4), and cargo racks to put things in. Savvy miners will also want to fit a collector limpet controller and a shield generator.

With a couple hundred thousand credits, a Hauler can meet these minimum requirements. However, it is far more advisable to use the Cobra as your first mining craft. The Cobra’s medium hardpoints allow for some solid defensive weaponry in addition to a pair of mining lasers, and there is enough internal space for a class 4 refinery. 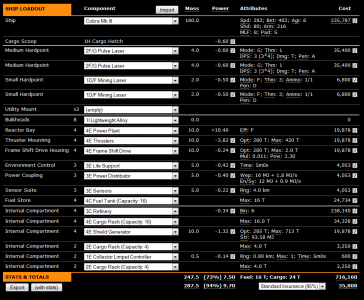 MINING LASERS: BRINGING A GUN TO A ROCK FIGHT

Mining lasers are fundamental to mining, and come in small (class 1) and medium (class 2) sizes. However, the medium miner offers no real jump in performance compared to the small mining laser. This may change in the future, but for now just stick to the smalls. If you are using the Cobra, use the medium hardpoints to bring your weapon of choice.

With the release of Powerplay, the drones (called limpets) in Elite: Dangerous has become much more useful. The update has improved the lives of miners a thousand fold. There are two types of drones that miners can deploy: Prospectors and Collectors. The problem is that the drones take up cargo space, are one use only, and have a limited lifespan based on the quality and class of the controller they are launched from.

The Prospector drone, allows players to scan an asteroid and see its composition, along with how much harvestable ore is left. Unfortunately, prospectors are currently buggy and have trouble moving between rocks. Shooting an asteroid with mining lasers will give you a good idea of its composition very quickly.

The Collector drone is a different story. These little guys are vital to making mining efficient enough to be worth doing. Prior to Powerplay, miners had to collect individual asteroid fragments manually, which required a lot of skill, patience, and most of all time. With a collector controller, you can just send a drone out, which will happily gather asteroid chunks while you busy yourself with mining. No getting your hands dirty required.

The final piece of the puzzle is determining how many drones to take with you. The class and quality of the controller determines the lifespan of each drone, and a bit of math tells you how many you need to buy in order to stay out for a given time. For example, a class 1-E controller gives 300s life time. If you wanted to stay out for an hour, you will use up about a dozen drones.

As a rule of thumb, larger controllers let you fly more drones at a time (up to 4 from a class 7), and higher quality improves the lifespan and range of the drones.

A final note on collectors: they will die if you fly beyond their control range. While they seem to keep pace with your ship when they’re idle, odds are you will kill them if you fly away while they are still collecting. It pays to stay slow until they are done.

Don’t forget to open the cargo scoop, which is bound to the ‘Home’ key by default.

The final piece of the miner’s kit is the refinery module. This is the one place where buying the biggest and best you can lay hands on really will pay off. Once a collector brings a chunk to your ship, it will load it into the refinery hopper. The refinery can be accessed in the cargo tab. The hopper will show the minerals in the chunk (almost always 2) and the player can select one or both to fit it into a slot. The refinery then transfers the rock’s percentage value into the bin. Once a bin fills up to 100%, it is transferred directly into cargo as one ton of the mineral or metal.

When the refinery’s bins are full and a new chunk comes in, a player must then choose to keep their existing percentages or vent one to make room for the new type.

This makes the number of bins a refinery has the most important aspect. These vary by both quality and class, so a wise pilot will shop carefully. For example a class 2-A refinery has 6 slots where as a class 4-D only has 5. But for half the price, a class 4-C has 7 slots to that class 2-A.

The final and arguably greatest challenge in being an efficient miner is knowing where to go get the most valuable rocks. The price per ton can vary from as low as 50cr to as high as 35,000cr. So knowing where to go can really make a big difference in your profits.

The first mistake players make is going to the asteroid belts they see in the system map and navigation panel. These are a red herring filled with low value rocks and minerals. Instead, find your nearest gas giant planet with rings in the system map. There are 4 types of rings with varying yields. 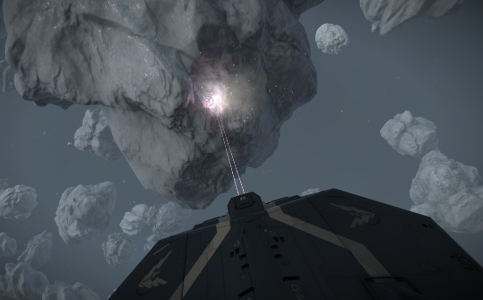 A number of ‘Resource Extraction Site’ or (RES) will appear as players fly closer to the ring. They come in three types which describe the size and strength of the pirates that spawn in them. However, these are also a red herring. While a high intensity site can give a player a great deal of challenge and a lot of valuable targets, as in EVE, a miner needs to keep their focus on shooting rocks not shooting the belt rats.

A simple way to avoid this is to fly to the ring you want, slow to a stop, and drop out of super cruise. This spawns the pilot very far away from the RES beacon and minimizes the chance of a pirate come by. Additionally if the planet has multiple rings you will need to be able to drop out of cruise manually to get to the right ring as they are often very long distances from the RES beacon.

While there is a Powerplay faction that has a reward for a mining laser that can double as a pulse laser, at present the mining itself does not appear to build anything in the way of standing perks. It is notable that Zemina Torval has risen to the second most powerful faction place. And while mining for yourself provides a modest steady income, adding mining and refining missions to the equation can boost the cr/hr significantly. If you are building up your standings with a local faction, look out for those missions as the reward is very good compared to the effort.

Overall, trading rare commodities will make money faster. There is more risk and a player needs to have a much better plan, but the time between payouts can be significant. Mining can still make appreciable sums. If you remember from the rare guide, with an Asp I was able to pull in about 800 thousand to 1 million cr an hour doing Lave cluster runs. With the same hull loaded for mining, I was able to bring in over 500 thousand cr in the hour spent. But it required far less attention on my part. If you you want a change of pace, mining can be an effective break without hurting the bottom line too much.

NOTE: This article was originally published by Froggy Storm over on themittani.com