CCP released a devblog today, July 19, to give out more information about the moon mining changes coming this winter.

The blog reiterates what we already know about the moon mining. Each moon can only have 1 refinery on it for extraction at any given time. The time from starting up the refinery to extraction being complete will be up to the initiator and can vary from one week to several weeks.  During this process, chunks of moon leave the surface and travel towards the structure. This is visible to observers. Once the chunk reaches the structure, it can be detonated to form an asteroid field. This is then open for everyone to mine.

So far, so what? This is not news.

However, the next sections contain new information for us:

There will be new ores coming with the changes, 20 of them. They will come in a variety of rarities, and will be composed of current moon materials (Dysprosium etc.) as well as normal minerals (Mexallon for example). Yep, you read that right, normal minerals will be in the new moon ores. All the new ores will have a mix of materials in them.

As well as the new ores, they are resetting the composition of the moons themselves.  There will be a randomized algorithm applied to the moons for their composition on patch day. New distributions will be tested on SiSi, but they will not be the same as the random seed used on Tranquility. This means that your cluster of Dyspro moons may suddenly turn into something very different.

The new moon belts will have a variety of ores in them, which you discover by surveying the moon. In the devblog there are some examples given. The examples are of a moon showing 45% Scordite, 40% common moon ore, and 15% moderately rare moon ore, or 35% Spodumain, 25% moderately common moon ore, 20% Bistot and 20% extremely rare moon ore. The granularity on moon values is higher than under the present system, and, as you can see, there are now standard ores in the mix.

They are revamping the moon surveying process to make it more accessible. 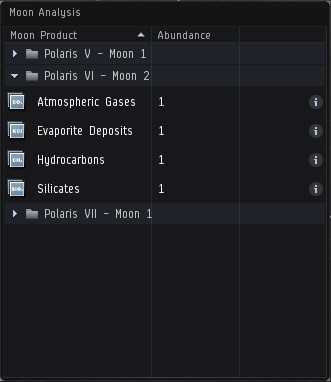 Above: The current moon-scanning interface. Below: the updated interface. 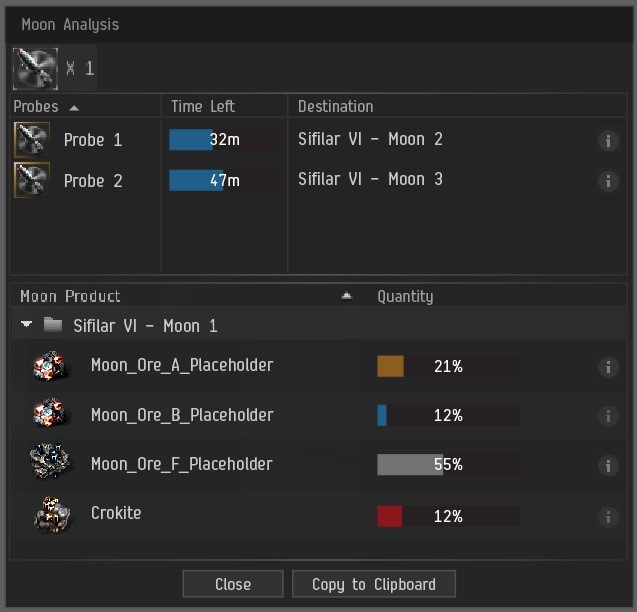 The implications of adding standard ore and minerals into moon mining remain to be seen. It could be that moon mining diverts miners from Ore Anomalies and Asteroid Belts, so the minerals and ore in the new moons will compensate partially for that.  It could also be that the influx from the moons depresses the price of minerals further.

The reset of moon compositions on patch day is going to cause a lot of upheaval. Moon composition has played a large part in the value of a holding a region, and that may all change on patch day. Also moon mining is now a free-for-all, with the possibility of dropping structures where you don’t hold Sov to block moon access for your rivals for the week that it takes it to online. Once moon extraction has been done, it will need to be actively mined, giving Rorqual-hunters the potential to disrupt acquisition of moon materials. How much moon mining takes place under the new system remains to be seen, but moon materials are the basis of Tech 2 production. With the reset on patch day already likely to cause a spike in costs while the new operations are set up, if fewer moons are extracted under the new system, we could see a jump in T2 prices.  On the other hand, if people abandon anom-mining to move to moon belt mining, more materials may come onto the market.

Which way prices move hangs on how players feel about the new system once implemented. Too much disruption will make it not worth the effort, but quiet locations could be a goldmine, until someone else finds them, of course!

Check out the devblog for full details, but it looks like winter will be a rocky time throughout New Eden.