The Agency Event: Go back to the Farm

The new event called “The Agency” was launched this week. It takes all the redeeming factors of the Shadow of the Serpent event, and then bashes you over the head with the baby rattle of poor execution. Unlike its predecessor, which had loot crate goodie boxes that you could reach at your leisure, this new event actually punishes you by not allowing the player to progress in a timely manner. Instead, it forces the player to log in to complete all six tasks every day if they want to get to the end before the event is over. 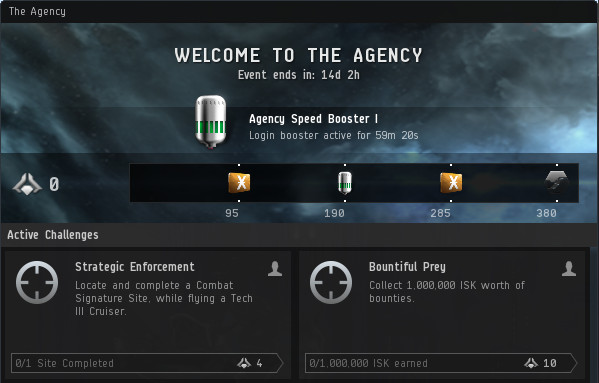 Potentially CCP was going for a “log-in incentive” such as when they tried giving people 10,000 skill points for killing their first rat of the day.  That would explain the booster effect initiated on the first character to log in on that account each day. But if that was what they were going for, then the rewards are a little lackluster. The UI has already confused multiple casual players, as it requires you to actually hover your mouse over the PLEX icon along the progress bar. Only then does a pop up show that the first reward is a single PLEX, and the third reward is five PLEX. The numbers immediately below are the number of progress points required to reach that reward.

It will take any individual account about ten days (with three to spare) to get to the Tengu skin, assuming they started from launch. That is assuming you are not completely demoralized by the fact you only get 6 PLEX, a booster, and a skin that may or may not fit your taste. Not only that, but some of the event requirements force the player to actually scan down sites in a certain ship, then go on to complete the site they scanned down with that same ship. Other tasks may require the player to use a Tech 3 cruiser, automatically locking out Alpha clones from completing their first day’s objectives.

Previous events spawned a beacon for you to fly to. While this may not have always been efficient—most events turned into a grind fest—it would generate PvP content both in highsec as well as lower security space. The random drops gave people something to fight for. Even if these events had particularly low-end rewards in bulk, they usually came with a temporary booster to skills. Not only did this random element add flavor to the event, especially when running with friends, it could be a genuine way to make ISK for some opportunists.

The “Shadow of the Serpent” event was a deviation from the norm, and “The Agency” is obviously trying to recreate that experience. However, this new event actually forces you to wait 24 hours until that task slot becomes open to progress further. I really enjoyed the Shadow of the Serpent event and saw genuine potential in its mechanics. Sure, it was broken, but it definitely made a novel effort that could have been easily improved upon.

However, they made it worse. This event does not live up to the user-friendly mechanics of any of the previous events, and it disincentivizes the players to complete the event along with the poor rewards. We don’t even know what the Agency is. Are we working for CONCORD? The Sisters of EVE? Upwell? What does it do? What is the purpose of this event short of something to do? Pointless is a big word coming to mind here.

I almost feel that CCP didn’t want anyone to notice the poor execution of this event. Or that they felt they didn’t have to try because the new Project Discovery exoplanet minigame is actually really cool with nice rewards. Whatever the reason, this event seems to be dead on arrival. They did not do anything to actually improve the mechanics of the previous events, amped up the difficulty of accomplishing these tasks, and used a shriveled up carrot tied to a stick to try and get us to like it. Most players will likely ignore this event entirely, resulting in the few masochistic souls who made it to the end selling the Tengu skin for a lot of money.

We shall see if CCP’s Livestream at 19:00 on July 20th reveals anything different, and proves me completely wrong. But until then, I am very disappointed.