Over 60 Rorquals died in Fountain today during an Imperium Locust Fleet, killed by a dreadbomb from PanFam and friends. INN has received claims taking credit from Olmeca Gold, Chossuh, and the recently-purged Pittsburgh2989. This is the first time an Imperium Locust Fleet has been targeted in this way, costing the Imperium upwards of 460b ISK. Opinions on the significance of the attack vary, with some calling this a major set-back. Others consider this a long-overdue opportunity to pique interest in the supercapital cover fleets.

Jay Amazingness, one of the Imperium FCs, offered praise for what he says was a well-done drop. However, he also felt dreadbombing a Locust fleet, which had not been contested for over two and a half years, was long overdue. Once the call went out for assistance, the Imperium response fleet titans went in and spread their Doomsdays by name first followed by target calling for guns. Supers were held back due to another drop taking place. After the second drop turned out to be less serious than the first, supers were used to help clear the field as well as providing tackle on the enemy Dreads which were exiting siege by this point.

On the subject of SRP, I was told by Jay that TheMittani had spoken on Mumble and said that something would be done to get lost Rorquals back in space. One last comment from Jay. He welcomed the attack today and welcomes all future attacks as they give line members new experiences 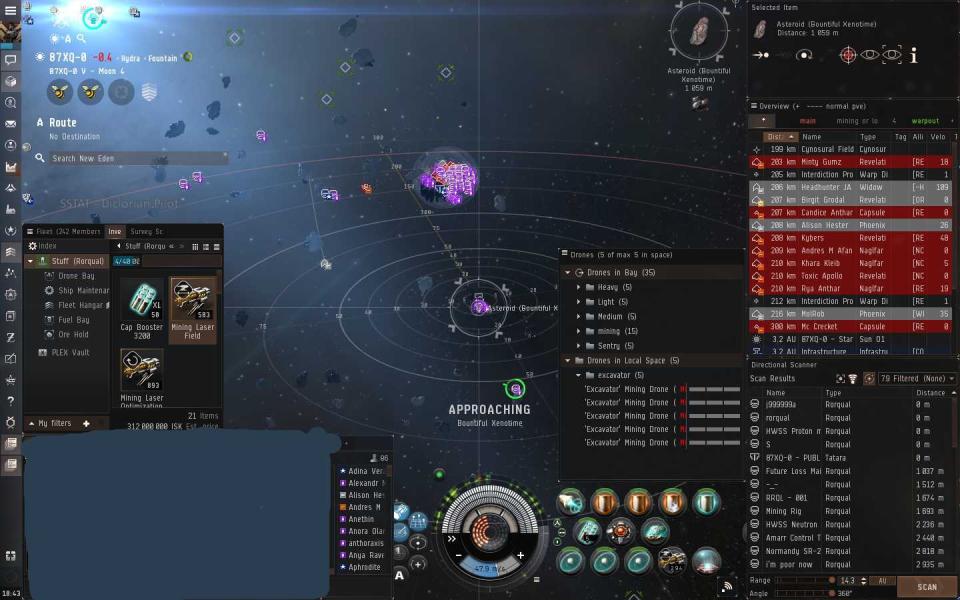 Chossuh (CEO of Capital Fusion and leader of the Mobile Clown Unit (MCU) sig in Pandemic Horde that specialises in dreadbombs) told us that a few weeks ago Pittsburgh came to him and told him that Locust fleet was susceptible to a dreadbomb. He began collecting together various interested parties; Gang Bang Team, MCU (Know Your Role,  Burning Napalm and WAFFLES), VoLTA, Trigger Happy, BLOPSEC, We Want Your ISK, Blank Space, LowSechnaya Sholupen, Pandemic Legion and Free Range Chikuns.

They began quietly moving dreads into Fountain over a couple weeks, getting specialised fits together to deal specifically with the Locust fleet, and got to planning exactly how they wanted this drop to happen. After a week or so they had a pretty solid plan together, and tonight all the elements came together to allow this to be pulled off.
Everyone said it wasn’t possible to dreadbomb the Locust fleet so that encouraged them to give it a shot, and it worked spectacularly.

Olmeca Gold CEO of Free Folk, and a prominent member of Delve Pest Control Inc. (DPCI), a Discord group of people who like to kill things in Delve, had this to say:  “So DPCI  for a long time wanted to figure out a way to hit the Locust Rorquals someday. Pitts getting kicked opened up a source of insider information about the exact ways things work, as he FC’d locusts as well. I understand now several people including me offered him to work with regular people who do things in Delve, like DPCI. He got in touch with us. We decided to utilize his intel. Chossuh from CAPF (also one of the leaders in DCPI) took over the leading position and did the legwork to organize everyone else. We brought in several people/entities together to do all kinds of work that this kind of an OP requires. Many parts came together and also with a lot of luck it went well.”

Speaking with Pittsburgh2989,  FC for Trigger Happy, he told me that they used a bait cyno within the Locust fleet. Due to how lax the Goon FCs are with checking cynos, when miners jumped to the cyno expecting moon rocks they found themselves trapped in bubbles surrounded by dreads, with exits camped it was light work killing the dreads.

As a last comment, I was told by Pitts that this “All triggered from having wasted six years of time with Goons to just get purged for dreadbombing neuts, Pittsburgh sends his regards. I’ll see you on future locust as well.”