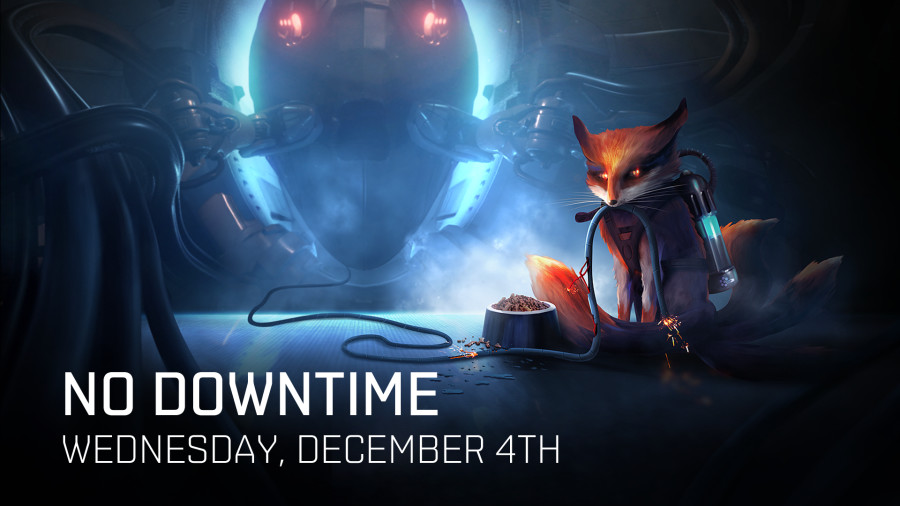 On Wednesday, December 4, EVE Online will hit an incredible achievement for the first time ever: there will be no daily downtime or server reboot. This was announced by CCP Explorer in a devblog late on December 2, where CCP really focused on the details about why daily downtimes exist and the specific choices for downtimes in EVE Online. This is presently a one-time event intended to give CCP far more data about how server downtimes (or lack thereof) impact the playability of EVE Online.

The reason for daily downtimes at 1100 UTC date back to the very start of EVE, when the servers were situated in Reykjavik, Iceland. In those early years, server downtime regularly took hours, and significant releases could take the servers out for days at a time while CCP fixed serious and not-so-serious issues. “Set your skill queues” is a meme for a reason.

There is a small consolation for those individuals who live in parts of the world still active at 1100 UTC—Australia and Asia primarily, along with very late US and very early EU players. In the devblog, CCP Explorer takes a deep dive into timezone analysis and why daily downtime still occurs at 1100 UTC. Personally, I believe that server locations still impact the reboot timing (London is where the servers exist, and 1100 UTC is in the middle of the British business day), but the devblog states that CCP are constantly looking at when the right time to reboot occurs, along with some data to reinforce that.

The “Atlantic Downtime” (roughly 2300 UTC) is positioned between the end of EU time and the start of US time, but enough players cross that period that a server shutdown would be significantly disruptive to all areas of EVE. Next up is “Pacific Downtime” at ~0700 UTC, which sees a noticeable break between late US and early AU timezone activity, commonly referred to as ‘Ghost Timezone’ by players. The information provided by Explorer shows that CCP are well aware of their player involvement times, but the server reboot timings still work out to ~1100 UTC as a good compromise for the global playerbase. If you live in areas that are reallly disrupted by downtime at the moment though, be assured that CCP want to pay attention to your area!

At this point, I would be remiss if I didn’t repeat that this is a one-time occurence for the moment. We aren’t immediately looking at a new paradigm of no-downtime EVE Online. In fact, this isn’t even a precursor to a lack of daily downtime. CCP Explorer goes out of his way to claim that this is a one-off experiment to ascertain which parts of CCP’s backend might collapse under the weight of CCP’s downtime server requirements, and which processes will march on undeterred.

CCP are ready to perform an emergency reboot of Tranquility as necessary during the course of this no-downtime experiment. This is a wash of “dirty laundry”, testing every part of the game—including the aspects that aren’t expected to go wrong.

CCP are closely watching their actions over the next 48 to 72 hours. Given that these changes have been foreshadowed by a failure of CCP’s chat servers as hosted by AWS on December 1, many players are not hopeful. Either way, the test data will provide CCP with a fantastic update as to how the servers can tolerate extended usage.

Here at INN, we will look to bring you any updates to this test as it happens.