Deep into the region of space called Delve, an Imperium recon scout spotted a vulnerable space mining fleet. The massive barges painted with splattered blood. They were Blood Raiders, a cult known for harvests human blood from anyone they captured. They are active all over Delve and neighboring regions, but not as miners.

Raiders are considered “kill-on-sight”, mining or not. An Imperium fleet warped in at close range and made quick work of the mining barges. The powerful explosions incinerated the cult members within the hulls of their ships. Bright light gave way to imploded hulls, wreckage that seared seconds before it froze in cold space. The gnarled remains of some miners floated by, their pained expression fixed forever. They bumped off the Imperium fleet commander’s ship as he transmitted to HQ, “PAPS entry 29E3: Raider barges down in LWX-93.”

Seconds later HQ replied, “What?! We need to follow them to their Sotiyo shipyard where they are building their capital ships. You can’t follow frozen corpses. Locate barges and follow them, alive.”

The Blood Raider shipyards are capable of building enormous capital ships. To protect themselves they are hard to find and can defend themselves against capital fleet assaults, even from multiple directions.  Once discovered through scouting, these shipyards can be sieged over a period of 2 days. If successfully destroyed the wreckage contains a blueprint of immense value. Destroying them takes hundreds of players working together, all working for that one blueprint.

Corporations of from the Imperium spent hundreds of man-hours scouring their territories, following mining barges until they finally came across the massive shipyard. The cult leader of the blood raider, Omir Sarikusa, sent an ominous message to the invading forces.

The shipyard was destroyed, but the valuable blueprint was stolen by pilots from a competing faction.  Their fast interceptor class ships jumped on the loot and grabbed the prize but were destroyed before they could escape.  The result was no winnings for anyone involved.

Days later another shipyard was found and assaulted. Before the final battle, fleets from neighboring factions started to assemble to get their chance to snatch the blueprint. Instead of going forward and destroying the shipyard, it was decided to stand down and let the structure repair itself. Thieves were around.

On June 3rd the shipyard was again attacked and destroyed, but no blueprint was found by anyone in Imperium’s fleet. The FC’s were furious that the difficulty of assembling hundreds of pilots in a cooperative mission yielded nothing of value.

You can hear their reaction minutes after the event on Talking In Stations podcast on June 3rd.

During the show, it was reported that that loot did drop in the shipyard wreckage. What followed was a discussion about loyalty to the alliance by the player pilots involved in doing the work to bring down the structure. Would someone steal it for themselves at the risk being excommunicated from their compatriots? 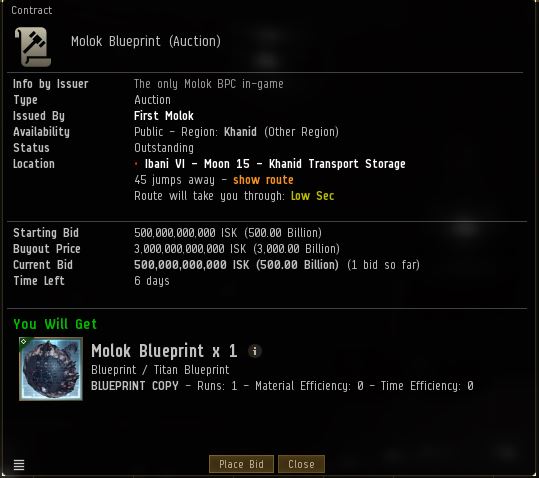 The day after the successful assault, an auction went up for a Molok blueprint, a Titan class Blood Raider ship. The blueprint was stolen from the fleet that destroyed the shipyard, either by a member of Imperium or a competing faction. Whoever took it did not alert their leadership and smuggled it back to Empire space to put it up for sale using an anonymous account. Loyalty has a price, and The Imperium was outbid by the prospects of massive personal wealth:

math by deltaxi65 of Initiative

If you want to use real US Dollars to buyout this blueprint, you would need to buy nearly $39,000 worth of EVE money (ISK). Considering the types of players that exist in EVE, if it happened, it would only be slightly shocking.

The Imperium has now lost two prized blueprints, and this lucrative shipyard appears to be nothing more than a poacher’s paradise. Attacking the impossible-to-kill shipyard turns out to be the easy part; the real challenge is how to acquire and divide up the spoils.

A high command transmission came through to Imperium fleet commanders. “New orders. Blockade the Shipyards. No one gets in or out alive.”

Intelligence officers are searching for the identity of the thief.

From a gameplay perspective, this high-end NPC feature is facing some real challenges, in unexpected ways. At first, the shipyards seemed unbeatable. The artificial intelligence of the system would make NPC’s behave like actual players, warping around tackling players, and escalating firepower as needed. These tactics took out some conventional fleets, but the system didn’t adapt to low tech attacks.  Hundreds of small T1 frigates were able to disable and destroy the structure – death by a thousand pinpricks.

That’s when the real problems start.  Looting the structure is easy for anyone in the area, especially interceptors that are immune to bubbles. They can get in, grab and get out fast. Whoever took the second round of loot was so fast it went undetected. FC’s thought no loot had dropped. Maybe disco (smart bombing) battleships blockade exit gates, but an interceptor pilot would simply need to warp off and log out. Waiting for a good day to return and escape.

CCP probably wanted the loot to be a high value, singular drop, and stealable to create conflict gameplay. The dominant force would have to fight a difficult NPC, fend off others, and repel thieves, but even if they did all that, the high-value loot is too tempting to pass up for a lowly member of any fleet.

The Imperium decided to change tactics and fought the game design by holding the Blood Raider game feature prisoner. Instead of trying to extract the wealth, they have vowed to kill anyone trying to get it. CCP is in an awkward position now. The feature needs to be iterated on but cannot be if no one is using it. If the create a loot mechanic that discourages interceptors from stealing the blueprint, players would say CCP is giving into Goonswarm complaints. On the other hand, if they don’t there won’t be any progress for this feature. In a very meta-game way, Goonswarm has taken CCP hostage.

If asked, CCP says they build the game in a way that not even they know how it will turn out.  Players surprise them all the time, but I am not sure this is what they had in mind – development slowed down by players.

Perhaps when this feature expands to other parts of EVE the blockade will be broken as others alliances try to farm these shipyards. It is unlikely any attempt to farm these will go unchallenged by Imperium spoiler fleets.

Late today, information came from SiSi that the BPC will be in container that is 20k m3, so is unable to fit in anything smaller than an industrial.  This makes it likely that the BPC currently on contract will be the last one to be taken in this manner, and perhaps reduces the value of the contract.