Good evening, and welcome to our coverage of the final timer at the Blood Raider Sotiyo in E-DOF2.

To recap what has led up to the timer tonight:
Just over a week ago, the Blood Raider Sotiyo was added to Tranquility.  This came in with the patch on May 9, but because the Blood Raiders had to build their Sotiyo, capsuleers were first able to hunt for it on May 11.

Due to problems following the hauler rats, it took until May 12 for the Sotiyo to be located, in E-DOF2 in Period Basis.  It was found by members of The Imperium incursion sig, but, due to it being in Red Alliance space, they left it to the sov holders to attack.  The first night saw a Rattlesnake fleet lost to the Blood Raiders as well as a TEST fleet of bombers and tactical destroyers being destroyed. May 13 saw an attempt by streamer Jebi Vjetar to assemble a fleet of Succubus to speed and signature tank the rats, unfortunately, he was not able to amass the 50 frigates required.

Finally, on May 18, The Imperium launched an attack using Punishers, and this attempt was successful.  The Scope covered the event today, with a statement from the leader of the Blood Raiders.

That brings us to tonight, where at 2116, the structure becomes vulnerable.  Unlike normal citadels, there are only two timers on the Sotiyo, so if there is a successful attempt tonight, the structure will be destroyed, giving the chance for a faction blueprint to drop, as well as other Blood Raider loot.

We will keep you updated on the event as it happens, and you can follow over on INN Twitch where Dodkalm is streaming the event. INN photograph Rose Knightley is also on the scene.

2117: Test have engaged Goons with a T2 frigate fleet, the repair timer is paused.

2122: Timer is still paused,  Imperium are focusing on shooting the Sotiyo in their T1 Amarrian frigs (used because lasers do not require reloading), while TEST continue to engage them with T2 frigates, there are also TEST Jackdaws on grid.

2132 Dodkalm has reshipped, and coverage of orbiting the structure while firing lasers can now continue!  The TEST fleet do not appear to be doing serious damage to the Imperium Fleet.

2136 Sotiyo is at approximately 90%, some minor TiDi is reported in local, and some Imperium pilots are ignoring instructions and shooting at TEST.

We have our first image from Rose Knightley of an Imperium Punisher under attack from TEST interceptors. 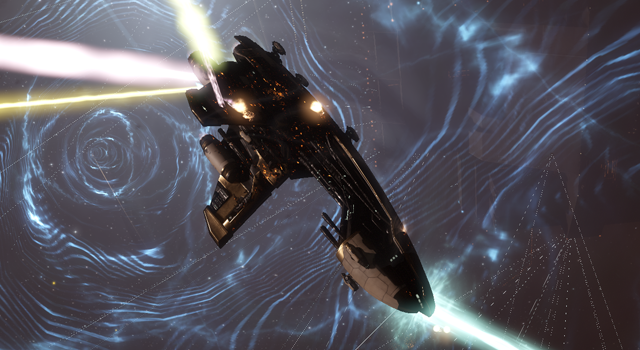 Another picture from Rose, of Tengus from BOPE. hanging back and watching the action 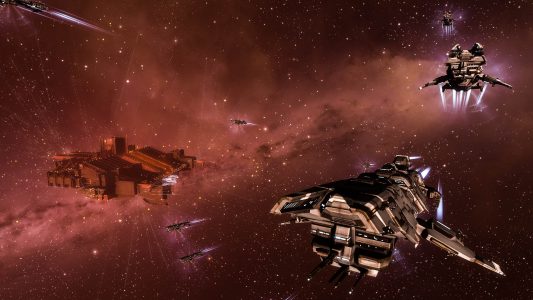 2150: Timer is still paused, more people are arriving in local, and rumours of an inbound Mercenary Coalition Fleet.  FC Jay Amazingness was unfortunately shot by TEST.

2155: We are over 50% of the way through the structure.  It looks like this won’t be the long night that people feared.

2203: 670 in local, structure at around 40%, TEST are bringing more pilots into the system, perhaps these will have more of an effect than the previous fleet.

2208:  Sotiyo structure is still dropping, Dodkalm is still riveted by the PvE experience, as is evident from his expression in stream. However, he may get a change of scenery soon, as he is under attack!

2215 It is almost down, around 10% left. Will the stock of Punishers in the station last until the structure pops? Will someone sneak in and loot the Sotiyo right under the nose of Imperium and TEST?

2217 The MC fleet has left system. Structure is about to pop. Both Xenuria and our very own Moomin have lost their Punishers. We hope they were able to reship.

2222 Sotiyo is down. Imperium fleet is now engaging hostiles.

2224 TEST pilot Hudders looted a Molok BPC and then got exploded. We understand the print did not survive.

Zkill has the kill, it is confirmed that the Molok print did not survive the explosion. 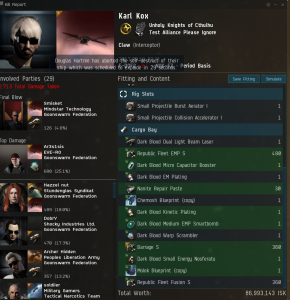 Killmail for the Sotiyo is now in too. 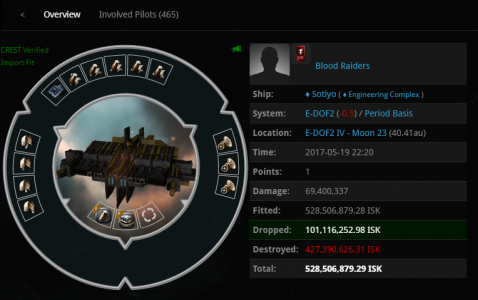