Following on from my first piece on the arms race update, I wanted to look into the impact of injecting a large number of ships into the market.

We will use market data from Jita, to look at the week running up to the event, the week of the event and the week afterwards. To see how the market anticipated, reacted and if it recovered.

For each of the 8 ships, we will look at the average price each week, to see how the market price was controlled by the event. We’re also going to cover the average order count and volume, to see how many ships of each type moved. All graphs apart from the three at the end of the article are from Fuzzworks.

Starting off with the Drake:

The average price of a Drake had been slowly climbing over the month before the event, hitting an average of 42.9m a few days before the event. As the event started the price dropped to an average of 37m on December 13 and stayed low for a few days till recovering to 41.9m on the December 19. Transactions spiked by 200 and broke 300 a day, 3 times during the event. In the following week, they dropped below 200. This is expected to continue as normal supply and demand returns.

For the Raven, the price was holding steady on the approach to the event. It’s price dropped sharply by over 20m during the course of the event and has not yet recovered. Like the Drake, the Raven saw heavy volumes of trading, hitting over 300 units a day in Jita alone. Orders in the week following the event were up on average. As traders snapped up spare ships on the market at the low price.

Already on a slow decline approaching the event, the Megathron was hit hard, losing over 20m off its average price in less than 24 hours. Orders and volumes spiked over 400% on some days as the market was flooded with the ships. Following the event, the price has rallied a bit but still been clearly affected.

The Hurricane, a very popular ship, managed to avoid a price crash. Its price held strong and only lost about 4% on some days, but in the week that followed went up in price. The market was very welcoming of this injection of ships, the Hurricane is used frequently, which is why the price remains unchanged. Even with orders and volumes doubling over the course of the event.

The Typhoon looks to be one of the least traded ships that we’ve looked at, it almost looked like business as usual during the week of the event, with the injection having little to no effect. December the 9th saw trading hit over 105 units, but apart from that, nothing else stands out.

The Harbinger is another ship which saw a few changes to its price, down 10% during the event. It saw five times the volume and numbers of orders during the week of the event. Which is odd as the price did not crash as other ships have. The average price has since recovered a little, as the remaining ships are absorbed into the market.

The Apocalypse has been an apocalypse for anyone invested in the ship. The ship had small quantities traded prior to the event. This changed during the event, with over 900% increase in average orders. The ships price tag tanked hard, losing over 20% of its average price, as well as crashing again after the event. For what market that existed before the event, has been flooded and I feel will take months to recover back to the level it was at pre-event.
Below is a series of graphs showing the sale price, volume and orders for each ship for the three weeks we looked at. 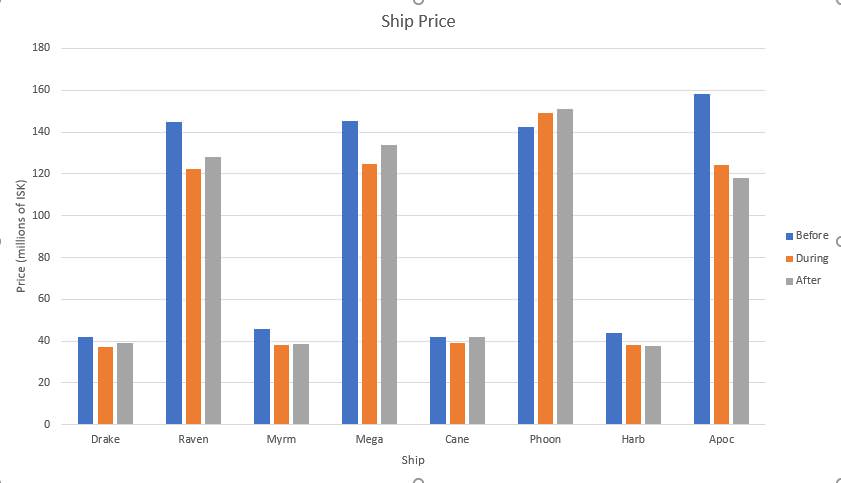 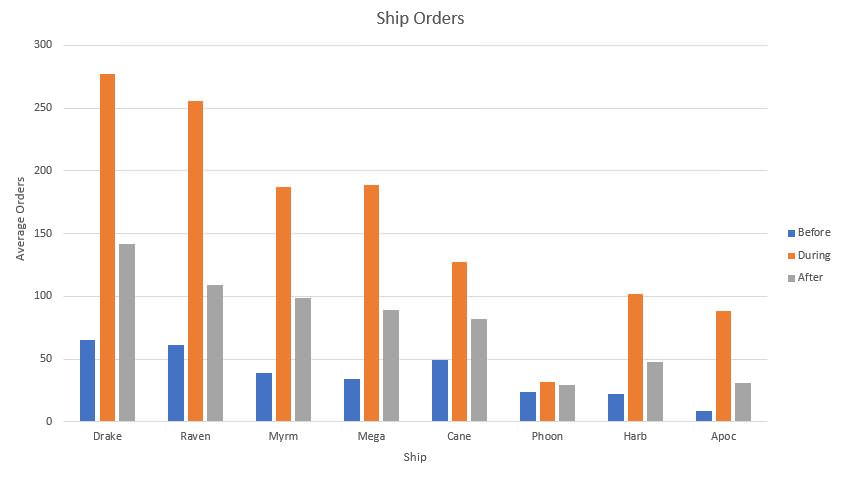 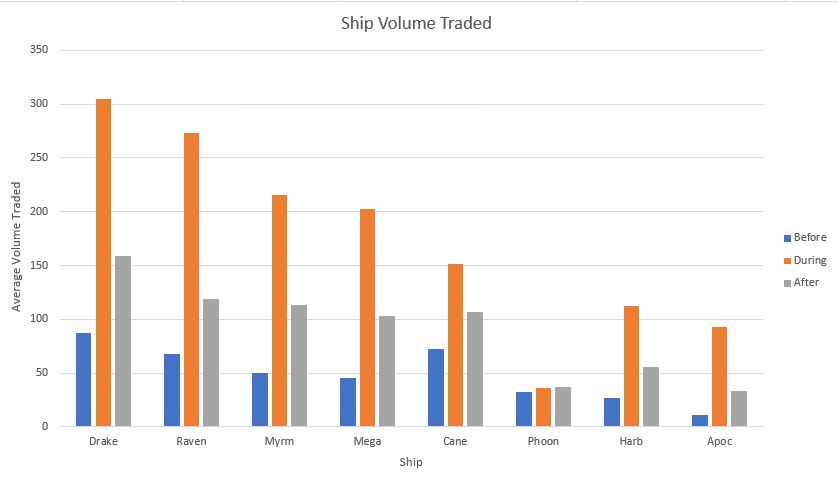 During my many years playing eve on and off, I’ve never experienced such a massive injection of items from CCP to enter the market from thin air. Normally, ships are all produced by players. The market data shows just how devastating an injection of ships like this can be on the market. For some ships, such as the Drake and Hurricane there was little movement and quick recovery. I feel that this is down to the ships being used in fleets and missing running. I also feel that a large number of these ships have been snapped up and will be slowly seeded back into the market as prices creep up.

Was the event a success? I would say so. Alpha players were able to get their hands on new ships and experience new ships which were now available to them. All at the cost of market stability. The markets should recover, but the last few weeks have shown that the market is fragile and outside influence can have damning effects.

It’s to be noted that as of 30th of December, the price of an Apoc is at an average of 132M, still 20m down from the average price on the 4th of December.