The Terror of Ignoitton: Four Days in the Life of an Impairor of Doom

As I have recently moved into an alliance with a high demand for Jump Freighter logistics, I have found myself doing frequent runs to Jita. Fellow JF logisticians can empathize with the amount of time spent sitting on a cyno with little additional use for the character. My JF route took me to the system of Ignoitton, a common Jump Freighter landing point for vessels coming from the southern and western regions of New Eden.

Ignoitton is an interesting case among such locations, however. Unlike landing points such as Jan and Pakkonen, Ignoitton’s stations are very poorly placed, and their use has been largely usurped over time by a mass cluster of citadels near the HiSec entrance gate – one of which I personally use. As a result, almost no cynos are lit near sentry guns.

In other systems like this – as well as midpoint stations along the route to such systems, cyno-poppers are fairly commonplace. These capsuleers are usually in large, high-alpha ships, often cruiser or above to survive the sentry guns. Ignoitton has had its fair share of them – at one point even CODE got in on the action. These people are usually viewed with contempt and disdain as killboard padders who only engaging in riskless pseudo-content. As a JF pilot, I had my own severe frustrations with losing countless cynos to a single-volley jerk.

This knowledge crystallized suddenly on a very interesting day, as I found myself waiting out my cycle at my cyno bookmark with another capsuleer’s cyno lit a mere 3000 meters from me. Playing as a cyno clone can be very boring, and with my civilian gun still fit to my ship’s other high slot, I stopped and wondered for a moment. After a quick laugh, I locked up the other cyno ship, and began to plink away with my peashooter. To my even greater amusement, the other ship returned fire with its own starter gun. The race was on, and 650 damage later, I emerged victorious in mid-structure.

The experience was unexpectedly exhilarating. It felt like a very real and surprisingly close fight. I genuinely didn’t known if I would win or not. The gears in my head started turning quickly. I reassigned another toon to be my main cyno lander in the system and moved them into position. Being a JF hauler, I set aside part of my cargo hold, and dropped off a side-load of Impairors and various low-cost mods on my return trip. The quest had begun.

Since I didn’t want to be yet another jerk popping JF cynos, I decided to impose a few rules on myself. For the most part, this was just how I wanted to go about it:

There were a few other restrictions: I couldn’t kill cynos lit on a station or gate since the sentry guns would kill either fit instantly. If the cyno was lit on a Fort or Azbel, I would need to be sure it had no point defense first.

I would have one fit for civilian guns, and eventually one for Polarized. The extra dps traded off for being even easier to kill, essentially being one-hit by anything aside from another corvette. 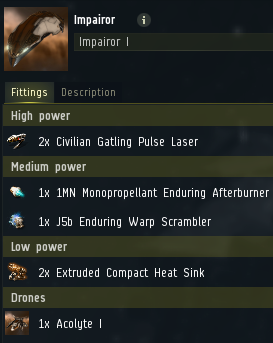 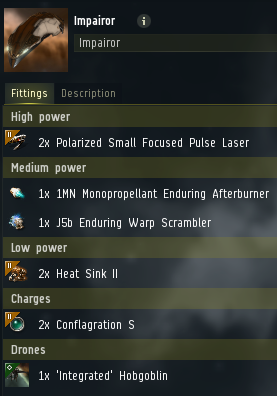 I started off strong destroying a T1 frigate, earning my first kill mark right off the bat. I quickly realize just how many cynos are lit in Ignoitton on a daily basis. After killing two more T1 frigates and a few corvettes, I find a cyno lit at an Astrahus off-grid, a few AU away. D-scan shows an Atron, and the promise of another kill mark sends me on my way. The Atron unexpectedly survives long enough for the citadel to lock me up and send its fighters out. Though pointed by Sirens, I heat my afterburner and abuse the Siren’s high-orbit distance and low-range point, managing to escape in half structure. I rep up nearby and try again. This time I’m not so quick on the draw when the citadel locks me.

I don’t believe the Atron pilot expected such a persistent little corvette, though. Not a minute later and I’m back to finish the job.

Having avenged my four-kill-mark Impairor and with success fresh in my mind, I find a catalyst on a nearby Astrahus. I lock him up and engage, but the time to kill is intense. His cyno manages to decycle, and I realize too late that I have forgotten to set keep-at-range on the ship. As his ship reaches 10% structure, he burns out of range of the scram and docks. My frustration is mitigated by a private convo from the pilot who conveys his respects and sends me 20 million ISK for my trouble.

My frustration running high, I take it out on a few more corvettes without incident until a citadel manages to lock me in time without my noticing. I quickly succumb to its guns and lose a kill mark.

I manage to get my revenge on the pilot and a few more kills. The Atron pilot from before lights another cyno which I attempt to kill. The Atron has fitted a buffer this time and I’m forced to warp off before the Citadel locks me. A few attempts of warping back and forth to get in damage prove fruitless as I discover an armor repairer at work. My Civilian guns can’t break the tank and I bail. I manage to get in a few more Corvette kills before the day is done.

The day begins with a quick series of corvette kills. I swap out to newly designed Polarized fit to kill frigates, and switch back to civilian guns once I’m docked up again. This trend leads me to kill four more T1 frigates, including a Maulus that had previously been taunting me for hours sitting tethered – which at one point I had even attempted to bump off only to find it had Q-Clicked and wouldn’t budge.

My kill mark count hits 8 and I’m riding high. A pair of corvettes have cynos out on a freeport, which I attempt to gun down, but a Confessor undocks and blaps me. In my overconfidence, I attempt to undock and smash the cynos with my Polarized fit before I can get locked by the T3D. I’m swiftly proven wrong and lose 8 kill marks – my all-time record. 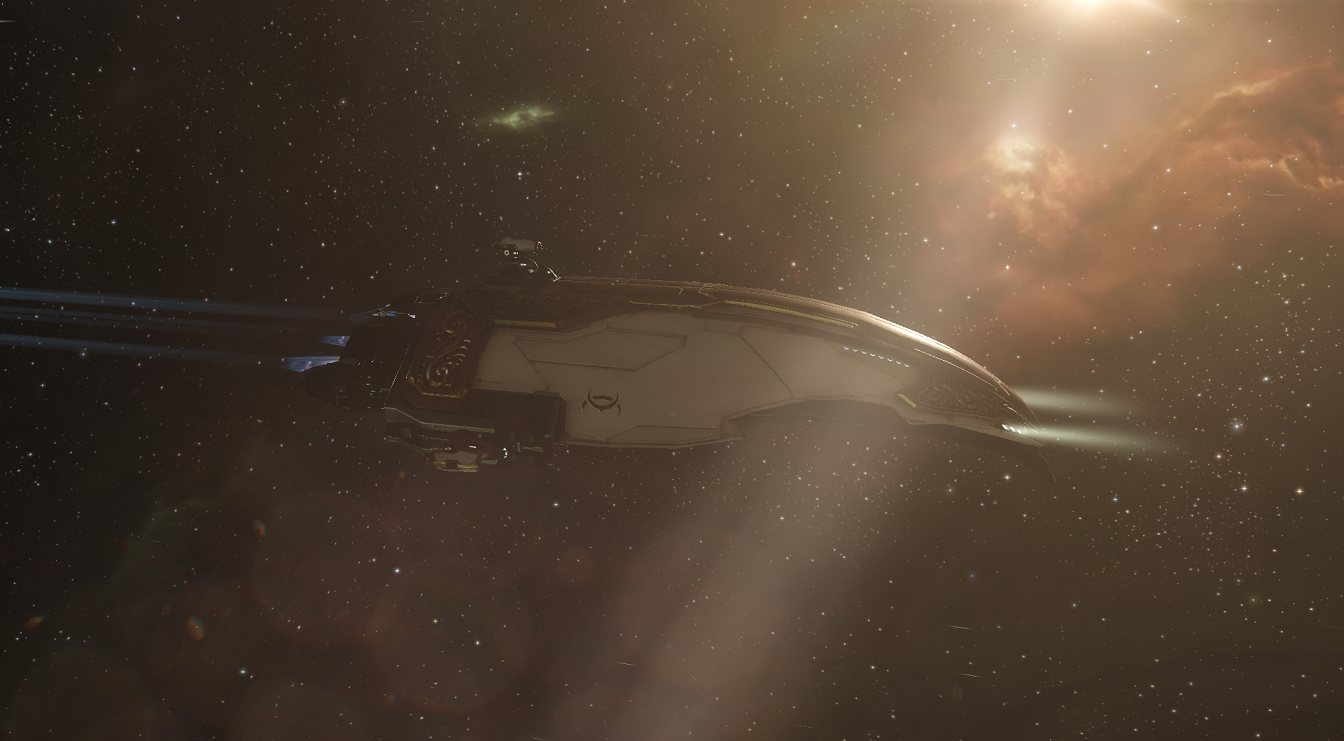 Rest in Peace, Glorious One.

I undock with another Polarized fit and notice a cyno up on a Griffin. In my blindness, I fail to see the cyno is lit on the gate, and the sentry guns volley me before I realize where I am. Now down two Polarized Impairors and firmly put in my place, I stand down for the night – but not before the Confessor pilot contracts me back the loot from my wrecks and wishes me a happy holiday.

My home situation has me doing a whole lot of nothing on Christmas day, so the terror continues. I snag an Imicus with my Polarized fit and get a few kills before seeing a cyno go up at range – the Atron from earlier! I book it to the cyno and give him a nasty surprise.

The Atron makes it known in Local that the Terror has improved.

Shortly after, a good-natured private convo invite makes its way to me from the Atron pilot.

I have a good conversation with the pilot before heading off to snag a few more cynos. Unfortunately, one of them has backup and I get wiped out.

I manage to get two more kills before my need to fix my sleep schedule ends the rampage.

The day starts out with a single corvette kill before I see a cyno lit off-grid, with a d-scan revealing a corvette and Jackdaw. I take the Polarized fit to try and snipe the Corvette before I get locked – apparently, I didn’t learn my lesson from the last time I tried to hit-and-run from under a T3D, and down I go. In a surprise gesture, the Jackdaw contracts me back my wreck loot and sends me 50 million ISK. I thank him, realizing that without his generosity I would have run out of Polarized guns to fit. With a security status of -5.9, I’d be hard-pressed to get a new set from Jita on this character!

While managing another account, I hear ships jumping in and I tab back to see a Bantam at a cyno – and three other cynos up. I switch to the Polarized fit to snag the Bantam, but the cyno decycles and it tethers back up. I warp between the other cynos. They die in rapid succession, and I manage to catch the Bantam as it lights another cyno.
A few hours later, I come back to see a cyno up just off-grid. A d-scan yields an interesting new contact – a Cormorant. I haven’t killed a Destroyer before, and I hope that he isn’t fit as I warp to the cyno. I lock him up and engage, knowing that a single shot is the end of me. I heat my guns and put my drone on him. His shields lower at an excruciatingly slow rate, making me wonder if I have any chance of taking him down. In the heat of the moment, I never stop to see if he aggresses me back – but it doesn’t matter. The Cormorant goes down!

A few Corvettes later, I decide to end on a high note.

This was actually a thrill to do. Being in a risky position with the possibility of being blapped by just about anyone or any citadel at any time made the content very real. I died quite a few times to well-played adversaries, especially those that caught on to me. Instead of being viewed with disdain, there was actually a solid respect between the victims and the Terror of Ignoitton.

I’m about to embark on a very long distance drive which will take up much of my next few weeks, so, for now, the Impairor pilot sleeps. But who knows. Perhaps one day, they will return.