ALOD: 24B ISK GOLEM GANKED WITH THE WIND

On May 9th, AssassinationsdoneWrong’s 24 billion ISK Golem was blown away by four Tornadoes, not in Kansas, but in Muvolailen (0.7, The Citadel). The Golem, an already expensive Marauder-class hull specialized for killing NPCs, was blinged-out with officer capacitor and fitting mods. Specifically: Cormack’s Modified Power Diagnostic System worth 6.5 billion ISK on its own, and Chelm’s Modified Cap Recharger worth a hefty 11 billion. 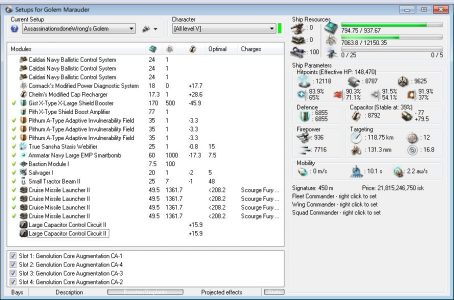 Why would he shell out that kind of dough to fit a ship like this? If he’s trying to be cap-stable while running both the shield booster and smartbomb then maybe it works for that purpose, but there’s no reason to run the smartbomb when he has light drones to deal with frigates.

Without the smartbomb, he could have bought a Tech II capacitor recharger and capacitor power relays at sane, normal people prices, and ended up with an even more cap-stable fit. Or if he absolutely needed a diagnostic module’s bonuses to shield recharge and hitpoints, he could use a Caldari Navy Power Diagnostic and have 15 minutes of capacitor to run everything, including the shield booster.

These numbers assume a full set of Genolution Core Augmentation implants, which are now more affordable than ever – 500m gets you the whole set at current prices – and are a must-buy for those who would flash a 24b ISK ship in highsec. Which you still shouldn’t do anyway.

When contacted for comment, AssasinationsdoneWrong told the tale of woe himself:

I was attacked by a suicide group when I reached the gate. the ship was destroyed within 1 second and it was not honorable for them. They are jita suicide terriorists, they should be purged.

The drawback of super active shield tank ship is that if you do not active your invulnerable field, then your em resistance is zero. But armor ships they’ve got armors and slaves implant, besides their resisitance amplifier is passive.

The good thing is that all the expensive modules are destroyed. No 36 recharger for them. Bad guys deserves bad luck.

Indeed, without its Bastion module and invulnerability fields active, this Golem fit has a mere ~42000 EHP in EFT – just within the alpha of four gank-fitted Tornados. AssasinationsdoneRight pun goes here or not cause someone on the killboard already made it.