World of Warships: How to Torpedo 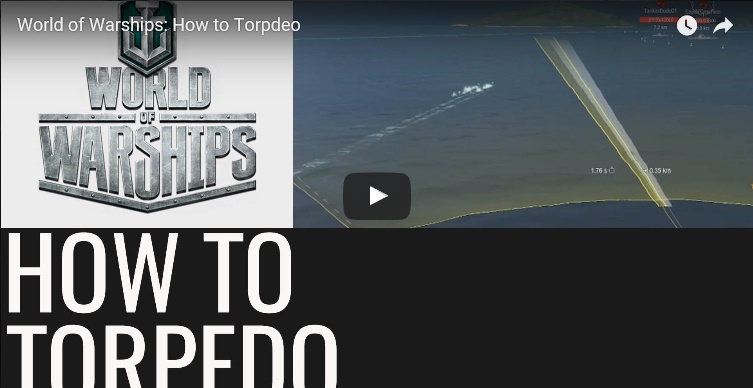 One of the most interesting parts of World of Warships is its destroyer-class vessels, and their use as torpedo-launching, death-dealing machines. Success in destroyers is tied to their player’s situational awareness, ability to maneuver, and think strategically. While all games require the first two qualities, strategy is much more closely tied to gameplay specifics and roles. Destroyers are no exception to this.

While there is overlap, the four ship classes in World of Warships offer very different playstyles from one another. For the most part, battleships act as long-range snipers with extremely poor maneuvering and reload times, so it is important for a battleship captain to be great at shooting, and planning their shots. Cruisers, on the other hand, are the ‘jack of all trades’ ship; they can deliver a lot of firepower, some can launch torpedoes, and some of them are quite maneuverable. Though they will never be the ‘best’ at anything, the fact that they can do so much makes them incredibly useful, if not sometimes feeling overpowered. Carriers provide a variety of buffs to the other ships on field, and also have the ability to attack other ships from extremely long range using a variety of different aircraft. This comes at the cost of being vulnerable to just about anything, especially destroyers.

Destroyers, like cruisers, are incredibly useful. Their fast speeds can be used to flank the enemy fleet, spot ships, support other ships with smoke and AA, and capture objectives, all while maintaining a degree of distance and stealth that the other classes do not have. A destroyer’s armament of torpedoes can rip apart much larger ships, despite the fact that a single well-placed salvo by a skilled battleship or cruiser captain can sink one quickly. Torpedoes are their greatest strength, but using them well requires a captain also be good at playing the class as a whole. Hopefully, by following the tips in the video above, would-be destroyer captains will find their performance improving, along with the fun they are having in World of Warships. Key tips include:

While these all seem fairly straight forward, it is surprisingly difficult to do this in the heat of battle. Some other tips (these are useful for any ship – not just destroyers) would be to press ‘p’ to disable AA guns’ AI, and pressing ‘x’ when selecting new targets for torpedo tubes to focus on.

Enjoy the video, and put these new skills to good use!

This article originally appeared on TheMittani.com, written by Porkbutte.