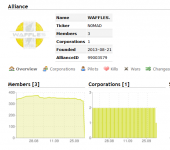 Waffles, the alliance holding name for the single active corporation Sniggwaffe, lost all but 3 members of the holding corporation.

Unnamed sources within Pandemic Horde speculated that Sniggwaffe had made arrangements within the PanFam organization to be able to maintain their independent identity and move out to occupy space in Null sec.

“It was a mutually beneficial situation where waffles is a legit entity in and of itself and PL could use the numbers boost, so it just made sense.”

Eve mails have gone out to reach members of Sniggwaffe for direct comment as to the details and timelines of the transition. Likely much will be made from some corners as to the growth of the blue doughnut and how this great low sec entity joining forces with the north will affect the greater game and PVP in general.

Editor’s Note: Reza Najafi from Waffles had this to say on Reddit earlier today.